Hedge fund manager Bill Ackman has put on another bet that companies will struggle to pay their debts, just eight months after he cashed in a $2.6bn profit from a similar trade at the start of the pandemic.

The founder of Pershing Square told attendees at the Financial Times’ Dealmakers conference on Tuesday that markets had once again become too complacent about the coronavirus.

At the start of this week he put on a new trade hedging his equity exposure with insurance against corporate defaults, he said.

“I hope we lose money on this next hedge,” Mr Ackman said. “We’re in a treacherous time generally and what’s fascinating is the same bet we put on eight months ago is available on the same terms as if there had never been a fire and on the probability that the world is going to be fine.”

He said the new hedge is close to 30 per cent the size of the bet he placed in late February, when he bought a set of huge insurance policies linked to $71bn of corporate debt.

Video: Bill Ackman: markets had once again become too complacent about Covid-19

The billionaire investor anticipated governments would be forced to shut large swaths of their economies in order to curb the spread of coronavirus, leaving many indebted companies exposed. When that swiftly proved accurate, the value of the insurance ballooned and Pershing Square exited the trade in mid-March, pocketing $2.6bn in profits after having only paid $27m in premiums.

Mr Ackman chose to plough the winnings back into equities, adding to several of Pershing Square’s existing stakes and acquiring new positions that set the company up to profit from a stock market rally. 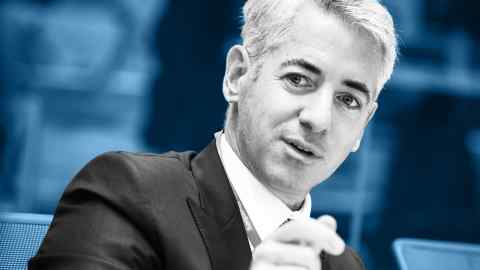 Pershing is up 44 per cent, year to date, having been down 7 per cent before the successful bet.

Mr Ackman said he remained optimistic about the economy over the long term, saying that it was likely to see a “robust recovery”, but he predicted the next few months would be “a challenging time”.

Pershing Square placed its new bet against corporate credit on the day that Pfizer and BioNTech released positive trial data on their Covid-19 vaccine, causing markets to take a sudden bullish turn.

The news was “actually bearish for the next few months,” however, Mr Ackman said, because it was likely to make people more complacent about wearing masks and less likely to view the virus as a threat.