Brazil women bring fight against sexism on to political agenda

Misogyny and violence against women have shaped presidential campaigns of activists

When a leftwing female congresswoman was described as too ugly to be raped, Manuela D’Avila’s stomach turned. The speaker was Jair Bolsonaro, the Brazilian far rightwing congressman and presidential candidate.

That feeling only worsened after the execution-style murder in March of Marielle Franco, a Rio de Janeiro councillor, a crime that many attribute to the fact that she was a black lesbian activist.

“This is the political violence we women are subjected to,” says Ms D’Avila, a journalist and presidential candidate for the Communist party in this October’s elections. Ms D’Avila, a legislator in the southern state of Rio Grande do Sul, aims to change things by boosting the presence of women in the sexist world of Brazilian politics.

“Gender inequality is brutal in Brazil,” says Ms D’Avila. Her T-shirt proclaims “Fight like a girl”, a campaign slogan of hers and reference to Brazilian women having to battle for many things in life, not least the right to be spared chauvinist attitudes.

The fact that she is running for the presidency at the age of 36 and with a two-year-old daughter gives her a glimpse of hope that “politics can be changed”. If she were to be elected, she adds, it would be a sign of something “truly rebellious”.

The campaign for the presidency is one of the most unpredictable in years and is noteworthy for the apparent rejection of the country’s established political elites.

Politics and society remain no less male-dominated, however. Although women make up 52 per cent of Brazil’s electorate, their place in politics has “continued its downward trend”, Ms D’Avila says. Female representation in ministerial posts dropped from a 25.6 per cent in 2014 to 4 per cent last year, according to a report by the Inter-Parliamentary Union and the United Nations.

In the same study, Brazil ranked 153rd out of 193 countries in terms of the number of women in the legislature, with only one in 10 congressional seats. Affirmative action quotas state that at least 30 per cent of each party’s candidates should be women, but politics remains a “very misogynistic process”, says Danusa Marques, a professor of gender and politics at the university of Brasília.

She believes this was the case with Dilma Rousseff, Brazil’s first female president, who took office in 2011 but was impeached in 2016. It is “never easy” for a woman to get the presidency, she says, let alone hold on to it.

Even if Brazilians are fed up with their political class, out of the current 17 people in the running for the presidency only three are women. Ms D’Avila, as determined as she may be to take on the establishment, is backed by only 2 per cent of the electorate, according to soundings taken of voters’ intentions.

The frontrunner, leading most opinion polls by a wide margin, is the popular former president Luis Inácio Lula da Silva. Recently sent to prison on corruption charges, however, his hopes of running in the election have taken a hit, which could provide an unexpected boost for Ms D’Avila.

Some political observers believe that she stands a chance in the presidential race if she is presented by Mr da Silva as a unifying candidate for the left. Ms D’Avila has been seen in public with Mr da Silva and has described the sentence against him as unfair.

Others pin hopes for a female president on centre-left environmentalist Marina Silva, who is taking part in her third presidential campaign and won 22m votes four years ago. Were Lula to be out of the race, she would be second in the polls behind former army captain Mr Bolsonaro.

As both a woman and black, the softly spoken Ms Silva stands for two groups that are poorly represented in politics. Still unable to read and write when she worked as a rubber-tapper in the Amazon until the age of 16, she rose to become a senator and environment minister, before breaking with Mr da Silva and challenging Ms Rousseff in two presidential elections.

“Most women suffer in terms of getting proper recognition for their work,” Ms Silva has said. Women’s earnings are about three-quarters of those of men, according to Brazil’s national statistics institute, and over the years she has become to many a voice of hope in Brazilian politics.

An evangelical Christian who has married twice and had four children, she began her political career in the 1980s working alongside Chico Mendes, the Brazilian environmentalist who helped rubber-tappers fight ranchers aiming to clear the forests and who was murdered for his pains.

Among political issues, “there is nothing more sensitive than the deforestation of the Amazon,” she says. With little party infrastructure to support her and scant access to television advertising time, Ms Silva will again face a difficult battle with Brazil’s established political party machines.

But she hits back at those who say she is too much of a “weak woman” to run. “I know what it is to get malaria five times, hepatitis three times and leishmaniasis,” she says.

“I know what it is like to work as a maid and as a seamstress.

“I am the politician who has lived the fragility of the fragile people.” 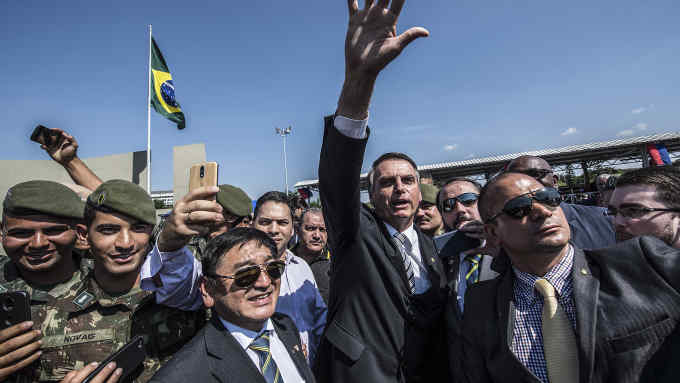