Reviving Deutsche Bank in US is priority for CEO John Cryan

Just over a year ago, when shares in Deutsche Bank were tumbling, the bank started putting out messages on screens in the lifts and lobbies of its building in lower Manhattan, assuring staff that it had plenty of capital to absorb losses and cash to pay bills.

The encouraging missives were still there in September, as the shares crashed to record lows amid settlement talks with the US government.

And the screens will be there this week, as John Cryan, chief executive of Germany’s biggest banking group, drops in on New York for the third time this year, to deliver a town-hall address to staff.

After shaking up senior management in the US and slashing bonuses, the chief executive is now taking a stronger personal grip on the American business, determined to address a slide that has threatened the bank’s position as one of the dominant forces on Wall Street.

“The footprint reduction and the product reduction has come to a halt,” Mr Cryan told investors in Frankfurt this month, as he emphasised plans to rebalance the investment bank towards corporate, rather than institutional clients.

A new shot of capital — the third in four years — should help, he said.

“What we have today, we will invest in.”

Deutsche’s US decline goes back a while. Until 2010 the German bank was in the top five by investment-banking revenues, keeping pace with JPMorgan Chase, Bank of America, Goldman Sachs and Morgan Stanley in the world’s deepest and most dependable fee pool.

But in the years since then, as Deutsche was dogged by scandals, regulatory penalties and persistent worries over the strength of its balance sheet, it slipped behind Citigroup, Barclays and Credit Suisse. So far this year it ranks ninth, according to Dealogic, in a new mini-league with Wells Fargo and Royal Bank of Canada. In trading, too, its share has fallen. 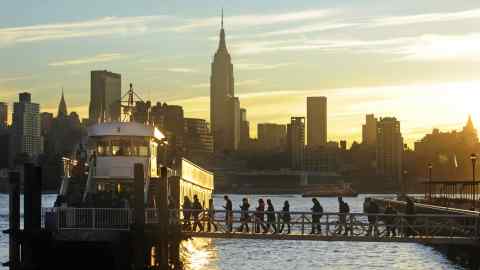 Rivals have noticed. One top banker at Morgan Stanley notes that Deutsche’s revenues from debt trading in the fourth quarter came to €1.38bn, in line with Morgan Stanley’s own. “But that’s their strongest business — and it’s our weakest,” he says.

Hence the new sense of urgency from Mr Cryan, who spent 24 years as a banker at SG Warburg and UBS before joining Deutsche in 2015.

The key to a revival in the US, say some of his new crop of leaders in the US, is to pick battles wisely.

Instead of trying to compete on lending against Citi or BofA, which have cheap funding from their retail-banking networks, Deutsche is stressing creativity and strength of ideas.

Bankers should see themselves as entrepreneurs,* says Mark Fedorcik, who was named head of corporate finance Americas last September.

“People here have a chip on their shoulder,” says Mr Fedorcik, a loans specialist who started at Bankers Trust and joined Deutsche in the 1999 merger of the two. “There’s a feeling like, ‘we’re not going to outbalance sheet them or outman them, but we can outsmart them.’”

That means cutting a lot of clients adrift.

In October 2015, when Mr Cryan was about a month into his new role, he said that Deutsche would cull about half of its clients in its global markets and corporate and investment-banking divisions, on the grounds that returns were “inadequate”.

That effort is now well under way: in an internal memo last December, Deutsche said that it was cutting about 3,400 clients across debt and equity sales.

It also means paying a premium to attract talented staff.

Recruiters in New York report that junior bankers on base salaries of $200,000 are being offered in the region of $325,000 to join Deutsche — about 20 to 30 per cent higher than the rest of Wall Street. Mr Fedorcik says he wants to hire 16 managing directors and directors this year in the corporate and investment bank, while the markets side of the business plans to add a similar number.

What is the pitch? Noel Volpe, chief operating officer of corporate finance Americas, says Deutsche offers a culture similar to the one he experienced at Donaldson Lufkin & Jenrette, the brokerage swallowed up by Credit Suisse in 2000.

“We’re the leading global investment bank with a boutique spirit,” he says.

Plenty of senior people have gone. Jeff Urwin, the 61-year-old global head of investment banking, is stepping down less than two years after joining with great fanfare from JPMorgan. Bill Woodley, chief executive of Deutsche’s US holding company, is also rumoured to be on his way out.

But he cites the bank’s leading role on last month’s Snap IPO, the biggest in more than two years, as evidence of its potential.

“In one of the worst years of the bank . . . we grew revenues about 4 per cent, year on year,” says Mr Fedorcik.

“If you can do it in a year like that, what are you worried about?”

When Deutsche cut its 2016 bonus pool by almost 80 per cent, it knew it would lose people. Sure enough, recruiters’ inboxes started filling up within days.

But much of the churn is deliberate. While it wiped out all individual bonuses for employees above vice-president level, Deutsche handed out €1.1bn in special “retention awards”, half-cash and half-stock, to 5,522 employees it really wanted to keep.

Some of those awards, which are deferred for up to five years, were very good indeed. Across the bank, 316 employees got more than €1m in total.

By making it clear how greatly people are valued, or not, Deutsche was presenting them with a clear “view of the future”, says Dennis Tupper, co-head of US rates and municipals.

“It’s a great positive: employees have been challenged to invest in this place, or invest somewhere else,” he says.

One Wall Street recruiter puts it more bluntly. “It’s binary: they’ve either taken care of you, or you were completely screwed.”

* This has been amended since first publication.