Energy groups urged to step up as net zero champions

Nathalie Thomas in Glasgow and Chris Tighe in Teesside

Oil and gas companies should lead investment in clean energy technologies rather than waiting for government subsidies if they want to survive in a world of net zero emissions, according to the UK’s chief climate adviser.

The fossil fuel industry argues it can develop technologies such as carbon capture, usage and storage (CCUS) and cleaner fuels like hydrogen to help in the fight against global warming. But most projects to develop them are still in the early stages and energy companies say government incentives are required for them to be developed at scale.

However, in an interview with the Financial Times, Chris Stark, chief executive of the Committee on Climate Change — an independent, non-departmental government body, rejected this.

In the UK, CCUS has been under discussion for more than a decade but no large-scale project has been developed after two government subsidy schemes, launched in 2007 and 2012, were cancelled. Companies involved in previous projects, such as the oil major Royal Dutch Shell, dropped their plans after the subsidies were scrapped.

A number of oil majors are again backing CCUS in Britain as the country aims to cut greenhouse gas emissions to net zero by 2050. But developers say the projects will rely on government incentives.

“To support the development of a world-class CCUS industry that the UK can export and use to drive economic growth, we need government support,” said Andy Lane, managing director of the £4bn-£5.5bn Net Zero Teesside project, the leadership of which was taken over last week by energy companies BP, Eni, Equinor, Shell and Total.

The Department for Business, Energy and Industrial Strategy last year launched a consultation on possible business models for CCUS and the Conservatives’ general election manifesto last year pledged £800m to develop the technology. Ministers have promised more details in next week’s Budget.

Mr Stark questioned the seriousness of commitments by the oil and gas sector to develop new technologies that can help cut emissions if their plans are dependent on government subsidies.

“If we are going to wait for that to take place then I don’t think these are serious commitments. That sector itself will need these technologies to be properly developed if they are to play a role in a net zero society in the future. It seems to me we should be looking to the oil and gas sector to take a lead in that.”

Environment groups such as Greenpeace have accused oil and gas companies of hiding behind “unproven” technologies such as carbon capture — burying CO2 in depleted oil and gasfields — to simply carry on producing polluting hydrocarbons and Mr Stark’s call will add weight to these claims.

Mr Stark said the risk of oil and gas companies being left with hundreds of billions of dollars worth of stranded assets as more industries reduce dependency on their products should be “a meaningful incentive to get involved in hydrogen production and carbon capture and storage”.

Oil and gas companies responded to Mr Stark’s arguments by claiming that only the earliest projects will need substantial support and costs should fall for subsequent initiatives.

A spokesman for OGUK, a trade body for the UK oil and gas industry, said that for CCS to be “given every chance of success, proactive and collaborative working with industry, governments and regulators is required so that we can avoid repeating any mistakes of the past . . . and ensure we have a workable framework”.

Mr Stark, a former climate adviser to the Scottish government, was speaking to the FT in Glasgow, his home city and venue for crucial UN climate talks in November. 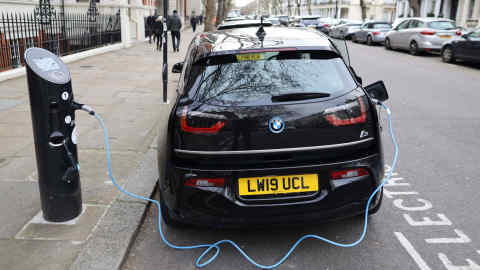 Environment campaigners hope the summit, known as COP26, will reinvigorate global efforts to curb climate change after the last talks in Madrid in December ended inconclusively. But the UK’s presidency of COP26 got off to a shaky start when the government sacked the event’s former leader, Claire O’Neill, last month and rumours emerged of a possible change in venue.

Mr Stark said the events of recent weeks had “sent a poor signal” and it was “disappointing to see how slow out of the blocks we [the UK] have been”.

The UK could still turn things around, Mr Stark said, but it would require “triple A diplomacy” from the British organisers, now led by new business secretary Alok Sharma.

Mr Stark said a “really strong” theme of the summit could be the adoption of net zero emission targets by more large corporations, some of which are “more important than some national [emissions reductions] plans” given the global scale of the businesses involved.

He cited a plan by the global technology giant Microsoft to be “carbon negative” by 2030 as a “template” for other big companies but also expressed concerns about corporate offsetting schemes, which typically involve businesses purchasing carbon credits to counter their own emissions, or planting trees.

“If every corporate is relying on tree planting as a means of offsetting their emissions then we are not going to make as much progress as we think,” said Mr Stark.

Get alerts on UK energy when a new story is published