May 4, 2018
Jump to comments section Print this page

In a packed first-floor classroom in Khayelitsha, one of the poorest townships in Cape Town, 50 young teenagers in their uniforms of white shirts and purple jumpers are sitting behind their desks for a session led by four moderators just a few years older.

“There is no teacher here — you can speak freely,” says one of the session leaders, dressed in a bright yellow T-shirt. “What is Aids?” he asks in a mixture of English and Xhosa as he paces the room. “What is the most common way to transmit HIV?”

There is no giggling but plenty of discussion, as the 13-14 year olds chat in groups and then volunteer their answers, winning approval from the leaders with high fives and applause. “Snap your fingers, don’t clap — we are not in church,” he adds. Over 40 minutes, he and his colleagues gently make other points: “You have greater risk if you have more than one sexual partner.”

The session is part of a programme run in a number of schools in the area and replicated across other African countries by Grassroot Soccer. The organisation is a charity set up at the turn of the millennium to respond to one of the continent’s greatest health calamities: high rates of infection with HIV, which left untreated leads to Aids.

It is an example of several programmes seeking to raise funding, tap global expertise and influence young people’s lifestyles in order to ease the prevalence of the virus in South Africa. The charity, like others, faces challenges in becoming sustainable and tracking effectiveness.

Grassroot Soccer was founded by Tommy Clark, who originally moved from Scotland to Zimbabwe in the early 1980s when his father, a professional footballer, decided to emigrate and start coaching in the country.

“I loved being there [in Zimbabwe], but we had to flee and my plan was always to get back to Africa,” he recalls.

Before leaving Zimbabwe, Clark says he used to volunteer in the country’s townships where he became troubled by the Aids epidemic. This inspired him to train in the US as a paediatrician and, with the support of his medical school, he created Grassroot Soccer in 2002, initially relying on small donations from individuals. 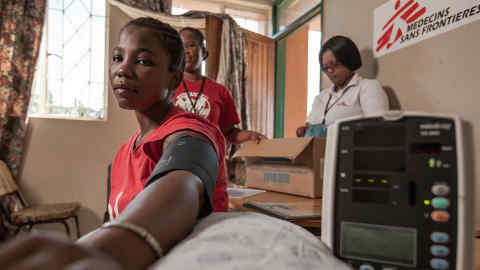 That changed with larger grants from philanthropic foundations after he published an academic paper highlighting his approach, which drew on the work of Albert Bandura, a psychologist at Stanford University. The professor’s “social learning theory” argued that changing behaviour worked best through the use of role models — Grassroot Soccer’s school mentors: older adolescents respected by those they sought to influence.

“Things have changed quite a bit,” says Clark. “In the early days, no one knew what was causing HIV. Now we understand the interplay of all sorts of factors: it is not just about using a condom, but gender equity, how women can avoid getting into violent relationships, and getting people into the healthcare system and staying on treatment.”

Grassroot Soccer’s programmes are heavily linked to football. Its mentors are called “skillz coaches” and its training programmes draw on ideas from the game. In some outdoor sessions with participants, they aim to dribble a ball between four cones representing high-risk activities that spread HIV: unprotected sex, alcohol, multiple concurrent partners and “sugar daddies” [older men who trade gifts for sex with younger women].

Close to the school in Khayelitsha, the organisation operates a small community centre where it arranges football matches on local pitches, as well as education sessions and HIV testing. The site was donated by the local authorities and redeveloped in the build up to the World Cup in South Africa in 2010. The building is protected by a high fence and bars on the windows, following break-ins during which computers were stolen.

Yet the site marks significant progress on a previously dark, undrained swamp where people returning from work at the nearby station were frequently mugged.

Some are sceptical about ‘behavioural change’ programmes

Assessments by Grassroot Soccer show promising results in rising HIV diagnosis and treatment. Yet progress is not easy. The “gold standard” would require regular testing of participants to see whether they are and remain free of the virus. Yet local schools do not allow HIV testing on their premises and a requirement for parental consent reduces the number of school children willing to undergo tests offsite.

While the growing availability of antiretroviral drugs has helped reduce deaths among HIV victims, new infections continue to rise. In Khayelitsha, paradoxically, the prevalence of those with the virus has doubled over the past decade as more people are surviving thanks to treatment. Some are sceptical about the effectiveness of “behavioural change” programmes. Professor Glenda Gray, president of the South African Medical Research Council, places greater emphasis on “biomedical” approaches — from diagnostics and drugs to circumcision and potentially a future vaccine. 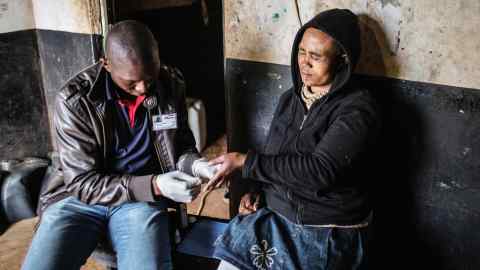 “Humans are hot and passionate and it’s hard to control human behaviour, so we have to protect them,” she says. “Prevention has been quite cold and moralistic. We want to find biomedical interventions like a vaccine so they don’t have to navigate condom use, abstinence or being faithful.”

That reflects the views of some of the mentors in Khayelitsha. “Boys know but don’t care about HIV,” says one. “There is a view that you must be a ‘player’ with more than one partner and that sex with a condom is not nice. Girls also think that the boys are weak if they only have one partner.”

Another problem for Grassroot Soccer is whether football appeals to a sufficiently wide audience, if it excludes many young women. The significant number of children in the classroom who are overweight also raises the question of whether the programme should begin focusing on prevention of other diseases such as diabetes.

A final challenge is that the initiative, like many of its kind working with young people, has yet to become truly rooted in the community: it remains heavily reliant on foreign corporate and individual donors rather than local government, businesses or individuals. “Getting local support is difficult,” says Clark. “We are thinking how to better use our alumni mentors.”

These locals, often themselves school drop-outs from Khayelitsha, are the pride of the programme — energetic, engaging and entrepreneurial. As Brian Brink, the former chief medical officer of miner Anglo American who sits on the charity’s board, argues, the programme has helped develop ideal employees for local businesses to hire. But with unemployment so high, that is also a structural issue beyond the power of groups like Grassroot Soccer to resolve.