When Prospa launched in Australia in 2011, the online lender to small companies had an intimidating task before it: taking business from the country’s biggest banks. Small companies in search of working capital had long relied on traditional lenders, before the global financial crisis curtailed banks’ appetite for risk.

Seven years on, Prospa has topped this inaugural list of high-growth companies, in revenue terms, from the Asia-Pacific region. The expansion of digital services combined with a desire for flexible financing fuelled Prospa’s growth.

It is hardly a lone disrupter. Hot on its heels at the top of the list are New Zealand-based fintech firms Pushpay, a mobile payments service, and KlickEx, a foreign exchange service. The three companies reflect the rise of fintech in the region. In its various forms, tech contributes more than a fifth of the companies on the list.

Compiled with Statista, the research company, the FT 1000 High-Growth Companies Asia-Pacific list includes businesses spanning 11 of the region’s more developed markets, from Australia to Taiwan (see full methodology). The companies are ordered by their revenue growth between 2013 and 2016.

The research seeks to highlight independent companies exhibiting standout growth, achieved mostly organically rather than through acquisitions, to pinpoint the future corporate growth engines of the region.

Although a Sydney-based company took pole position, Tokyo emerged as the city with the largest number of high-growth companies, accounting for 134 on the list, followed by Mumbai with 60 and Sydney on 52. Investors are keen to capitalise on a growing affluent population using technology (169 companies), ecommerce (22) and fintech (15).

“We all know that we’re now living in the ‘new economy’ where ecommerce is here and online shopping is prevalent,” says Joanna Kwok, a fund manager at JPMorgan Asset Management, based in Hong Kong. “This is something growing steadily, and it’s taking a lot of share from traditional retail shops, all over Asia.”

Figures from PwC and UBS found that in 2016, for the first time, there were more billionaires in Asia than in the US. Ms Kwok says the increasing affluence within the region means “consumers are upgrading”, which is boosting sectors such as insurance and consumer goods. 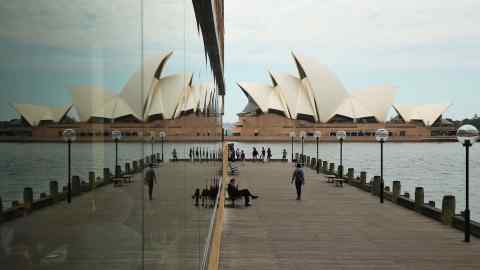 Economic conditions have been favourable. A decade of low interest rates and a flood of easy money from central banks’ quantitative easing policies have helped fuel capital inflows into the region. Younger companies, offering higher yields that reflect higher risks, have benefited.

“A lot of companies have been raising funds through venture capital, that’s been growing recently over the past couple of years in Asia,” says Michael Wu, a senior equity analyst at Morningstar. “The venture capital industry wasn’t there 10 years ago, but it has really ramped up.”

Most of the more established companies go on to list on an exchange, says Mr Wu, prompting Asian bourses to change their rules in order to attract more early-stage companies. Exchanges are particularly keen to attract those in the biotech, health and software sectors, he says.

Stock exchanges across the region have been vocal about their intention to secure lucrative listings from high-growth companies. Australia’s bourse recently said it was seeking to become the “Nasdaq of the Asia-Pacific” after nearly doubling its number of technology floats in the past five years.

Hong Kong and Singapore’s stock exchanges have announced plans to attract more companies by paving the way for businesses with “dual-class” share structures to list. These give some shareholders greater voting powers than others.

The dual-class structure has gained traction among technology groups globally, as founders seek to retain more control over their company.

Charles Li, chief executive of Hong Kong’s exchange, has said that companies with dual-class structures permitted to list must be deemed “innovative” — for example operating in new sectors such as fintech — providing a boost for fledgling companies exhibiting high growth potential.

Singapore’s bourse says it will be less prescriptive in the type of company using a dual-class structure that it will allow to list. As Loh Boon Chye, chief executive of SGX, told the FT in January: “Singapore is making huge efforts to transition into the ‘new economy’. It’s recognised as a leading hub for start-ups that need a capital structure to scale up rapidly.”

But such developments have raised corporate governance concerns. Investors are worried about having fewer voting rights, or fear that lowering the barrier to entry could open the door to lower-quality companies. “I don’t think exchanges want to relax regulations to a point where they allow any company to list; they want to attract quality firms,” says Mr Wu.

To compile the FT 1000, tens of thousands of companies were identified by Statista through databases and publicly available sources, and invited to participate.

Compilers also examined the official revenue data of more than 14,000 public companies in the 11 participating territories. Privately held companies were required to verify their revenue figures by providing a form signed by a senior executive.

Researchers checked the revenue data, whether the revenue growth was primarily generated organically and whether companies were independent (ie not a subsidiary or branch office). Given concerns about data verification and company independence, mainland China-based companies were excluded from this inaugural FT 1000 Asia-Pacific list.

There were a number of other challenges for the researchers. In comparison with its sister list, the FT 1000: Europe’s Fastest Growing Companies, reply rates in Asia-Pacific to the call for registration were low — something that did not change even when companies were contacted by phone, says Felix Kapel, a Statista analyst.

“It was difficult to contact the appropriate contact person in some countries. For example if the wrong person was contacted in the company, companies tend to ignore the request. That’s not the case in Europe,” adds Mr Kapel.

But despite such difficulties, the region’s economic growth and maturing capital markets suggest the profile of the high-growth companies of Asia-Pacific is on the rise.