After half a century, equal pay remains a battle to be won

There are five key questions for journalists to get to the heart of a story: who, what, when, where and why. Likewise, for police investigators and academic researchers. They are the same whether the story is breaking news, an unlawful act or a social ill.

Pay discrimination is all three, and demands urgent answers to those five questions. My own experience has made me think hard about them.

Who: As a senior BBC journalist in my mid-fifties, I discovered by accident that I was a victim.

What: Pay discrimination or unequal pay. As BBC China editor, I was doing equal work to male peers but being paid not much more than half — despite having made equal pay a condition of accepting the role. The BBC said the scale of the pay disparity was the result of an oversight but that a residual disparity between me and the North America editor was justified due to my “growth and development” and his “profile and experience”.

When: For four years in the China editor post and, perhaps, in previous roles — nearly half a century after the UK enacted equal pay legislation.

Where: At the national broadcaster, an organisation ostensibly committed to fairness, gender equality and truth telling.

Why: The answer is complex, but it comes down to the problem that pay decision makers were unconscious of the risks of their own gender bias and had suffered no consequences for that bias, so it had become entrenched. Employers who break equality law often do so with virtual impunity. Individual women are then left to uphold the law at unsustainable personal cost in career damage, stress and financial risk.

You can be a victim of serious discrimination for years without knowing. I was 55 when I learnt these facts of life

My own case was resolved only when I threatened litigation. For many women that does not feel like a choice, and in the absence of cure, prevention is the only course. Which brings me back to those universal five questions: who, what, when, where, why.

The “who” is all of us. If we are female, we are at risk of pay discrimination. It is driven by entrenched gender bias, some of it unconscious but some of it conscious because of assumptions about women’s unequal caring duties. The risk is highest in workplaces where pay is discretionary and secret. There you can be a victim of serious discrimination for years or even decades without knowing. I was 55 when I learnt these facts of life.

The “what” is the pay gap that opens up between men and women even when they are doing the same work or work of equal value. This unequal pay can be cumulative. Pay disparities grow over a career. They cost hundreds of thousands of pounds in an average working life and even more over retirement due to loss of pension earnings. 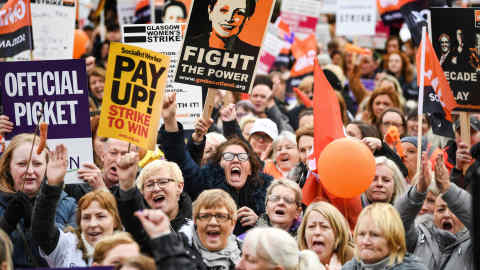 Pay discrimination is also a denial of value. Women often internalise it as some kind of failing in themselves but in fact it is an ethical failing in their employers. It is also an economic failing as it means a waste of talent and misallocation of resources. And, of course, it is a breach of the law.

The “when” can happen at any time in a woman’s working life, but often as she becomes older and more senior. In many workplaces, the “motherhood penalty” means flexible working and part-time working are heavily penalised in progression and pay, making women intensely vulnerable to pay discrimination in the second half of their careers.

As for “where”, there was a chorus of “Not here!” from UK employers when gender pay gap reporting for large employers became mandatory in 2017. Many claimed they had startling gender pay gaps because men dominate senior roles.

That answer raised a further set of questions. But the confidence of employers in ruling out pay discrimination was itself puzzling. The regulator, the Equality and Human Rights Commission, points out that without careful equal pay audits, employers cannot know they are not discriminating. Academic evidence suggests employers that exhibit confidence that gender discrimination is no longer a risk in the workplace tend to be precisely those who discriminate. Blind spots are dangerous.

The evidence also suggests any large employer with a competent human resources department should be aware of the research on bias and working hard to counteract it.

At the national level in the UK, only one-third of the gender pay gap is explained by factors that the Office for National Statistics is able to identify. To judge from my own experience and that of many others, a significant measure of pay discrimination is lurking in the unexplained two-thirds. So my wider answer to the “where” of pay discrimination is that it is everywhere that employers are not assiduous in weeding it out. 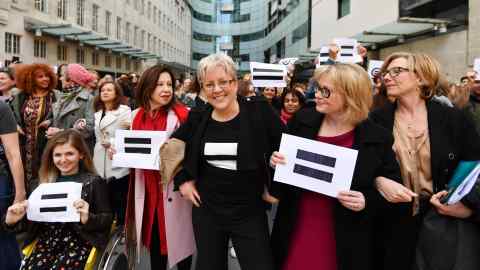 The “why” of the matter is the hardest question of the “five Ws”. I wrote a book, Equal, to answer it, both in my own story and for women in other workplaces.

But answering the who, what, when, where, why brings us to the most urgent question of all: “how”. How do we beat this? Next year will mark the half century of equal pay legislation in the UK and yet unequal pay is alive and well.

I now know just how well-armed and how cunning an enemy it is. “How” is where I concentrate my story. I want women to feel confident to look this monster clearly in the eye and vanquish it, so that neither you nor I, nor our daughters and granddaughters, will have to face it in future.

The writer is a BBC journalist, and the author of ‘Equal: A Story of Women, Men and Money’