We use cookies (opens in new window) for a number of reasons, such as keeping FT Sites reliable and secure, personalising content and ads, providing social media features and to analyse how our Sites are used.
Manage cookies
Accept & continue
Brexit

Vote Leave is hoping to secure the backing of British Asians by telling them that if Britain quits the EU, it will mean more immigration from elsewhere in the world.

The official Out campaign is drawing up leaflets aimed at Punjabi, Hindi and Urdu speakers arguing that a British exit from the EU would help to stem the flow of Eastern Europeans into the UK — allowing more incomers from Commonwealth countries to take their place.

Saqib Bhatti, a board member for Vote Leave, said English-language leaflets had been sent out to Muslim voters, while others in different languages were set to follow.

The pamphlets argue that people with EU passports can just “walk in” to Britain.

The leaflets also emphasise the increasingly far-right tinge to politics in Slovakia, Hungary, Austria, Germany and Denmark. “We don’t want them influencing our laws and our policies,” said Mr Bhatti.

He also said a leaflet from the rival Conservative In campaign promised to stop non-EU families from coming to Britain.

Vote Leave recently marshalled 80 business and community leaders from Commonwealth backgrounds to write to David Cameron calling for Britain to take back “autonomy in the field of migration”. The letter said: “Whilst EU citizens enjoy freedom of movement and no restrictions on their stay in the UK, those coming to the UK from outside of the EU face greater restrictions.”

The campaigning may come as a surprise to the millions of white working-class citizens who plan to vote Leave because they want all immigration to be severely curtailed. The government has promised to bring net migration below 100,000 a year; the most recent number was 362,000.

A recent poll by Opinium suggested immigration was the issue most likely to affect how Britons will vote: 49 per cent said it would influence their decision. Among Out supporters it is the primary factor for 72 per cent.

Concerns about immigration from eastern Europe are not confined to white working-class areas.

On Brick Lane, in East London, famous for its curry houses, immigration will be a factor in people’s decision-making. Ahaduz Zaman, working at Zaman Brothers Cash & Carry, has not yet decided how to vote in June. But he said: “If we’re not in the EU they will be able to stop so many Europeans coming over — too many coming here, taking jobs and using public services.”

Paul Karir, manager of Karir & Sons, a clothing shop, complained about East Europeans claiming British benefits. “I think the country is full at the moment,” he said.

Vote Leave argues that second-generation immigrants bear the brunt of new migration because they tend to live in the same areas and compete for the same low-skilled jobs and housing. They will get a vote in the referendum while recent incomers from EU countries will not.

The argument that limiting European immigrants will give Commonwealth citizens easier access has been increasingly put forward by the Out campaign.

Gisela Stuart, the MP who chairs Vote Leave, has questioned why a Bulgarian taxi driver can claim child benefit for his offspring in another country.

Priti Patel, the employment minister, was appointed by Mr Cameron as Britain’s first “UK Indian diaspora champion”. She is using that platform to undermine the Cameron-led Remain campaign as she attacks the government’s “biased” immigration policy. 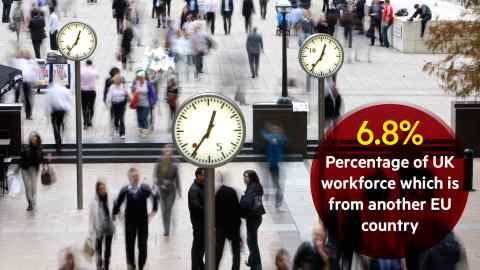 “Temples and gurdwaras have difficulties bringing priests in. Our communities struggle to get visas for kabbadi players to come and share their phenomenal sporting talents in this country,” she told India’s Economic Times.

Ms Patel warned this week that curry restaurants were being deprived of high-quality chefs because “uncontrolled immigration” from the EU had led to tighter controls on talented migrants from elsewhere.

Pasha Khandaker, the president of the Bangladesh Caterers Association, said leaving the EU would ease the staff shortage in his industry. He is organising an anti-EU protest outside parliament — although the police will not allow it until July, weeks after the referendum.

But Seema Malhotra, a Labour MP, accused Brexit campaigners of blaming Brussels for decisions made by British ministers.

She said the government could take other measures to deal with the shortage of Indian and Bangladeshi restaurant workers, such as putting them back on the “shortage occupation” list.