Beyond the white cube: the co-founders of Jupiter Artland on their contemporary sculpture park

Nicky and Robert Wilson discuss building their collection, the pleasures of outdoor art — and its one downside: lawn mowing

“I must be a nightmare boss!” exclaims Nicky Wilson, the co-founder and driving force behind Jupiter Artland, the contemporary sculpture park outside Edinburgh that she created with her husband Robert, and which marks its 11th anniversary this year.

Cradling a cup of tea, she is taking a brief rest before “going down to mend a bit of the Gallaccio, help with the Boltanski, work a bit on the Jencks — I’m very hands on, I literally do everything. That’s why I look so bedraggled!”

In fact Wilson doesn’t look bedraggled at all; she is healthily tanned and neatly dressed in jeans, white shirt and a loose black sweater. And she is friendly and open — apparently not the nightmare boss she claims to be.

We meet in a tea room at Jupiter, where staff are making final preparations for the summer reopening of the park. Gardeners are mowing Charles Jencks’ “Cells of Life”, the imposing sculpted mounds of grass which have become the most recognisable project of the park. “It takes two gardeners two days a week to maintain,” says Wilson. She is soon off to her tasks: some amethyst pieces have become detached from Anya Gallaccio’s underground chamber, “The Light Pours Out of Me”, a pit surrounded by a path of obsidian. And the Japanese bells attached to Christian Boltanski’s “Animitas”, sited on an island in the duck pond, need attention.

Nicky and her husband Robert have created Jupiter in the 100-acre estate around their home, the 17th-century Bonnington House near Edinburgh, where they have lived since 2005. Both came from artistic backgrounds — Robert’s parents, who lived in Belfast and Dublin, collected Irish painting, while Nicky had trained as a sculptor.

“I wanted an outlet for my creativity, and we wanted the land to be useful,” she says. “We had each other and we had the means, and Jupiter is a wonderful example of how something can evolve out of an idea.” Those means come from Nelsons, the homeopathic healthcare company established in 1860 and known above all for its “Rescue Remedy”.

They chose to make an outdoor sculpture park because, says Nicky, “It makes people confront art in an easy setting, not the white cube or institution which can be difficult. Art in a landscape is much easier.”

And key to their mission is a strong educational programme; the park closes between September and May to the public, but hosts manifold school visits, workshops and more. While we are chatting, bright voices can be heard in the courtyard, where a group of four- and five-year-olds are being taken around. Nicky pauses briefly, listens, and exclaims: “Sweet!”

Later, when I talk to Robert, he explains: “The educational programme is the very essence of what we are about. That was the inspiration behind Jupiter — the perception-changing power of art and how in the right environment art can make people really stop and think, particularly young people.” The park has already hosted 50,000 free learning visits. And Robert adds: “We are raising money for a bus because many schools, even if they want to come, can’t actually afford the transport.”

Commissioning around one piece a year, as well as acquisitions, the Wilsons have now 35 permanent works dotted around the park, each in sites selected by the artist. Artists are invited to look around, in the fields around the Jencks earthworks or in the more densely wooded wilder­nesses, to choose their spot. “The landscape speaks to the artist,” says Nicky.

Works can be large and striking, such as the first sculpture installed, Marc Quinn’s “Love Bomb”, a colourful rendering of orchids, or quietly contemplative, such as Shane Waltener’s knitted web, “Over Here”. The last commission but one was “The Quarry”, towering columns in the form of metal lassos by Phyllida Barlow; next, a swimming pool in the form of large water splash, lined with vivid tiles and designed by the Portuguese artist Joana Vasconcelos, will be inaugurated at the end of July. Elsewhere there is a crouching giant overlooking fields, bright yellow on my visit, by Antony Gormley, and a stone house, startlingly filled with rock, by Andy Goldsworthy.

The park also hosts two exhibitions a year: currently on show is Daniel Lie’s The Negative Years, an immersive installation using materials from the surrounding landscape, including native fungi. And in a new departure, in August the Trisha Brown Dance Company will reconceive some of its dance pieces in the park, along with part of the company’s film archive, as part of the Edinburgh International Festival. It is the first time Jupiter has worked with the EIF, although Robert is a past chair of the festival; he is now chair of Creative Scotland.

Next Act
Where to experience the arts in a landscape 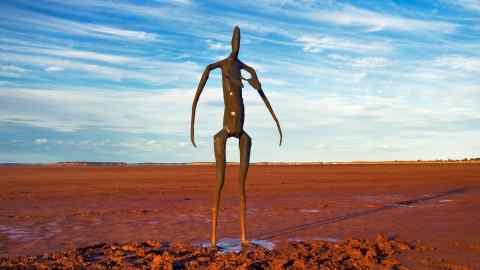 Running the park is, says Nicky, “not the easiest route to take, it takes an enormous amount of resources” — she emphasises the “enormous” — “You have to be completely dedicated. It has been my life, my baby.”

The project is very much a partnership, even if Robert is often in London. “One of the things we love about Jupiter is that it enriches every part of our lives,” he says. I ask if they ever disagree on the choice of an art work. “We have healthy disagreements sometimes,” he admits. “Often the art work demands a thorough discussion to ensure we are giving the respect to each individual art work and the artist’s vision.”

I wonder if they might finally run out of space. “Space? We’re not there yet. The question is how do we maintain a sculpture park that really breathes,” says Robert. “An artist will often see something in an area that has previously gone unnoticed — it’s almost as if nature is joining in the effort to create a magical place. It’s amazing the transformation that goes on through that process.”

Later I tell the Scots-born Elizabeth Ann Macgregor, now director of the Museum of Contemporary Art Australia, about my visit. “Jupiter is fantastic,” she says. “The Wilsons are genuine philanthropists, and the park is different from anything else — it’s got a very special vibe.”

Open every day until September 29 jupiterartland.org