Martin Arnold in Frankfurt and Patrick Temple-West in New York

A global agreement is within reach that would require all listed companies to disclose the risks they face from climate change in a standardised way, the governor of France’s central bank has said.

François Villeroy de Galhau told the Financial Times that talks between government and central bank officials on new climate risk disclosure rules had progressed faster than expected and that an international framework could be agreed at November’s UN COP26 climate conference in the Scottish city of Glasgow.

“Proper disclosure should become mandatory — I would expect this as a first step,” said Villeroy. “Nobody expected six months ago for us to go as quickly as we did and to say perhaps we could have a positive conclusion on mandatory disclosure at the COP26.”

French banks and insurers have been required to disclose their exposure to climate change for several years, while the UK plans to make such disclosure mandatory for all its listed companies from 2025 and the EU is reviewing its rules on non-financial disclosure.

US president Joe Biden issued an executive order in May instructing Treasury secretary Janet Yellen to work with regulators on devising a plan to “reduce risks to financial stability” from climate change.

If as a financial institution you don’t manage your climate related risks, and if as a supervisor you don’t look at them, you miss your . . . duty to financial stability

John Kerry, Biden’s climate envoy, said recently the US would probably “join with Europe” to require climate risk disclosure by companies. Separately, Yi Gang, governor of the People’s Bank of China recently indicated his support for the EU’s so-called green taxonomy and is expected to indicate support for other disclosure measures later this week.

“We should make progress on these two legs, mandatory and standardised [disclosure] rules,” said Villeroy, who on Wednesday gave the opening speech at the three-day Green Swan conference on the financial risks of climate change. “We should start with mandatory, but standardised would be the following step.”

The list of speakers at the event — organised by the Bank for International Settlements, Banque de France, IMF and 90 central banks and supervisors comprising the Network for Greening the Financial System — reflects the growing importance of the issue. It features the first public joint appearance by China’s Yi, Jay Powell at the US Federal Reserve and Christine Lagarde at the ECB. Andrew Bailey at the Bank of England and others also gave presentations.

Speaking at the conference Jens Weidmann, head of Germany’s central bank, said for the first time that he would support a “decarbonising” of ECB monetary policy. The Bundesbank boss’s comments mark a shift; he had been regarded by analysts as one of the main opponents to Lagarde’s push to make the ECB’s monetary policy greener as part of its strategy review.

Weidmann repeated his call that the ECB “should only purchase securities or accept them as collateral if their issuers meet certain climate-related reporting obligations”.

But he added that if this was unworkable or took too long, the central bank may need to “adopt alternative measures to properly incorporate climate-related financial risks into its risk management”. He cited the example of “limiting the maturities or the amount of corporate bonds of certain sectors and issuers in the Eurosystem’s monetary policy portfolio”.

Villeroy told the FT that more non-financial companies were reporting on their climate risks but this was “not yet harmonised”. Pressure from investors would force them to disclose more information in a standardised way, he added.

Global regulators launched the Task Force on Climate-related Financial Disclosures (TCFD) in 2017, specifying the annual emissions data and climate risk analysis to be included in annual reports. Last year the TFCD said more than 1,500 organisations had expressed support for its standards but many had only adopted them partially if at all.

Villeroy described the push to tackle climate change risks as “the most dramatic change I have seen in my professional career”. 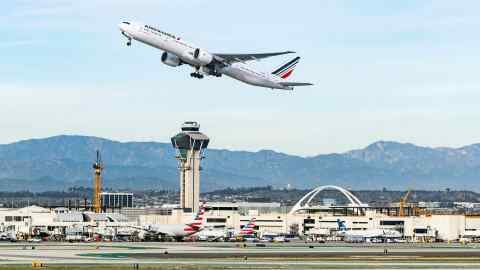 The French central bank this year published the results of its debut stress test of climate risks at the country’s largest banks and insurers, measuring how they would fare under different scenarios over the next 30 years.

The development of credible stress tests on climate risks would be a “game changer” in ensuring the financial system was prepared for global warming, Villeroy said. He added that transition risks — such as the potential for energy and industrial companies to be left stranded by rising carbon taxes — could increase the cost of risk at French banks by between a quarter and a third.

Villeroy repeated his call for the ECB, where he is a governing council member, to decarbonise the vast portfolio of corporate bonds and loans it has bought and accepted as collateral by shifting away from the heaviest polluters. He dismissed claims the potential move represented “mission creep” by the central bank.

For a transcript of the extended interview, see Moral Money at noon GMT on Wednesday 2 June

With additional reporting by Gillian Tett