Frenchman has faced calls to quit after two decades in charge

Arsène Wenger, the manager of Arsenal football club, has agreed a two-year contract to extend his 21-year stay at the London side, after a season where he faced sustained protests from some fans over his continued leadership.

On Tuesday, Arsenal’s board of directors rubber-stamped the decision made by Stan Kroenke, the US billionaire and the club’s majority owner, following a meeting with Mr Wenger earlier in the week, according to a person familiar with the talks. An announcement confirming the decision will be made on Wednesday, the person said.

The decision reasserts the status quo at the club where there had been growing uncertainty about the staying power of its senior executives.

Over this season, in which Arsenal failed to qualify for the Uefa Champions League for the first time in two decades, there had been protests by some supporters inside the club’s Emirates Stadium during matches, targeting both Mr Wenger and Mr Kroenke.

But fans appeared to be fully behind the team as it won the FA Cup on Saturday in a thrilling match against English Premier League champions Chelsea, a victory that Mr Wenger claimed as vindication against his critics in the media and the stands. 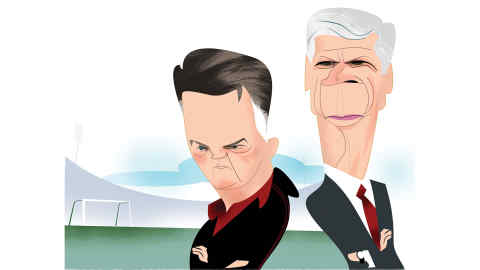 There has been speculation that other changes to the club’s structure are likely, such as the introduction of a director of football, above Mr Wenger, to take charge of some technical matters.

However, a person familiar with the club’s thinking said this was unlikely, adding that the Arsenal’s hierarchy had been given a singular mission for upcoming seasons: winning the Premier League.

Last week, Mr Kroenke was forced to rule out selling his controlling stake in Arsenal, after the Financial Times reported he had received an unsolicited offer from Uzbek-Russian billionaire Alisher Usmanov. In the past few weeks, Mr Usmanov, who owns about 30 per cent of the club, made a $1.3bn bid to acquire Mr Kroenke’s stake.

In a statement to the London Stock Exchange, KSE UK, the holding company for the US billionaire’s interest in the London club, restated its commitment to the English Premier League side, saying that his shares have “not, and never have been, for sale”.

Mr Kroenke, a sports mogul who also owns US franchises such as the Denver Nuggets in the NBA and Los Angeles Rams in the NFL, had already dismissed Mr Usmanov’s offer privately.