From heritage to healthcare, via regenerating the city centre, local business is ‘recognising its strengths’

Derby once saw itself as a Cinderella compared with neighbouring cities, says Liz Fothergill, chairman and largest shareholder of Pennine Healthcare. “Now in the last 20 years Derby is recognising its own strengths as a global manufacturer. There are lots of innovative companies, not just supply chains for big employers.”

Ms Fothergill was previously chief executive for 34 years and built the company, founded by her father, into one of the UK’s leading privately owned manufacturers of single use, sterile medical devices. She also chairs Derby Book Festival and Derby Museum and Art Gallery and has been High Sheriff of Derbyshire, as well as a government export champion and president of East Midlands Chamber of Commerce.

Pennine Heathcare employs about 300 and makes most of its products in the city. It exports more than half its sales, to more than 50 countries, demonstrating that it is possible to compete by manufacturing sophisticated but low-cost products in the UK.

“It’s not easy, but we are still competing with goods made in China and India,” says Ms Fothergill. Its progress was enabled by investment in automation, coupled with “understanding your customers’ demands and being able to offer shorter lead times”.

Pennine specialises in what she calls “medical hosepiping” — tubes for oxygen, feeding and removing waste fluids in operating theatres. It does contract manufacturing for larger companies and exports theatre procedure packs. It got in at the start of disposable medical plastics in the early 1970s.

She believes working in partnership with other companies — for example, ones with expertise in marketing — may be important in future for companies of Pennine’s size. She adds: “We are looking all the time at innovative new products.”

Ms Fothergill believes Derby has more to do to improve infrastructure and education, but adds: “It’s a great place to do business.”

Kevin Oakes, (pictured) chairman and owner of Royal Crown Derby, points to a fine bone china British bulldog paperweight, one of its popular products. “It’s about being proud to make in Britain, proud to employ people in Britain, proud to retain the history and heritage for generations to come,” he says.

Mr Oakes, who bought the porcelain manufacturer in 2016, says it has “turned a corner” after a programme of investment and is showing signs of growth in its 270th year. After years of lossmaking, he hopes it will be profitable within two years.

Established in 1750, Royal Crown Derby employs 115 at its historic factory in the city making fine bone china tableware and giftware. It has supplied every British monarch since George III, though now its main growth area lies in supplying luxury hotels and restaurants.

Mr Oakes, a ceramic industry veteran, was chief executive of Steelite, a Stoke-based tableware maker, when it took over Royal Crown Derby in 2013. On leaving Steelite three years later, he acquired Royal Crown Derby as part of the deal. His son Christopher is managing director.

“I wanted to make sure the last heritage brand stayed in this country,” says Kevin. Christopher adds: “I often refer to us as custodians, not owners. I plan to spend the next 20 years, maybe more, with this business.”

The company exports almost half its production and the pair are well aware that they fly the flag for Derby, since they carry the city’s name. “As someone who invested here I can say that the welcome we received was first class,” says Kevin.

They have invested in technology and new products, training and marketing. Christopher says: “I want to see it go from strength to strength and ultimately to ensure that the huge investment that my father has made pays dividends.”

Ruth and Gillian Hobbs, sisters from London, are excited to be part of a wave of regeneration that aims to transform the centre of Derby. The pair recently founded Urban Sister, a property developer specialising in converting unused and unloved city-centre buildings into luxury living accommodation for students.

“Massive hubs like Liverpool, Manchester, Birmingham and Nottingham are well into their lifecycle and it’s really hard to get property. But here we are at the beginning,” says Ruth.

They have purchased several properties in Derby and have already converted an empty office block into three co-living apartments, each with six en suite bedrooms. Now they plan to convert a grade II listed building above shops near to St James Securities’ planned £200m Becket Well development, a project to regenerate an area of the city with homes, offices and leisure space.

Ruth, who previously worked for marketing agencies, moved to Derbyshire to get married four years ago. For 20 years she had a buy-to-let portfolio in London, in which Gillian jointly invested, but Ruth calculated that the strategy needed to change.

Gillian, who works in the City and lives in Berkshire, plans to move close to Derby in the autumn. She says: “Ruth is passionate about the property and I’m passionate about the numbers.” Their children are also shareholders in the company. Gillian’s daughter will live in one of their flats when she begins studying at the University of Derby in September.

Among the sisters’ aims is to create serviced accommodation, which might be used by people hired by or visiting Derby’s big employers. They have their eyes on a Victorian building that has been empty for 40 years.

Gillian says: “It’s not just about making money for us, it’s about taking unloved buildings and helping to rebuild Derby high streets. We want to encourage other people to get involved.” 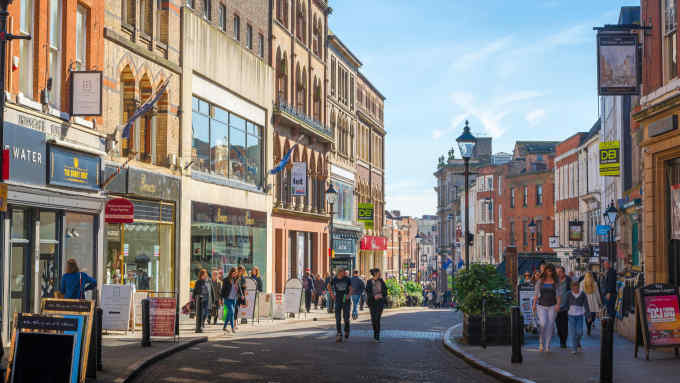