The ecstatic nihilism of the painter Alberto Burri

The return to the Venice Biennale of Alberto Burri’s flame-bright, black-burnt, brutally gorgeous paintings, in a major retrospective at the Cini Foundation on the island of San Giorgio, sends defiant messages across the lagoon and beyond.

A crumbling pumice stone white square with graffiti incisions, “Bianchi” (1949) resembles the remnant of an ancient wall. An expanse of torn, roughly stitched burlap beneath a sweep of radiant red, “Umbria Vera” (1952) evokes twilight over dry, lacerated earth. A molten plastic skin, swelling to bloody welts, pulls taut across punctured voids in the crater landscape “Rosso Plastica M3” (1961). At the end there is a surprise: a long wall of gold foil, “Oro” (1992), shimmers like a Byzantine mosaic.

These works overturn representation but are passionately evocative, and in a theoretical, politicised climate for art, Burri’s half-century obsession with matter is glorious. Any material he chooses — sackcloth or ashes, gold leaf or plastic — becomes sensuously engaging, and persuasive as an irreducible essence of painting. The Cini’s subtitle “La pittura, irriducibile presenza” draws attention to the paradox that by celebrating the raw physical presence of things, and their capacity for transformation by needle, blowtorch, scalpel, Burri conveyed postwar Europe’s abjection and disillusion. His art is ecstatic and nihilistic at the same time.

Painting mostly without paint, Burri was always subversive. The Venice Biennale of 1952 rejected him until Lucio Fontana intervened, and it was Fontana who bought there the first work Burri ever sold: “Studio per lo Strappo” (“Study for the Rip”). From then, Burri’s impact was rapid. In 1953 Robert Rauschenberg hastened to his studio in Rome, noted the metamorphosis of rags and sawdust into formal, elegant compositions — the humped “Gobbo Bianco” and the Pompidou’s vast patched sacking “Sacco e Bianco” are examples here from that frenzied year — and went home to begin his “Combines”.

That Rauschenberg was American and loud and Burri Italian and silent is one reason why Burri’s place in postwar art history was marginalised — something this show sets out to correct. Another cause was directly Burri’s fault: his uncompromising decision to secret away many of his best works, even winning them back from collectors such as Giovanni Agnelli. In Burri’s Renaissance Palazzo Albizzini in his native Città di Castello in Umbria the paintings live in a closed, Sleeping Beauty castle and are rarely lent.

An exception is this landmark exhibition, sourced in part from the Albizzini, along with loans from private holdings, the Pompidou and Rome’s Galleria Nazionale d’Arte Moderna, such as the monumental burlap and rope “Grande Sacco”.

Together, the selected works reveal a fresh, masterful, never-flagging Burri, with the Biennale offering a context to evaluate global influence, while the fabric of Venice and its Old Masters are eloquent backcloth to Burri’s very Italian interest in an art arising from ruins, and his unexpected ties to traditional iconography.

In the Albizzini’s “Rosso”, an irregular central red form, bruised by thick black lines, stretches like a torso with arms down and across the canvas in echo of a fragmented, abstracted Crucifixion. Scraps of white cloth on each side peel off like flayed skin; other collage patches suggest broken rocks, and there is a sense, across the aggressive, glue-bound surface, of cataclysm — the veil of the temple rent.

“Plastica Rosso Nero L.A.” pairs two charred, blistered plastic sheets, a black side rippling like the folds of baroque drapery, a fleshy red one with sooty holes, so textural that you think of Caravaggio’s “The Incredulity of St Thomas”, where the saint pokes his finger into Christ’s wound.

Any material he chooses becomes sensuously engaging, persuasive as an irreducible essence of painting

Born in 1915, Burri was a doctor before the war, a combat medic in Libya during it, and finally a prisoner in Texas, where he started painting. He denied links between the gaping wounds of his works and his medical experience; incontestable, though, is the connection between his scarred, scorched compositions and the war-ravaged wasteland of the Italy to which he returned in 1946, a place of economic and psychological collapse. Yet his violent processes redeemed it as beautiful, each work “perfect as form and as space” as he wanted. Burnt transparent plastic glistens like pools of water in “Plastica”; cracked acrovinyl on cellotex creates the lovely wandering labyrinth “Cretto G 3”.

For Arte Povera and, more widely, process artists, Burri’s metabolising of tar, sacking, charred wood, iron, plastic — examples of each series are included here — was foundational. Twenty-five years after his death, he remains, as Fabio Mauri called him, “king of the wretchedness that makes up the world”. 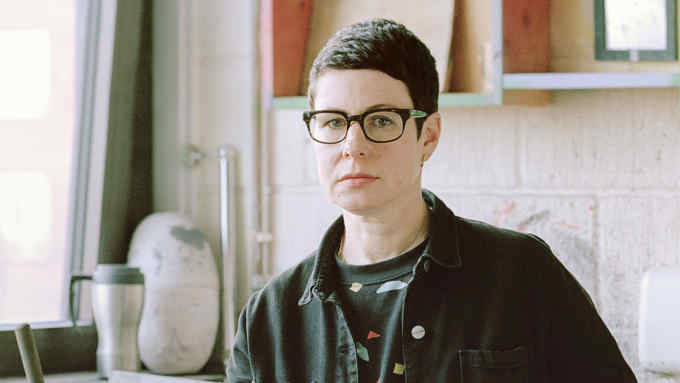