Jim Brunsden in Brussels and Mehreen Khan in Strasbourg

Michel Barnier has told EU politicians that he will prioritise nailing down the fundamentals of a new trade deal with Britain after Brexit and warned of the squeezed timetable to sort out the two sides’ broader future relationship.

The EU’s chief negotiator said that the 11 months from Britain’s planned EU exit on January 31 until the end of its transition period would normally be far too short to negotiate a trade agreement, but that Brussels would strive to have a deal in place for the end of 2020, according to people briefed on the closed-door meeting with MEPs in Strasbourg on Tuesday.

But he also said that the future-relationship talks would have to focus initially on core trading arrangements, such as plans for duty-free, quota-free trade in goods, that could be put in place without needing to wait for ratification by national parliaments throughout the EU.

He also told MEPs that ensuring continued strong co-operation with the UK on security and defence was another top priority for Brussels in the negotiations.

Other issues beyond the scope of the free trade agreement, such as concluding an agreement on road haulage and on aircraft take-off and landing rights, could take longer, Mr Barnier said, with the option for Brussels to take contingency measures to prevent economic disruption if talks were to continue past the end of 2020.

The plans underline the mammoth challenge facing EU and UK negotiators in the event that Boris Johnson wins the British general election and Brexit takes place as planned. 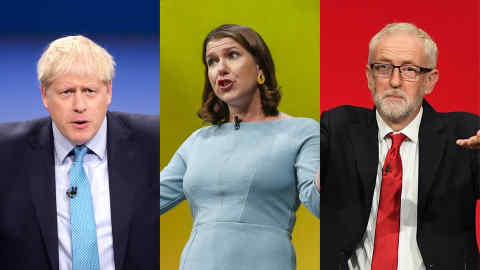 Mr Johnson and the EU have agreed a 27-page political declaration covering future co-operation on everything from trade to fighting terrorism, but the repeated delays to Britain’s departure mean that the post-Brexit transition period negotiated by Theresa May has been whittled away.

Mr Johnson has said he will not use an option, agreed as part of Britain’s Brexit deal, to extend the transition period by up to two years.

Mr Barnier told MEPs that a crunch issue in the talks would be the need for Britain to stick closely to EU social and environmental standards in exchange for getting the kind of market access that Mr Johnson wants.

If the UK does leave on January 31, Brussels plans to present national governments with a draft mandate for trade talks in February, in the hope that it could be approved in time for negotiations with Britain to begin on March 1.