It might seem unlikely that a series of 50 chairs by Gaetano Pesce would sell out in a day at Design Miami/, the high-end fair that accompanies Art Basel this week. The Italian designer, now 79, though highly respected by curators and collectors, is no household name. But get Raf Simons, the Belgian fashion designer and creative director of Calvin Klein, to add original American quilts to the chairs, et voila! All of Pesce’s Feltri chairs — designed in 1986 and made by dipping the completed all-felt object into resin — were snapped up on Monday’s preview day. Each a one-off, they are priced from €8,000-€10,000.

Elsewhere, Design Miami/ is the usual mix of snappy contemporary creations and highly-priced artefacts which broke new ground 100 years ago. Pieces like Takashi Kuwata’s vase at Pierre Marie Giraud, which looks as thought it’s covered in blobs of bubblegum in an almost Paul MacCarthy-ish way, brush up against the dull Danish furniture at Dansk Møbelkunst. And though the booths of chic 20th-century French and Italian pieces remain a feature (and by all accounts, are selling at very high prices), they feel less essential to the fair — the more idiosyncratic pieces on display are simply more interesting.

In the contemporary camp are shiny new desks and partitions by the Italian duo Formafantasma. They are assembled from unused computer parts — the keyboard armature of a laptop making up part of a leg, for example — spinning a narrative about the tools of our working world. Piovenefabi, another Italian pairing, at Maniera, raided the design vocabulary of the Milanese metro to make a coat cupboard in the same powder-coated metal sheet that panels station walls and makes up its signage (€8,000).

Meanwhile, Japanese designer Nendo developed a series of 18 white tables, consoles and chairs for New York’s Friedman Benda gallery in paper thin steel, decorated with sponged blue watercolour (from $18,000-$28,000). In photographs, without a sense of their scale, they look like weightless paper models — or furniture drawn in the air.

Régis Mathieu’s booth has a striking display of early 20th-century metal chandeliers, including a 1905 brass example at nearly three metres high. At Galerie Mitterrand, a three metre high bed head is a spectacular sight — a riot of art nouveau leaves and scampering monkeys that could have escaped from Henri Rousseau’s jungle. It was commissioned from the French decorative artist Claude Lalanne in 1997 for a Parisian apartment by a client who had originally requested a scene with birds. At €1.5m, it is the most expensive piece on sale in the fair.

Simons isn’t the only celebrity to have a presence at Design Miami/. There is also a soft-toy furniture family of endangered animals at the South African gallery Southern Guild made in collaboration with the Leonardo DiCaprio Foundation, dedicated to fighting climate change. The creatures are so huge that visitors to the fair collapse on them and curl up like children. Designed by artist-activist Porky Hefer and made by local craftswomen in South Africa (with whom the gallery already works), they are stuffed with recycled plastic and covered in recycled or discarded textiles or hand-carded wool. They are priced at $75,000-$125,000 each.

Explore the series
READ MORE
Bacon-Giacometti at the Fondation Beyeler: a pairing of modernist giants 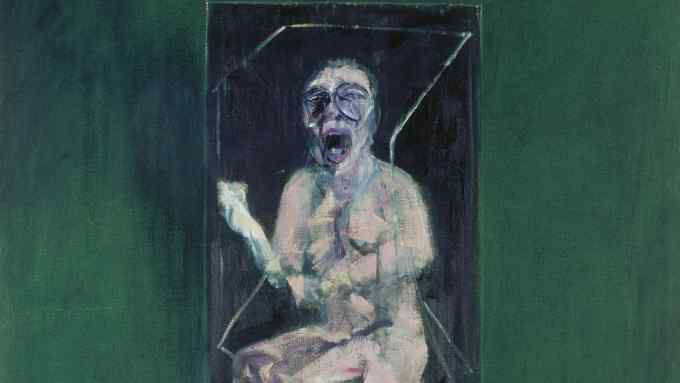