A fixed abode: How US retirees are helping Cambodia’s poor

Habitat for Humanity has repaired and built houses for more than 70,000 households in the country

Hang Kan recalls the first time she helped her father build a house. She stood on the sandy earth while he perched on the rafters, passing him the long palm fronds that were to be their roof and walls. Since she was a girl, Hang has lived in houses made from leaf and timber, first with her parents, then with Chung Chea, her husband.

Hang’s latest house took her and her husband a month to build. Now, the 38-year-old, who lives near the city of Siem Reap in Cambodia, says she is more than happy to take it down over a weekend.

When I meet her and Chung on a Monday in October, the old house is laid out on the earth in its constituent parts: long thin logs, dried palm fronds and a dozen or so wooden planks. The pair are happy to see it dismantled because it is about to be replaced by a team of US volunteers with Habitat for Humanity, an international housing charity that has repaired and built houses and sanitation facilities for more than 70,000 households in the 15 years it has been operating in Cambodia.

Hang’s old home is one of 2m houses in a country of 16m people that fail to meet the government’s minimum building standards — though no building code is enforced here. In this tropical climate, which cools only to 22C in winter, people need protection from the annual monsoon. But a house made of palm leaves will not keep the rain out.

Habitat chose to help Hang and the family who live next door, not only because they lack secure housing but also because they live in poverty. Their homes are surrounded by green fields and the family owns the land on which they are built, but they do not own enough to live off. Much of the farmland in this area has been sold to people from Siem Reap. Speculators often buy land from local families, hoping to sell it on at a higher price.

Chung earns about $5 a day, working as a manual labourer to support his family of four children. They are among the 8m Cambodians who live on less than $2.30 a day per person, according to the World Bank.

On the first day of building, the Cambodian families gather with 22 US volunteers — nearly all of whom are retired — under a white marquee set up by Habitat in front of the plots where their houses once stood. Yot Sat, the 47-year-old mother of the second family, wears a smart sleeveless shirt patterned with purple and blue. Pik Puch, her son, is dressed in the orange robes of a monk. Yot sent Pik to train at a local monastery, a common way for poor families to ensure their children receive education and meals.

Chea Bunseng, a Cambodian Habitat employee in his early thirties known to the group as Eric, introduces everyone. As volunteer engagement officer he performs many roles: building site manager, interpreter, tour guide and jester. He encourages both sides to speak, and the Americans relay their feelings with gusto, talking about their “excitement”, “joy” and “full hearts”. The smiling local families tend to repeat: “We are so happy.”

“Thank you for allowing us the privilege of helping you,” says John Waite, a 69-year-old retired facilities manager and group team leader. It is his fifth Habitat build, and some volunteers are here because they know him from previous trips. He brought them together through personal invitations and partly through an open application process. The result, Habitat hopes, will be a team that works well together.

After introductions, the volunteers scuttle off in search of tasks. Some carve knots out of the bamboo slats that will become floorboards; some saw dense beams of wood that will form posts and rafters. Three skilled local workers per house take care of more complex tasks.

The end product will be a simple wooden house on stilts, without plumbing or electricity. All it requires is labour, co-ordination and patience from the team working under harsh sun.

We get so much out of it: learning new skills and helping others. Building something that lasts

Each morning as the volunteers arrive and settle into their work, conversation falls away to a cacophony of hammering, drilling and sawing. Many work in pairs with a “build buddy”, their tools beating out rhythms in time. “You really want to finish that off; you want the glory,” says one volunteer, encouraging another who is about to saw through a tough beam of wood. Everyone in the group knows someone else. Some come with spouses and siblings; some have persuaded their friends to try out a build. Those returning — roughly half — talk fondly about the first person to get them hooked.

The volunteers have paid about $1,850 each to Habitat for the privilege of doing unskilled manual labour in 30C heat. Many Cambodians would marvel at this.

Habitat has recently tried to engage locals in volunteering, and younger Cambodians are becoming more aware of the concept. But for most adults, providing for their own families is more pressing than helping strangers. “It’s 60 per cent for ourselves,” says Jeri Jannicelli, a repeat Habitat volunteer from New York. “We get so much out of it: learning new skills and finding out that yes, I can shovel cement. Helping others. Building something that lasts.”

Kristin Fabos, marketing director of a Californian community college, says: “My husband and I want to travel through the developing countries of Asia, but we also like to be able to give something back.” Anna Mathai, a recent retiree from Oakland, adds: “In the US, where your identity is so tied up with your work, we have to ask, what does it mean to be retired?”

What the volunteers are looking for is a meaningful mission and a sense of being useful. Habitat was founded as an ecumenical Christian organisation in the 1970s. Today the organisation turns its volunteers’ need for purpose into activity. It does not expect its beneficiaries and its staff to be Christian.

The emphasis is on collective contribution. “The least fulfilling builds are those when there are too many people on a project and not enough jobs to go around,” says Evangelia Papamarkou, who has worked on more than a dozen projects with Habitat around New Jersey. At the construction site, Habitat staff must make sure there is a constant supply of tasks, to answer the regular cries of “Anything I can help with?”

The volunteers say they have common cause with the families they are helping. They may be visitors from the world’s richest nation to one of the poorest, but many have also seen the effects of the housing crisis and homelessness in their own neighbourhoods.

Some joined Habitat’s rebuilding of homes in New Jersey hit by Hurricane Sandy in 2012. Many of them live in cities where housing has become unaffordable for many. They all agree with Habitat’s premise: high-quality housing is the basis of a good society.

As we watch the children colouring in the cartoons that Fabos has bought for them, Eric remarks that he does not know if they will finish lower secondary school, usually completed at the age of 15 — more than half of Cambodian children do not. “But I think the family is more likely to get them through school now. When you have a house that feels stable you free your mind up to think further ahead.”

Chung used to worry about the old house when he was out working, “always thinking of ways to earn more money to improve it”.

Although he and the local families work alongside the Habitat volunteers and they gradually grow less shy of one another, there is still a gulf. At lunchtimes the American volunteers eat packaged lunches, while the local skilled workers, Habitat team and local families share fragrant fish stews, the two sides divided by language and culinary tastes. They come together best when Eric hosts a game. In another Habitat build nearby, the teams use “spin the bottle” to ask one another questions. The local family will only answer, declining to quiz their foreign guests out of politeness.

Nearly all the Americans are visiting Cambodia for the first time. Eric likes to take foreign volunteers on a trip to Siem Reap at the end of a day’s work. After the penultimate day of building, we visit the Cambodia Mine Action Centre, a community group working to remove mines. “Sorry to talk about your country,” the guide repeatedly apologises, describing how his team has carefully removed more than 2m mines that were left during the Vietnam and civil wars by forces including the US. “But this is truth.”

For Eric, these visits are just as important as the building work. He rejects the argument that Habitat would build more effectively if volunteers simply donated money and it hired local skilled workers instead. He argues that by visiting the country, western donor-volunteers form a much deeper connection with the cause, and the charity raises much more money than it would otherwise do. “We want to show visitors Cambodia and its culture,” he says.

The organisation also provides employment by hiring local labourers to build and repair houses, sometimes even without volunteers, and to oversee the builds. But the low-skilled nature of the work means that the volunteers speed up the process.

Waite is similarly sceptical about a Habitat without volunteer-tourism: “The only way that Habitat survives is by giving people a good experience that makes them want to tell more people about it.”

Back at the building site, by Friday morning, the zinc roof is on the house and work has slowed to a few volunteers painting the outside a pastel green. At a handover ceremony, Eric sits everyone down again under the marquee to express their gratitude to one another. Jannicelli says of these handovers that she often wants to skip the talking.

“I feel very embarrassed when I am thanked. I think I have so much, that really, we don’t need a pat on the back,” she says.

Eric then hands out bottles of talcum powder. Following a Cambodian tradition, he instructs each person to take a handful and smear it across the cheeks and chin of their target, in a symbol of cleansing. Some happily submit while others run away, especially the children, so it ends up like a game of tag. The orderly construction site turns into a riot of children and adults running after each other, raising clouds of white powder — the first time the Cambodians and Americans touch one another.

Your gift will be doubled

If you donate to Habitat for Humanity through the FT’s Seasonal Appeal, the Hilti Foundation, a charitable organisation, has generously agreed to match your gift. 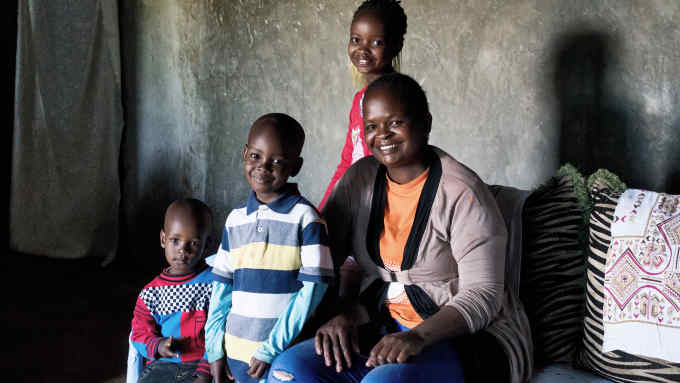