Restaurant Group says some sites will not reopen this year

We’ll send you a myFT Daily Digest email rounding up the latest The Restaurant Group PLC news every morning.

The owner of a number of UK high street restaurant chains has warned that a tenth of its sites will not reopen this year in the wake of the pandemic.

The Restaurant Group, which owns chains like Wagamama and Frankie and Benny’s, said on Friday that it expected a quarter of sites to be open by the end of July, but those in places such as airports where customer numbers were “anticipated to remain considerably weak” would remain closed.

The FTSE-listed company also revealed that it had received a £50m coronavirus support loan from the government through Lloyds bank.

The board, which had taken a 40 per cent pay cut early in the crisis, has agreed to continue with a 20 per cent cut until all staff are taken off the government’s furlough scheme, which could last until October.

Restaurants in England were allowed to reopen from last weekend but trading is down and social distancing measures have cut capacity by as much as half in some.

Compared with the same weekend last year, trade across hospitality businesses was down by as much as 45 per cent on the weekend of July 4, according to the Coffer Peach Business Tracker, which monitors the industry.

Just over 40 per cent of pubs and bars reopened but only 12 per cent of restaurants, it said. 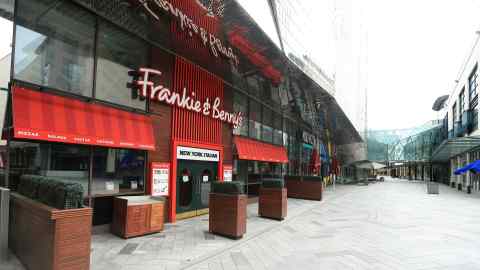 “Trading at around 55 per cent of pre-covid norms may seem a disappointing result, and it won’t be profitable for operators, but it is very much in line with what we have seen in other markets,” said Karl Chessell, director of CGA, which produces the tracker.

Faced with the costs of reopening and restarting supply chains after three months without revenues, several chains have been negotiating rescue deals with buyers this week.

Byron, the burger chain, is in talks with three prospective bidders, while Azzurri Group, which owns the ASK and Zizzi brands, is close to agreeing a deal with private equity firm TowerBrook. Prezzo also started a sale process this week.

The Restaurant Group, which went through a CVA restructuring process in June to allow it to close 125 sites, has already put its Chiquito and Food+Fuel brands into administration, resulting in the closure of a further 70 restaurants. About 3,000 jobs are at risk and its estate will be reduced from more than 600 sites to around 400.

Video: Is it time to go back to the neighbourhood restaurant?