US cities rethink the role of police in schools

Some US cities are moving to cut ties between schools and the police, as antiracism protests prompt a reconsideration of the role of law enforcement.

Civil rights advocates have long argued that putting police in school hallways has made students — especially minorities — feel less safe. Now, as demonstrators across the US call to divert policing resources into more community-focused programmes, some cities are taking action.

Since a Minneapolis police officer killed George Floyd late last month, the city’s school board has voted to end its $1.1m contract with the police department, which had placed school resource officers (SROs) — sworn law enforcement personnel — in middle and high school hallways.

First implemented in the 1950s, the use of school resource officers has steadily grown across the US, with calls to increase their numbers further amplified after each new school shooting. After the 2018 school shooting in Parkland, Florida, the Trump administration used a decades-old federal police grant programme to prioritise SRO funding.

According to the National Association of School Resource Officers, 42 per cent of public schools have at least one SRO.

Advocates for police in schools argue SROs are necessary to prevent crimes in school while fostering positive relationships between students and local police. But civil rights advocates say it has a disparate impact on black students and perpetuates a “school to prison pipeline”.

To me, school felt like prison. Even our windows were barred up . . . It makes [us] feel like we’re just bad kids, and maybe we do deserve this

A 2016 report from the Department of Education found that black students are 2.2 times more likely to be referred to law enforcement for school-related disciplinary action than their white peers — even though white students vastly outnumber black students. Studies suggest racial disparities in school discipline have a cascading effect that can lead to students dropping out of school or facing juvenile detention.

Maya Wiley, a professor at the New School and former counsel to New York mayor Bill de Blasio, said the criminalisation of student behaviour “creates a school environment like the penal system”.

For instance, metal detectors, bag searches and pat-downs have been widely utilised in New York schools, which some students say has a negative impact on their education.

Andrea Colon, a 19-year-old college student and youth organiser with the Rockaway Youth Task Force, had to walk through a metal detector to get to class every day when she was attending a predominantly black and Hispanic public high school in New York.

“To me, school felt like prison. Even our windows were barred up,” she said. “If you would go outside on the field or gym you’d still have to go [through] metal detectors . . . It makes [us] feel like we’re just bad kids, and maybe we do deserve this.”

Students, activists and courts have cited cases of police using excessive force in schools, pushing teenagers against lockers or using pepper spray in response to minor issues. Recalling a fight that broke out at her high school, Ms Colon said she witnessed an SRO choking a student as a teacher “choke slammed” another to the ground.

Stacey Davis Gates, Chicago Teachers Union vice-president, said that one of the issues with SROs was the mismatch between students’ needs and police capabilities.

To her, policing is a “Band-Aid” over systemic issues of inequality, such as poverty and housing insecurity. “Police officers are not counsellors. They’re not clinicians. Police officers have guns and handcuffs, and the one thing that they can do in our school communities is arrest students.”

As antiracism demonstrators call for police defunding, the debate over school policing has focused on how money spent on SROs could be invested in other school services.

The New York Police Department’s budget for school safety exceeds $300m a year. Chicago public schools have a $33m contract with the Chicago Police Department, and the Los Angeles Unified School District spends $70m to maintain its own police department.

Educators in Seattle and Minneapolis have said that funds for school policing should instead be spent on staff supporting students’ mental health and education, including guidance counsellors, social workers and student family advocates. 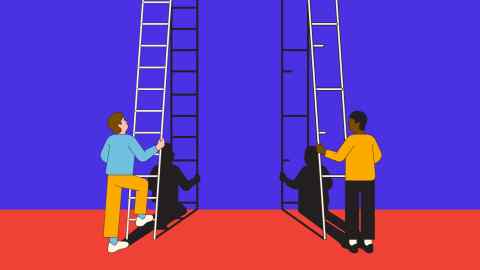 A group of Chicago students have called on the city to invest in social workers, speech pathologists and other resources to address the “root causes of readily visible problems”.

Similarly, Mo Canady, executive director of the National Association of School Resource Officers, said the organisation supported reforming, not eliminating, the use of SROs. “Well-implemented programmes can help communities bridge the gap between law enforcement and youth, building positive relationships that can last lifetimes, while helping to protect schools from a wide variety of threats,” he said.

Ms Colon said she wondered what her high school would have looked like if the money spent on school policing was instead invested in counsellors, social workers or teachers.

“There was one year I wanted to take chemistry and the class just did not exist . . . and I had to fight to get that class,” she said. “That shouldn’t have to happen.”