Elliott and Veritas team up to buy Athenahealth for $5.7bn

Elliott, which owns about 9 per cent of Athenahealth, will hold a minority stake via its Evergreen Coast Capital private equity arm.

For Veritas, which has some $10bn of assets under management, the buyout will be among the largest ever completed by the New York-based group.

The private equity fund has made a string of acquisitions over the past several years, including the purchase of a GE Healthcare unit in July for just under $1.1bn, which it intends to combine with its new acquisition.

Jeff Immelt, the former chairman and chief executive of General Electric who joined Athenahealth as chairman in February, said the “agreement with Veritas . . . maximises value for our shareholders and accelerates our goal to transform healthcare.” The $5.7bn price tag is based on Athenahealth’s fully diluted share count.

The deal comes five months after Jonathan Bush, a co-founder of the company, resigned as chief executive after damaging revelations surrounding his personal life.

Mr Bush had been embroiled in a bitter tussle with Elliot, which was trying to boot him out of his role, arguing he was mismanaging the company. 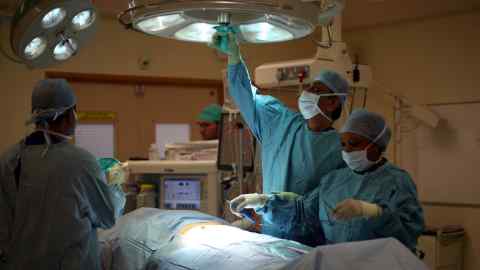 Elliott approached Athenahealth with a $160-per-share takeover offer in May, a year after taking a stake in the company, but talks fizzled as the company’s shares proved volatile. The stock rose as high as $164 in the wake of the Elliott offer in May but it closed at $120.35 on Friday, taking its decline for the year to nearly 10 per cent.

The activist fund lambasted the board for “fail[ing] to correct a host of identifiable operational issues”. It said Athenahealth, which was one of the biggest winners from rules introduced under the Obama administration that required doctors to move their paper files over to computerised systems, was doomed to underperformance as a public company.

Elliott is run by Paul Singer, the activist investor whose decade-long battle over defaulted bonds issued by the government of Argentina at one point involved detaining one of the country’s navy ships while it was docked in a Ghanaian port.

Get alerts on athenahealth Inc when a new story is published