Jeremy Corbyn has confounded his critics by increasing the Labour party’s share of the House of Commons after the UK’s general election.

With all the results declared, Labour had made a net gain of 30 seats, taking its total from 232 to 262. “I am gobsmacked, everyone is,” said one senior party figure.

After the election ended in a hung parliament, Mr Corbyn urged Theresa May to step down as prime minister, saying that she had called the election to win a mandate. “Well the mandate she’s got is lost Conservative seats, lost votes, lost support and lost confidence. I would have thought that is enough for her to go, actually,” he said.

The public had had enough of “austerity politics” and wanted an end to cuts in public expenditure, he said.

The party is unlikely to be able to piece together a “progressive alliance” with smaller centre-left parties to form a government. However, the result marks a big improvement on that achieved by Ed Miliband in 2015, both in terms of seats and vote share.

The slew of Labour seat gains had been seen as virtually impossible five weeks ago, when the party was 25 points behind the Tories in the polls. It came after a successful election campaign which played to Mr Corbyn’s strengths.

Labour won back many votes on its anti-austerity platform while also securing big swings in London, Scotland and the south in what was seen as a backlash by Remain voters against Brexit.

Seats taken from the Tories included Vale of Clwyd in Wales, Battersea in south London, Peterborough, and Warwick and Leamington.

In Scotland, the party won back Kirkcaldy and Cowdenbeath, the former seat of Gordon Brown, as well as Glasgow North East. It also performed strongly in three other Glasgow seats.

Labour held off the Conservatives in marginal seats such as Wrexham and Darlington, which had looked vulnerable in the run-up to the election.

Live updates on the election results and talking points

In Putney, it slashed the majority of Tory cabinet minister Justine Greening from about 10,000 to 1,000. Labour also performed strongly in Hastings, the seat of home secretary Amber Rudd, forcing a recount.

John McDonnell, shadow chancellor, told the BBC that Mrs May had made a “catastrophic error” by calling the snap general election.

Mr Corbyn’s fan base was jubilant, seeing the results as vindication of their support for the leftwing leader. One of Mr Corbyn’s senior aides told the Financial Times it had been a “stunning turnround” for the party.

The result could help to heal the civil war in the Labour party, shutting down criticism from centrist MPs after two years of feuding.

Instead minds will be focused on the likelihood of another election within months. “If this is true, the job of Labour will be to unite,” said one moderate figure.

Senior moderate MPs are expected to return to the shadow cabinet, fortifying what has in recent months been a hand-to-mouth operation at the top of the Labour party. Those considered likely to accept frontbench jobs — if offered — could include Chuka Umunna, Rachel Reeves, Angela Eagle, Maria Eagle and Hilary Benn.

Tom Watson, deputy leader and a one-time critic of Mr Corbyn, insisted in the early hours that no MPs had been considering a leadership challenge. “I think he was safe whatever the result,” he said.

Labour narrowed the polls gap with the Tories after several stumbles by Mrs May, including her U-turn on social care.

UK general election
The Tories lost their majority. Now what? 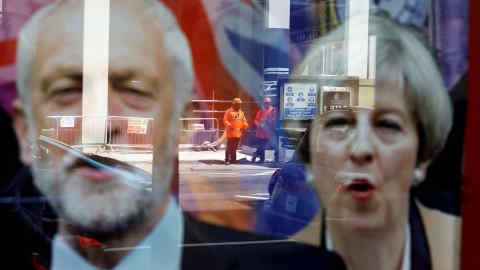 The Labour manifesto promised to shower almost everyone in Britain with money, by ending tuition fees, ringfencing pensioner benefits, spending more on welfare, increasing the living wage and raising funding for social care, the National Health Service and education.

The plans would involve an extra £49bn a year of taxes, falling almost entirely on business and high earners.

That promise of higher spending also seems to have lured a large share of UK Independence party voters back from the anti-EU party.

Mr Corbyn could try to enter talks with smaller parties, including the Scottish National party, to provide support for a minority government. He has ruled out any formal “deals”, making a formal coalition or “confidence and supply” agreement unlikely.

Even then, however, the mathematics are difficult for the Labour party given that the SNP has lost seats.

A “progressive coalition” of Labour, the SNP and the Liberal Democrats would be unable to reach the threshold of 326 seats, even with one Green MP and three from Plaid Cymru.

Mr Corbyn won the Labour leadership two years ago in the teeth of bitter hostility from most of his own MPs, who saw him as a “hard-left” throwback.

Many had predicted that he would lead the party into an electoral disaster, not least because of his past association with groups including the IRA, Hamas and Hizbollah. He faced a wave of aggressively negative front-page articles from the Tory press in the closing stages of the campaign.

Many of his own MPs have opposed his “spendthrift” approach to public finances, believing that his manifesto, involving an extra £250bn of borrowing, would be fiscally irresponsible.

Mr Corbyn appears to have pulled a positive result out of the bag, even if it does not leave him sitting in Downing Street. Sunny Hundal, a Labour commentator, said: “Corbyn has won the ideological argument within the Labour party.”

Get alerts on Jeremy Corbyn when a new story is published