Laura Noonan in New York and David Crow in London

JPMorgan Chase has sent new EU employment contracts to more than 200 London-based staff in recent days while Royal Bank of Scotland is gearing up to begin serving clients at its new Dutch entity, as banks intensify preparations for a “hard Brexit”.

Senior executives at several large international banks said that while a postponement of the UK’s March 29 departure from the EU would be helpful at the margins, they were powering ahead with final preparations to be ready to cope with any eventuality.

In JPMorgan’s case, those preparations involved sending new employment contracts to between 200 and 300 staff in the past few days informing them that their employment will switch to new EU entities if a “hard Brexit” occurs, two people familiar with the situation said.

Affected employees already knew they were on the list to move from London to EU hubs including Frankfurt and Paris, the people said, adding that the bank has undertaken to support them with housing and travel on a temporary basis. A spokesman for JPMorgan declined to comment on its planning. 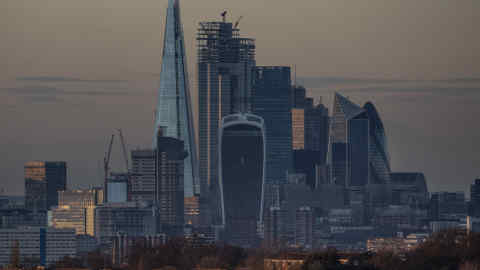 NatWest Markets, the investment banking subsidiary of Britain’s RBS, will have about 250 people working for it across Europe, including between 100 to 150 people based in its new Amsterdam hub, and is transferring around 100 people from London to the EU, a spokesperson said. The new entity began transacting with some EEA clients on Monday.

Other banks including Bank of America, Morgan Stanley, Goldman Sachs and Citigroup have already moved between 50 and 250 “day zero” staff to eurozone locations in preparation for the original March 29 Brexit date, after which UK-based banks may not legally be able to serve EU clients.

“Clients are being rebooked [to our EU entity] as we speak,” said an executive at one of the big US banks. “The people who are moving have moved . . . We’re looking at it in a very cold-eye kind of way.”

A senior executive at another bank said they had no choice but to be “very proactive” and get everything in place for March 29.

A report by consultancy EY last week said that financial services have committed to move some £1tn of assets and about 7,000 jobs out of the UK in their first wave of Brexit moves.

Senior finance executives have warned that the initial moves could be the tip of the iceberg if the UK cannot forge mutual recognition regulatory agreements with peers in the EU that allow relatively free access between their financial markets.