London’s Chelsea Barracks: a new parade ground for the public

In September 2009, as global leaders battled the financial crisis, two architects held a quiet meeting of minds in London’s Chelsea Physic Garden, a haven of herbs and fruits near the river Thames.

In the 350-year-old green space, the prolific London architect Michael Squire and eminent landscape architect Kim Wilkie conceived a new development that would, in effect, be designed backwards. “We decided that we would have object spaces and then put our buildings around them,” says Squire.

The 13 prime acres for which they planned, close to the Physic Garden, were hotly contested. Only three months earlier, the Prince of Wales had written to the Qatari royal family urging a change of plan at Chelsea Barracks, where a Richard Rogers-designed scheme for a series of copper, glass and concrete residential buildings prompted local disgust.

The prince succeeded in persuading the developers, Qatari Diar — a division of the country’s sovereign wealth fund — to scrap the design; the episode left the Qatari funders bruised and in dispute with their then joint venture partners, the Candy brothers. Yet already, Squire and Wilkie were hatching another proposal for the site, including five acres of outdoor space, which went out of its way to plant roots in Chelsea history and in the Thames-side soil.

“London is such a comfortable city because the green space permeates so much of the built space,” says Wilkie. “The ground here [in Chelsea] is so fantastic, it’s these deep alluvial soils beside the river . . . you get the cool wind blowing up the river, and so it’s always been a great place for growing things.”

This month I visited the site where their plans are under construction — a patch of prime land barred to the public for the past century and a half, where hundreds of labourers are now constructing one of the capital’s most expensive residential developments. The scheme is expected to be worth about £3bn when completed, although the developers will not commit to a finish date. At its peak the construction will involve at least 1,600 workers.

At the north-west corner, the first phase of apartments has reached its full height of eight storeys. Around it, cavernous digs are creating underground spaces which will hold spas, parking spaces and other amenities for the development’s well-heeled residents.

The area’s history is hard to avoid. The builders’ task began with demolishing asbestos-tainted 1960s barracks buildings, which appear in vintage photographs around a bleak concrete parade ground. In deference to local campaigners, the developers have preserved the barracks’ Victorian garrison chapel, which will become an art exhibition space.

Neighbours raised concerns that the construction work would send the Westbourne, a long-buried river, bubbling into their gardens and foundations. The developers assured them that the watercourse had been rerouted in the 19th century into a sewer beneath Chelsea Bridge Road. Archaeologists are now working on the site after seizing the chance to trace the former course of the lost Thames tributary.

The development will be underpinned by a 13-metre-deep “secant”, or retaining wall, to keep the ever-present water table out of the basements. Yet the site’s watery past will not be forgotten: above ground, water features by Neil Porter, including a brook beside a path set back from Chelsea Bridge Road, will echo the underground streams. 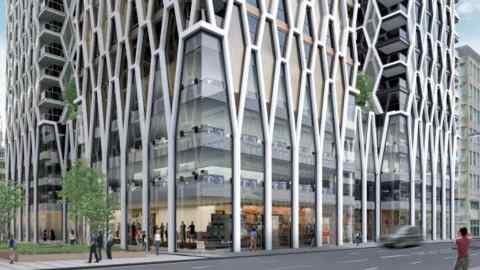 Meanwhile, a series of garden squares are taking shape. Perhaps learning from their predecessor’s misfortune, Wilkie and Squire have sought to blend their development closely with the local surroundings; it incorporates streets that link seamlessly into the existing roads, and its squares and apartment blocks refer to the older architecture of Chelsea and Belgravia. Squire says he was aiming to create “rather than a housing estate, another piece of the city”.

Squire also took inspiration from the Grosvenor Estate, which developed swaths of Mayfair, beginning in the 1720s, around a series of grand squares. Grosvenor acted as master planner, often contracting out construction of the buildings. “Over the centuries, it’s the spaces that survive, even though the buildings may change,” says Wilkie.

The choice of Squire to create the site’s master plan, following the Prince Charles debacle, was unsurprising: he has a history of self-effacing developments, once describing his own designs as “polite”. His buildings, dotted across London, include The Knightsbridge, an upmarket apartment block off Hyde Park, and the headquarters of the fashion chain Reiss close to Oxford Street.

At Chelsea Barracks, Squire is also working with the architecture practice Dixon Jones. Squire has outlined five new garden squares plus Garrison Square, a pedestrian square lined with shops and restaurants. At the centre of the scheme is a 100-metre-long vegetable garden, the centrepiece of Wilkie’s vision that the site must be “productive as well as beautiful”. It will incorporate walnut trees and an apple orchard.

Estate agents, the duo say, were initially sceptical about selling multi-million-pound homes “surrounding a vegetable garden”, but were brought round by references to great gardens such as the ornamental kitchen garden at Château de Villandry in north-west France, which dates from the 16th century.

The first of six phases, in which 68 apartments are already taking shape, was designed by Squire himself, with his trademark Portland stone cladding. The buildings are quietly angular but echo nearby streets in their structure of six storeys with a further two set back from the parapet. While they are constructed using 21st-century techniques, their proportions mimic the modest dimensions of a time before the development of high-strength steel.

A second phase, consisting of 13 townhouses, has been designed by architects Paul Davis & Partners. Across the scheme, a total of 448 homes is due to include 123 low-cost units, all of which are in the final phase. From within the development, residents will be able to glimpse St Barnabas’ Church and the Christopher Wren quadrangles of the Royal Hospital Chelsea.

All but one of the open spaces will be accessible to the public, although the development’s extensive underground real estate will be for residents; where homeowners elsewhere in Chelsea have maddened their neighbours by digging out “mega basements”, the townhouses on this site will be built with these already in place. The basement of each townhouse has been designed to incorporate an eight-person cinema and a pool up to 12 metres long, although buyers can also customise the plans.

In a warehouse in west London, the designers are using off-site prototypes to test the homes’ design features, anxious that the wealthy residents-to-be should find no detail at fault. Scale models of large sections of an apartment and townhouse are being used to refine lighting design and stonework, test materials and train workers.

The developers say they will complete the first three phases in 2018; a fourth phase, designed by Eric Parry — who restored St Martin-in-the-Fields, the church in Trafalgar Square — will sit at the centre, consisting of residential blocks set around a private courtyard. Qatari Diar is in talks with Westminster council about planning permission for the final phase, but is reluctant to commit to a completion date.

It is marketing the development’s ultra-prime homes at a challenging time: average prices for high-end new-build houses and apartments in London have been on a downward trend for two years, while the vote to leave the EU has cast a further cloud over the market.

People close to the development say that just under half of the 68 apartments in the first phase have been sold, at prices of about £4,500 per sq ft, placing it among the capital’s most expensive real estate.

“We are sticking with this for the long term, and we are determined to deliver it out as soon as possible,” says Jerry Holmes, chief development officer at Qatari Diar UK. “It is our biggest and most important investment within Qatari Diar worldwide, as well as in this region.” That is a big statement: Qatari Diar’s development projects range from Washington DC to Dushanbe in Tajikistan and are worth more than £26bn, the group says; a portfolio of major London holdings includes the 95-storey Shard skyscraper. 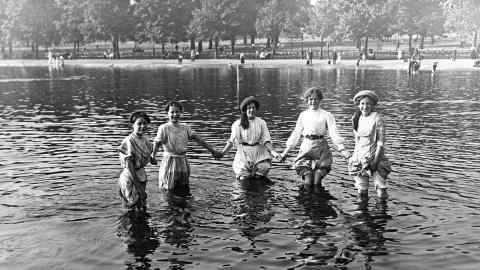 After a series of consultations, the developers have won some local hearts — one resident, Margaret Thompson, describes the planned squares as “absolutely delightful” and welcomed the fact that the site would not be gated — but others are still unconvinced.

“Even Gotham City would have been an improvement on the last attempt, but it is still a lost opportunity,” says Georgine Thorburn, who led the campaign against the earlier design. “The squares are long, skinny bits of green and the houses are more like palaces.” She argues the buildings remain too tall for the “sympathetic nature of this conservation district”.

When the site is finally unveiled, it will be the first time for 150 years that the public has been able to enter. In its barracks days “you saw helicopters landing in it and people marching in it, but it didn’t really give anything to the street,” says Squire. Once the development is completed, he adds, “anybody in the world can come and play football in these gardens”.