Lead the way with 50% off
FTfm Exchange traded funds

Covid-19 has paralysed business activity across the globe, but the ETF industry appears to be made of sterner stuff. The pandemic has, so far at least, had a limited impact on the pace of listings of shiny new exchange traded funds.

A lively debate is afoot, however, as to whether the sector has delayed its day of reckoning or whether or not even the worst pandemic for a century can meaningfully disrupt the seemingly endless conveyor belt of new products dreamt up by the industry.

Some analysts argue the early signs of a slowdown are already apparent, as the repercussions of coronavirus ricochet across the industry. Others see signs of a rally in fresh ETF listings as asset managers get to grips with the new normal.

Ben Johnson, director of global ETF research at Morningstar, is among the pessimists, arguing that “firms are going to be reluctant to launch a new product in a market that has been as volatile as we have experienced this year”.

However, Deborah Fuhr, co-founder of ETFGI, a London-based consultancy, is more upbeat, saying that initially “people went into a rabbit hole and didn’t know what to do”, as they shied away from launching new ETFs.

But now they “are realising this is the new normal and they need to get on with their work. They are not going to [be able to] go out and do roadshows and meet in person and play golf. The use of webinars has increased and will continue to increase. The use of digital [channels] as a way to get information on products is increasing,” she says.

Ms Fuhr’s figures show 239 ETFs and exchange traded products were launched worldwide in the first four months of 2020. This was the lowest January-April tally since 2014, although not dramatically below previous years’ readings.

Anaelle Ubaldino, a quantitative financial adviser at Koris International, a French investment advisory firm, is in the pessimists camp, though.

Citing data from TrackInsight, the Financial Times’ ETF data partner, Ms Ubaldino says 228 products were launched in the first quarter of the year, well above the 198 in the same period last year, but launch activity was now drying up in some regions in a delayed reaction to the market turmoil unleashed by the virus.

Her data show that Asia-Pacific, the first region to be hit by the virus, was also the first to see the impact percolate through to the ETF industry. It started the year strongly, with 51 launches in January alone, but that number has fallen month-on-month ever since, dwindling to just 13 launches in May and seven in June.

Monthly figures for the Europe, Middle East and Africa region have been flatter, however, while those for the Americas have been more erratic.

As a result, global launches in the second quarter of the year were above those in the same period last year, but only by 198 to 186.

“The coronavirus crisis hit the world in January. ETF launches in the first quarter were not affected, and were slightly up in Apac, but we are now seeing the impact of the crisis,” says Ms Ubaldino. She attributes the delayed effect to the several months it takes to construct an ETF, get regulatory approval and arrange to list it on an exchange.

“If they are stopping the process now, the consequences of the crisis will show up in a few months,” she says.

One thing all agree on is that fund groups are upping the pace at which they close unsuccessful products.

Some acorns grow to mighty oaks, some die before they are saplings

Ms Fuhr attributes the cull to the high levels of concentration in the industry. With just 740 of the 8,022 existing ETFs having assets of $1bn, there are a lot of undersized vehicles vulnerable to the axe, particularly at a time when many fund management groups are cutting costs.

Mr Johnson also cites idiosyncratic factors behind some of the closures, such as Invesco trimming its range after recent acquisitions and the implosion of leveraged oil products after futures prices briefly turned negative in April. According to Ms Fuhr, 30 of the terminated products were leveraged and a further 14 were leveraged inverse.

However, Mr Johnson says that a high rate of closures is a facet of any maturing industry. “It’s not unique to ETFs or asset management products more broadly; it’s something that takes place everywhere in business and further afield in nature,” he says.

“Some acorns grow to mighty oaks, some die before they are saplings. [Asset managers] throw a lot at the wall and see what sticks. A lot of the increasingly niche or esoteric ETFs fail to catch on.”

The composition of the ETFs that have launched this year also tells a story. According to TrackInsight’s data, 36 per cent of listings in the Emea region have been ESG funds, focused on promoting environmental, social and governance issues, a further 19 per cent have been thematic and 4 per cent factor funds. Just 41 per cent offered the kind of broad market coverage ETFs have traditionally provided.

In part, this may be a reflection of the fact that the big, obvious stock markets are already well covered. The ongoing rise of ESG, though, particularly in Europe, may have been accelerated by the pandemic, Ms Ubaldino, argues, with well-governed companies perceived by some as more likely to survive.

“In the coronavirus crisis a lot of businesses might suffer from the stop in the global economy. ESG is not just about the environment, it’s social and governance with respect to cash flows,” she says. “It might be that those ESG funds are going to see a lot more traction.”

FTfm
A new trend is shaking up the ETF industry: active management 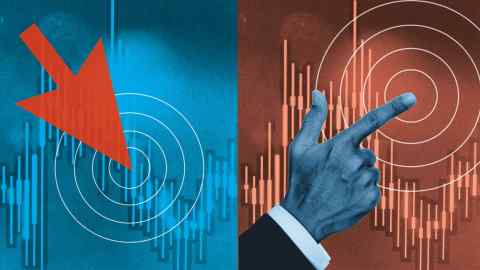 Thematic funds are the other big risers in the popularity charts as fund managers seek an edge in ever smaller niches.

“Thematic funds are especially interesting for retail investors because they can understand the story. It’s a story they are buying. [Something like] factor investing is much more complex to explain,” says Ms Ubaldino.

The stories being spun in the current zeitgeist include cyber security, so-called smart cities, semiconductors, biotechnology and climate change prevention, as well as medicinal cannabis, future mobility — encompassing the likes of electric and autonomous vehicles — the digital economy and goods and services favoured by millennials.

And some of these stories are proving highly popular. The two best-selling new ETFs so far this year are thematic products targeting semiconductors and new energy automobiles, both courtesy of China AMC, which had taken in $2.5bn and $1.5bn respectively as of April, according to ETFGI.

Thematic funds from a swath of other Chinese houses, such as E Fund Management, Taikang, Ping An and Yinhua, are also prominent on the best-sellers list, alongside two Indian fixed income funds focused on the bonds of state-run companies.

It seems not even the pandemic of the century can stop the juggernaut of the ETF industry in its tracks.