Generation Z turn to watches, not just phones, for the time

The young are keen on timepieces, but brands must innovate to woo them

Sign up to myFT Daily Digest to be the first to know about Cristiano Ronaldo news.

The perceived lack of interest in watches among young people is “a myth”, according to Omega’s chief executive, Raynald Aeschlimann. As head of a watch brand, he might be expected to say that, but the Jewellery and Watches Retailing Report, published by market research company Mintel in September 2016, confirmed that Generation Z — roughly defined as those born from the mid-1990s onwards — is keenest of all age groups on timepieces.

The report showed that one in five 16-24-year-olds were thinking of buying a watch “in the coming months”, as well as a similar percentage of those aged 25 to 34. It also found that the young are the biggest buyers of all age groups.

While an average of 12 per cent of people in Britain were considering buying a traditional or digital watch in the next six months, the report said, the figure rose to 26 per cent among men aged 16 to 24, and to 16 per cent among women. “Demand for classic timepieces remains strong among the youngest shoppers,” says retail analyst Alice Goody, who wrote the report.

A rash of data at the start of the decade suggested young people had lost interest in watches. A YouGov survey in 2011 found that 59 per cent of 16-34-year-olds in the US used a mobile phone to tell the time. While 69 per cent of them owned watches, only 26 per cent were wearing one at the time of the survey. A YouGov survey of British 18-39-year-olds in 2013 found that 61 per cent used a phone to tell the time.

Interest in watches among young buyers is largely fuelled by online engagement. “We conducted a survey among 3,000 people in China, Germany, Italy, Japan, the US and Switzerland. It confirmed bloggers and social media have a great influence on young people’s buying decisions,” says Luc Zobrist, an economic analyst at consultants Deloitte.

Ecommerce
With the Speedy Tuesday, buying watches online gets sophisticated 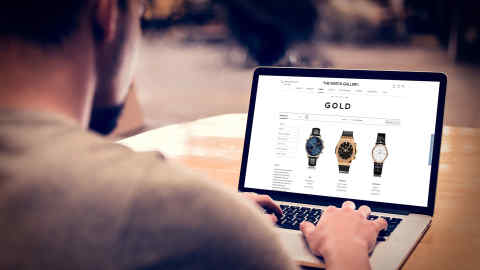 Luxury brands now invest heavily in social media strategies, youth-focused marketing campaigns and online retail platforms. According to Mintel’s report, consumers aged 27 to 36 are the most likely to buy a watch online.

TAG Heuer has signed up social-media ambassadors since Mr Biver became the company’s chief executive in 2014. Among them is footballer Cristiano Ronaldo, who has 94m Instagram followers. On New Year’s Day, Mr Ronaldo posted an image of himself wearing a TAG Heuer watch, adding the hashtags #tagheuer and #DontCrackUnderPressure, the brand’s strapline. It was liked 2.5m times. “The influence of the young is very important, even if they can’t buy for themselves,” says Mr Biver. “They influence their parents’ choices, for example.”

Smartwatches still face resistance among the young. According to Mintel’s research, 44 per cent of the 16 to 24 age group did not want to buy them; half of these were put off because prices remain high (the Apple Watch Series 1 starts from £269).

In January, Omega created a limited edition “Speedy Tuesday” version of its signature Speedmaster watch that sold out quickly. The name was taken from a term coined by an online fan. “Social media is no longer complementary to our marketing strategy, it’s the way we communicate,” says Mr Aeschlimann.

The pride of ownership is not sufficient any more. A product has to bring an experience. There is much more balance for the young

At the Salon International de la Haute Horlogerie watch fair in January, Baume & Mercier introduced a collection called My Classima. The quartz watches are priced under £1,000 and aimed at first-time luxury-watch buyers. The company commissioned a series of short, lively films designed to appeal to a young audience.

“We have invested a lot of money to get young people,” says Alain Zimmermann, chief executive of Baume & Mercier. “We have to seduce them. And these days, a lot of it comes down to social media. Three years ago, we produced one major movie a year. Now we make 10 short movies instead, because you have to post content every day.”

But social media alone are not a solution. You need the right stories to tell, he says. “Before [the young] invest their money, they want to be sure of the environmental impact and how the product is sourced.”

Get alerts on Cristiano Ronaldo when a new story is published