Are unexplained wealth orders the cure for Britain’s reputation as a haven for dirty money?

Henry Foy in Moscow and Barney Thompson in London

One evening in early March, a former Russian double agent and his daughter, visiting from Moscow, were found unresponsive on a park bench beside a nondescript shopping arcade in the soporific English town of Salisbury. In an attack that evoked memories of the murder of the dissident Alexander Litvinenko in London in 2006, Sergei and Yulia Skripal were poisoned with a nerve agent apparently traced to Russia.

Within hours, the frost was forming yet again on relations between the UK and the Kremlin. Diplomatic expulsions followed, but politicians and anti-corruption campaigners in the UK lined up to demand more effective action. The clamour grew to target the ultra-wealthy Russians who had long flaunted their wealth in Britain and who allegedly relied on President Vladimir Putin’s patronage to maintain their positions.

As the calls for action intensified, one solution seemed to be on everybody’s lips: unexplained wealth orders (UWOs). These are a type of court order introduced in January in the 2017 Criminal Finances Act and require the owner of an asset to explain how they were able to afford that asset. Sir Vince Cable, leader of the Liberal Democrats, endorsed the new tool when he called for “these oligarchs [to] explain in writing, with detailed documentation, just how they obtained their fortunes”.

Even before the Skripal attack, UWOs were hailed as the cure for Britain’s reputation as a haven for dirty money. In February, Ben Wallace, the UK’s security minister, told The Times UWOs could be used “against everyone from a local drug trafficker to an international oligarch or overseas criminal”. For added effect, he cited the television series McMafia, a dramatisation of a factual book that depicts a sprawling global network of criminality with Russian mobsters playing a starring role, as being “very close to the truth”.

Yet there are reasons to be sceptical: UWOs are “a good step in the right direction, but they are not a panacea”, says Andrew Gordon, head of fraud investigation and dispute services at EY, the consultancy.

Broadly speaking, UWOs can be used when there is an obvious gap between the value of an asset (which must be worth at least £50,000) and the income of the person who appears to own it — such as a foreign leader who claims to subsist on a modest salary yet owns a range of overseas properties. Luxury apartments in London or large countryside mansions have long been attractive to those seeking to hide money because they are valuable assets and ownership is relatively easy to disguise. Shell companies are often used to buy real estate in weakly regulated jurisdictions and multiple onward sales of properties to other criminals leave a confusing paper trail.

Unexplained wealth orders are aimed at two targets. The first is a “politically exposed person” (PEP), such as a politician or well-connected civil servant, as well as people close to them, provided they are not citizens of the European Economic Area. The second is a serious crime suspect, whether in the UK or abroad. 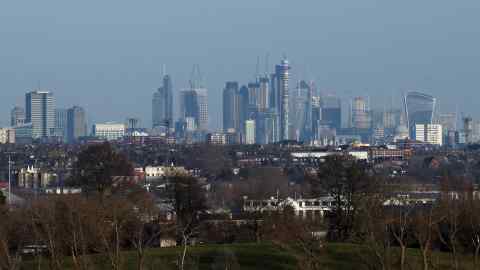 What has caught the eye of anti-corruption activists is that UWOs shift the burden of proof to the asset’s owner. Previously it was up to law enforcement agencies to prove in court that an asset was purchased with laundered funds. “Before this it was almost impossible for law enforcement to act on suspicious transactions without a criminal conviction,” says Rachel Davies Teka, head of advocacy at Transparency International UK, an anti-corruption non-governmental organisation. “The UK government’s record on corruption has been mixed, but this new law is probably the most important piece of anti-corruption legislation since the [UK] Bribery Act in 2010.”

There is plenty of suspect money coming into the UK, experts say. One figure frequently cited in money-laundering reports to describe the amount concealed in the UK each year is £90bn. But in its 2017 assessment of serious and organised crime, the National Crime Agency said it was “likely that previous estimates of £36bn to £90bn . . . are a significant underestimate”.

The list of nationalities suspected of money laundering in the UK is long, but since the Skripal case the focus has been almost exclusively on Russians, notably Putin’s allies and acquaintances. Igor Shuvalov, Russia’s first deputy prime minister, has been mentioned in parliament by Cable as one of the small circle of Russians who are “critical to the Putin operation”. Cable has also repeated claims that Shuvalov owns two apartments together worth about £11.4m at 4 Whitehall Court, a château-style edifice a stone’s throw from the heart of the UK’s government machinery in central London. A spokesperson for Shuvalov was not available for comment. Anti-corruption campaigners point to the Whitehall Court flats as an example of the sort of property that the authorities ought to be investigating.

Still, while UWOs are a potentially powerful tool for law enforcement, they have rarely been used. In February, the National Crime Agency secured two orders targeting properties in London and the south-east of England believed to be owned by one unidentified foreign politician (not thought to be Russian). Donald Toon, the NCA’s director of economic crime, says more action is in the pipeline: “We have a number of other cases which we’re currently developing, involving both PEPs and people with links to serious crime. We have live investigations into professional enablers.” Yet he adds that “money laundering covers a multitude of sins . . . and is not susceptible to any individual silver bullet.”

Lawyers say it is crucial to pick the right fight. “For UWOs to have credibility, the authorities will want the first uses of them to be successful,” explains Matthew Cowie, a white-collar crime partner at Dechert, the law firm, and a former prosecutor at the UK’s Serious Fraud Office (SFO). “It would be bad political PR and bad for [UWOs as an instrument] if they fail.”

That means remembering what the “U” in UWO stands for. Many oligarchs lead lavish lifestyles and have proven political connections, but the sources of their income are not unexplained, or even unlawful, even if they are controversial. “One of the key tests is having reasonable grounds to suspect that a person’s lawful income would be insufficient to buy their property,” says Michael Potts, managing partner at law firm Byrne and Partners. “If an oligarch can point to, say, an aluminium smelter he owns, in the absence of any other evidence, that ends that argument.”

There is also a fear that UWOs could turn into a political weapon. It is true, says Cowie, that the SFO has a mandate to punish fraud and to fight corruption, including corruption overseas. “But it doesn’t have an anti-kleptocracy mandate. [UWOs] are an area that could be intensely political and quite subjective.”

However, while UWOs are a popular topic in Westminster, the agencies authorised to deploy them — the SFO, the NCA, HM Revenue & Customs, the Crown Prosecution Service and the Financial Conduct Authority — remain independent. The orders cannot be mandated by politicians as a way of hitting back at the Kremlin. Instead, they must be considered as part of a concerted effort by the UK government to crack down on money laundering. There is no doubt that the UK has been sharpening up its act regarding economic crime. The Criminal Finances Act, which came into force last year, made companies liable for failing to prevent their employees from evading taxes. The 2010 Bribery Act did the same for bribery and corruption.

The UK government is also planning to create a public register of the owners of foreign companies through which many UK properties have been purchased. Ministers are campaigning for a so-called “Magnitsky amendment” — similar to the US act of the same name that freezes assets and bans visas for foreign officials involved in corruption and human rights abuses. Theresa May, the UK prime minister, said in March that the programme under which more than 700 wealthy Russians came to Britain on investor visas between 2008 and 2015 is under review.

The NCA’s Toon argues that the UK is heading in the right direction and is now “significantly more alert” to money laundering. “Certainly within banking, the focus has been on the money-laundering risk — there’s clearly a real move to get dirty money out of the financial system,” he says. “And we are seeing more engagement from the wider financial services sector and supporting professions [such as law and accountancy].”

The question is whether the new measures will be a deterrent to money launderers, regardless of where they come from. “What concerns me is that law enforcement is reactive — and criminals are very smart,” says Paul Radu, executive director of the Organized Crime and Corruption Reporting Project, a global consortium of investigative journalists. “Over the past decade, criminals have shown that they are way ahead of not just law enforcement but also banks. Will money launderers turn towards other places? Yes, probably. But they really love London, like they love Paris. And they see these places as cities for safe investments.”

In the case of Putin’s loyal oligarchs, it may be too late for meaningful action. “We have given a lot of British passports to Russians quite cheaply,” says one white-collar crime lawyer. “London is an attractive place to live. Perhaps we should have set a higher price.”