About midway through Amy Whitaker’s time at art school, she began giving informal lunchtime lectures to her fellow students about business and economics. Ms Whitaker was a rather exotic creature on campus — before enrolling in her Masters in Fine Art at University College London’s Slade School, she had earned an MBA from Yale’s School of Management.

For these lectures, Ms Whitaker would tape old copies of the Financial Times to her paintings to use as a whiteboard — art schools are open places with few walls — and would draw diagrams with a Magic Marker. “I wanted artists to be able to pull up a chair to the table of how the world works,” she says, adding that the first time she taught she was so nervous no one would turn up that she brought cookies and beer.

The lectures were not about helping her fellow classmates earn a living from their art, per se. “It was much more of a ‘derive the equation’ approach, like: ‘here are the blocks you can build with,’ more than, ‘here are the rules you follow.’”

Ms Whitaker has since forged a career out of teaching business to artists and art to business people. Her new book, Art Thinking: How to Carve Out Creative Space in a World of Schedules, Budgets, and Bosses, focuses on the latter.

Drawing on her expertise in business and art, the book aims to give every worker who wants to try something different the courage to begin a new project, launch a start-up, write a book, or explore some other plan. It is part self-help manual and part business tome.

“My goal is people will feel freedom to engage with their creative selves even in extremely structured environments,” she says.

Her ideas on the need to cultivate creativity tap into the corporate zeitgeist. In recent years, many business schools across the US and Europe have teamed up with design schools for new programming aimed at fostering creative thinking in MBA students.

The Johns Hopkins Carey Business School and Maryland Institute College of Art offer a joint MBA/MA in Design Leadership, for instance. The Weatherhead School of Management at Case Western Reserve and the Rotman School of Management at the University of Toronto have integrated the disciplines of design into their curriculums, while Chicago Booth has a visiting artist that teaches MBA and other masters students how the creative process can be translated into innovative thinking for the corporate world.

At the same time, companies in Silicon Valley and beyond are seeking ways to boost the creative output of their employees through workplace play areas, fun office activities and games. Innovation is the buzzword du jour.

But while Ms Whitaker’s manifesto devotes some ink to promoting workplace creativity, her more urgent call is geared towards nurturing personal creative impulses — whether they relate to your career or are in an altogether different field. Her objective is to help readers construct a life of “originality and meaning within the real constraints of the market economy”.

The market will pay you to do stuff you already know. But it won’t pay you to learn something new

According to Ms Whitaker the principles of art thinking closely resemble those of design thinking, with more emphasis on leading from questions rather than towards solutions. Design thinking asks: how can we do it better?

“But in art thinking,” she says, “by definition you don’t know the destination when you start. So the question is: is this even possible?”

Having both an MBA and MFA has taught her just how interconnected creativity and commerce are. The trick, she says, is finding the time and money to explore — which she must concede is no easy task.

“The market is not good at paying people to do research and development,” she says. “It will pay you to do stuff you already know. But it won’t pay you to learn something new. So you find a black box of space in your income statement to cover your R&D.” 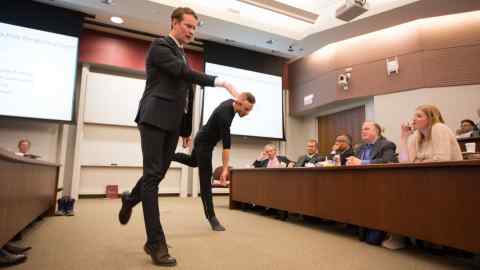 For artists, this kind of resourcefulness is second nature, she says.

Ms Whitaker grew up in Memphis, Tennessee, the middle child of a neurologist father and English professor mother. She went to business school with plans to become a museum manager, but after the sudden death of her father her career path diverged and she later enrolled in a painting programme at Slade.

While there, she became fascinated with Dutch guild paintings, such as Rembrandt’s “The Night Watch”, which depicts a group of militiamen. Studying these works, it dawned on her they were “acts of announcing professional affiliation”, and so she embarked on a series of six-foot tall paintings called “Modern Day Guilds”, which includes the “Guild of McKinsey consultants” and the “Guild of Investment Bankers”.

“I think I was obsessed with professional identity because I didn’t have one at the time,” she says.

Today Ms Whitaker is rather less consumed by job titles and more thoughtful about using her creativity in professional and personal life. “I have work that I love and I have to remind myself all the time that I am not my work,” she says.

Studio time: a chance to experiment

Reimagining your work and life requires setting aside space “for open-ended, failure-is-possible” experimentation — or what Ms Whitaker calls “studio time”.

Finding those unscheduled hours to explore something new is a challenge, so ask yourself how much time or space can you afford, she says. Is it possible to skip a meeting every other week? Can you reduce the number of hours you watch television each night? Think of your studio time as a period to indulge your curiosity, she adds. “Do anything you want with that time . . . The point is to give yourself ritualised time and space to learn and do.”

And do not worry about success — at least not at first. Procrastinate on judging. There is a cognitive bias between seeing your own work in progress and other people’s finished products, she says. “It keeps you from trusting the process.”

Besides, as Ms Whitaker points out, judgment is fallible. Elvis Presley got fired from the Grand Ole Opry after one performance and Fred Smith got a C on his college term paper that laid out the idea of an overnight-delivery service that would become FedEx.