Register here to receive this briefing by email every Friday.

“I have patients who come in suffering from an addiction to Candy Crush Saga, and they’re substantially similar to people who come in with a cocaine disorder,” writes a US doctor. In the UK, a 10-year old had to be treated for serious bowel and bladder problems after his gaming habit stopped him going to the toilet.

Cases such as these have led the World Health Organization to include “gaming disorder” in its new Classification of Diseases.

The UK this week announced its first dedicated clinic for addicts. In the US, rehab programmes such as ReStart are becoming more popular. Some suggest copying the tactics of smoking cessation programmes with a mix of advertising bans, packaging regulations and taxes while forcing developers to build in enforced breaks and signpost help within games.

Public health authorities face tough competitors. Developers, back in the spotlight after the success of Fortnite — the online shooter game — said the WHO move was “clearly prejudicial against gaming as a hobby and interest.” With 2.6bn people players in a global market expected to be worth $180bn within three years, the industry will not be laying down its weapons anytime soon.

We spoke to Jeffrey Moe, joint proposer of the Priority Review Voucher, an incentive designed to stimulate the development of drugs for tropical and rare diseases by awarding a voucher granting accelerated US regulatory review. The voucher can be used by the company or sold to others who can use it for their own drug. Over the past decade, 21 have been given out, including one this month for moxydectin to treat river blindness.

Has the voucher system proved effective? 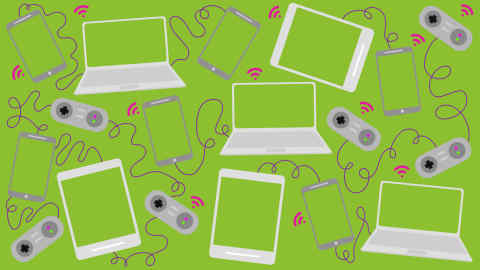 It has exceeded our expectations. We’re enthusiastically surprised by the innovative uses others have found for it. I’m fascinated by the way it has been used as a financial instrument to encourage investment in global health and in helping improve access — notably for moxydectin and benznidazole for Chagas disease.

Does it have flaws?

It should only be used where there is a market failure. I’m not convinced it was needed to stimulate innovation for some rare paediatric cancer treatments or that medical countermeasures should have become eligible. The value of the voucher is inversely proportional to the number issued, so it has fallen from $350m to $120m.

Should there be enhancements to the mechanism?

We need to hold voucher-winning companies accountable to make their neglected tropical disease medicines accessible to patients who need them. We have called in a paper for the voucher concept to be extended to vector control agents to encourage innovation where resistance is increasing. We need incentives for a comprehensive approach including rapid diagnostic tests, effective drugs and vector control.

Disease preparedness A new website charts countries' readiness to deal with disease outbreaks. More than 100 countries will be assessed by the end of the year: more than 80 per cent of those analysed so far are not ready for an epidemic. (Prevent Epidemics)

WTO lights up tobacco debate The World Trade Organization backed Australia's strict plain-packaging rules for tobacco, opening the door for similar measures elsewhere. Separately, a new analysis said the tobacco and alcohol industry might have influenced the Brussels Declaration, an international agreement that argues for the need to protect science from vested interests, while another study said tobacco companies were undermining efforts to curb the illicit cigarette trade. (ABC News, BMJ Tobacco Control)

New high for opium and cocaine The United Nations’ World Drug Report showed expanding markets with opium and cocaine at record production levels. Online trafficking continues to grow while non-medical use of prescription drugs has reached epidemic proportions in some countries. Arguments are raging in the US about how the victims of opioids — the biggest cause of drug deaths — should be treated. (UN, FT Magazine)

Medical marijuana The US Food and Drug Administration has approved its first cannabis-derived drug. Epidiolex, developed for childhood epilepsy by the UK's GW Pharmaceuticals, is expected to receive European approval early next year. Listen to our podcast on the entrepreneurs trying to cash in on the medical marijuana boom. (FT)

SDG success A progress report on the UN'sSustainable Development Goals — which include the aim to “ensure healthy lives and promote wellbeing for all at all ages” — showed maternal and under-five mortality had fallen and HIV incidence had dropped. Cases of malaria had also fallen, albeit not quickly enough to reach the target of ending the disease by 2030. (United Nations)

Guns and dementia Measures can be taken to stop those with mental illness from getting guns — but what should be done about those already in the homes of ageing Americans with declining mental faculties? Forty-five per cent of those aged 65 and older have firearms at home. (Kaiser Health News)

Action on obesity The UK is mulling mandatory calorie-labelling on menus, banning the sale of energy drinks to the young and more advertising restrictions as part of its anti-obesity strategy, although some fear the food industry could dilute the plans. Official data illustrate how Britain's poorest areas have the highest concentration of fast-food outlets. (FT, Guardian, Public Health England)

Taxing the sweet stuff The UK is just one of the countries levying a sugar tax but implementation varies across the world. In Australia, drinks companies are busy reformulating products to head off the threat. (LSHTM, Sydney Morning Herald)

NHS nears its 70th Britain's NHS prepares for its 70th birthday amid renewed financial pressures and a study unfavourably comparing its results with those of other countries. Broadcast highlights include the BBC's How the NHS changed our world. A competition aims to adapt space technology to improve patient care. MPs meanwhile called for action to fund adult social care — including a new tax on the over-40s. (FT, BBC, UK parliament)

Who wants to be 100? Even older than the NHS, the world record for human longevity currently stands at 122 — but this could be topped, according to new research. The downside is living with a multitude of diseases. (NYT, The Conversation)

Spain tops for transplants Spain has the highest rate of organ donation after death largely due to its policy of “presumed consent”. Initiatives elsewhere include Israel's scheme giving preference to living donors when a patient needs an urgent transplant. (Mosaic article and video)

Art and medicine Paintings have been used for medical education since the Middle Ages. A new book looks at how our approach to illness has changed over time and how this is reflected in art. (Art UK podcast, 36m)

Best from the journals

Superbug struggle Jim O'Neill, the former Goldman Sachs economist and leader of a UK review into antimicrobial resistance, said the pharma industry had failed to commit to the battle against drug-resistant superbugs and called for a new tax on drug sales. Just three companies — GlaxoSmithKline, Roche and Shionogi — are active in the field. (Journal of Applied Microbiology)

Trade and public health National policymakers often frame regulations for food, drink and tobacco to comply with international trade rules, but this can dilute their public health ramifications. Countries delay, alter, or repeal their national rules to avoid the costs of a dispute. (PLoS).

Maternal health A new drug that prevents excessive bleeding following childbirth could save many women’s lives in poorer countries. About 70,000 women die every year because of post-partum haemorrhage — increasing the risk that their babies also die early. (NEJM)

Cracking the Codex A guide to the role of Codex, the international food standards agency, and its significance for labelling and consumer health. (PLoS)

Podcast of the week

Lessons from 1918 A discussion of the global flu pandemic of 1918 and the lessons that can still be learned today. (The Lancet Infectious Diseases)

Chilling fact Just in case any more proof were needed of Britain's status as Fat Man of Europe: London mortuaries are having to find larger fridges to accommodate obese bodies.