How I Spend It: Billy Porter on high heels

I grew up in the black church in Pittsburgh, Pennsylvania. The black American church is a fashion show. As a child, I’d see the ladies wearing heels and hats – they called them crowns – and it’s like the whole thing was a celebration of regality. They may have been relegated to menial jobs but when they went to church they played royalty; it was in the hat and the heels and it was about reclaiming that space in their own beings. My aunt Sharon had a closet filled with these amazing high heels and I just loved them. I would put them on and my feet didn’t fit, and I just couldn’t wait for the day when my foot would fit in them so that I could walk for real. It was instinctive; it’s not a surprise that I turned out to be this person that I am, when I think about it in retrospect.

I was probably about 12 or 13 when my feet grew big enough to fit those shoes, and then one day I got caught. The heels were taken from me and there was a lock on the door. After that I always dabbled here and there; I would use the excuse of Halloween to wear them. It was a difficult space, though, because being an actor, being a black man, you have to be masculine. I ran from it for a really long time, and the only way that I would wear heels was if a job required me to do it. There were a couple of plays, a couple of Halloweens where I flirted with the silhouette of wearing a heel, and then the stage musical Kinky Boots happened.

With Kinky Boots, I realised that the conversation about the masculine and the feminine, vis-a-vis masculine being powerful and feminine being weak, is absolutely a fallacy, because as a black gay man, I never felt more powerful than when I was on that stage, in those kinky boots, in that show. That was where I found my power – the power I had been running from all my life.

But what’s really interesting about it is that even though I did that show for three years, there was still a disconnect between me playing a character and wearing feminine clothing – including heels – and me the real Billy. It never occurred to me that I could play with feminine silhouettes and wear heels in my own personal Billy life.

Later on I was getting ready to go out on a little mini tour with my music, and I knew that I was searching for a look. I’d been in this musical theatre/cabaret space, and I knew that my goal was to cross back over into mainstream music, and was going to need a look to do that. What was that look going to be? I’d seen Rick Owens’ designs, and I walked into the flagship store downtown in SoHo, where the lady told me it was all unisex. I don’t know why she knew I needed to hear that, because I didn’t even ask, but I was just looking at this stuff because it was very rock ’n’ roll. Up until then my image had been a bit goody-good, and I was looking for an edgier look, and Rick Owens is very gender-bendy.

So I bought an entire wardrobe that day to go out on the road in for my concerts. I was playing with skirts, I was playing with platforms. If you go back to the 1970s, men were wearing platforms. If you think about rock ’n’ roll, men wear high-heel platforms all the time, whether it’s David Bowie or Kiss. So there was a precedent for it that opened up a space that made me feel a little more comfortable and not so much of a target.

That’s where it started, and then being cast as the ballroom emcee Pray Tell in Pose happened, and then the idea of this red-carpet world came into play, and it was very intentional for me to choose to express myself, my creativity and my authenticity, in a different way than I had previously done in that space for my whole life. The way I dress is artistic, but it’s also totally a revolutionary and political act. It’s intentional. Heels make you walk with a different kind of uprightness, which for me has helped with my courage, it’s helped me with my pride in myself. It’s taught me how to feel good about myself and it’s part of my brand – like Samson and his hair.

HTSI
How I Spend It: Toyah Willcox on rocks, hag stones and meteorites 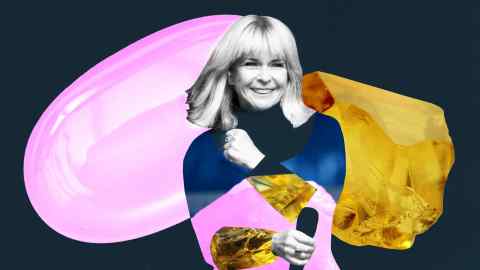 Billy Porter’s shoe collaboration with Jimmy Choo is available now. His autobiography, Unprotected: A Memoir, is published by Abrams at £19.99, and his new single, “Children”, is on Island and Republic Records. On Monday 29 November, he will host the British Fashion Council’s 2021 Fashion Awards at the Royal Albert Hall, London