Uncertainty looms for foreign students in US graduating in pandemic

Overseas students contribute billions of dollars, but find themselves questioning the cost

Sign up to myFT Daily Digest to be the first to know about Education news.

International students graduating from American universities in the pandemic face a host of challenges — travel restrictions, visa uncertainties, xenophobia and a struggling job market are just some of the things making life as a foreign student difficult. But beyond the class of 2020, Covid-19 will probably deter future international enrolment, costing US higher education and the broader economy billions of dollars.

Fees collected from international students have become an important source of funding for universities. According to the Department of Education, tuition accounted for more than 20 per cent of all university funding in the 2017-18 school year — the largest category of all revenue streams.

The National Association of Foreign Student Affairs (Nafsa) estimates international students contributed $41bn to the US economy in 2019. Nafsa predicts Covid-19’s impact on international enrolment for the 2020-21 school year will cost the higher education industry at least $3bn.

From the student perspective, coming to the US from abroad is a costly investment — and the pandemic and Trump-era visa rules have made it an even riskier gamble. For many, studying at an American university was worth the price for a chance to start a career in the US — data from Customs and Immigration Enforcement show that roughly a third of all international students in 2018 worked in the country through student work authorisation programmes.

The Financial Times asked its student readers to tell us what graduating in a pandemic is like. More than 400 readers responded to our call — many of those were international students, weathering the pandemic from countries far from their families and friends. These are some of their stories:

When Otto Saymeh came to the US to study architecture in 2013, he was also fleeing a civil war. Originally from Damascus, Syria, Mr Saymeh has not been able to see his family or friends since he arrived in the US.

“I was supposed to study abroad in Berlin, and that got cancelled. I was excited because I was going to be able to use that opportunity of being abroad through school to actually visit other places . . . like to see my family,” Mr Saymeh said. Now, with the uncertainty of the pandemic, he does not think he will be able to visit any time soon.

“You came here and you had this certain plan that was going to solve all the other problems, but now even being here is actually a problem,” Mr Saymeh said. The country’s uncertain economic outlook, as well as the administration’s response to the coronavirus, has shaken Mr Saymeh’s optimism and shattered his perceptions of the country.

“You expect more [from the US] . . . but then you realise it’s not really different from anywhere else in the world,” he says. “It’s taking care of certain people. It’s not for everyone. You’d rethink your belonging here.”

After gaining asylum status in 2019, Mr Saymeh is on his way to becoming a citizen. Still, the uncertainty of the pandemic has forced him to confront questions of identity.

“In a way, I still consider myself Syrian, because I was born and raised there for 19 years, but now . . . I’ve lived here enough to actually learn probably more about the politics and the system and everything . . . than maybe in Syria.”

Recalling a recent call with one of his childhood friends in Syria, Mr Saymeh reflected on his “double identity”.

“I was talking to my best friend back home,” he said. “His nephew, he’s probably like four years old and I never met the kid, is asking my friend who he’s talking to. So he told him ‘Otto from the USA is talking, but he’s my friend and we know each other from Syria.’ And the kid literally just said I’m an American coward. A four-year old.

“So you can imagine the complexity of being here, or having that identity and learning a certain viewpoint, and moving here and seeing it the other way.”

Jan Zdrálek grew up in Prague dreaming of becoming a diplomat. After graduating from university in Europe, he applied to Johns Hopkins University’s School of Advanced International Studies because “it’s the best education in my field”. He was admitted and enrolled in the two-year programme in 2018.

“[I was] hoping to use SAIS as a springboard for job experience in the US or somewhere else in the world, which almost happened,” Mr Zdrálek said.

But before he graduated in mid-May, the pandemic’s severe human and economic impacts could already be felt worldwide. Universities around the world closed campuses and sent students home to finish their studies online. At SAIS, counsellors at the career services office were telling international students that they would be better off searching for jobs in their home countries.

“As I saw it, the window of opportunity was beginning to close in the US . . . I decided to go back home, kind of lay low and save some money, because I realised I might not be able to pay rent for some time.”

But for students like Mr Zdrálek — who spent a lot of his time outside class networking with DC professionals — returning home also means abandoning the professional networks they spent years developing in the US.

“My decision to go to SAIS was a big investment, and it’s not paying off. That’s the main problem,” he said. “Basically [international students] are either at the same or even below the starting position of their peers who stayed at home for the past two years.”

“Even though we have this good degree — a very good degree from a good university — we don’t have the connection and network at home,” he said.

“It all takes time, and [I’m] basically thrown into a place where other people have an advantage over [me] because they know the place better, even though this is my birth town.”

Before she graduated in May, Erin, who preferred to not give her full name, was looking for a job in finance. She had completed an internship at a large international firm during the prior summer, and her post-grad job hunt was going well.

“I had job offers I didn’t take because I was trying to stay in the US, and I was really optimistic about my future here,” she said.

Erin — who is half-Chinese, half-Japanese and was raised in England — was planning to work in the US after graduation through the Optional Practical Training (OPT) programme, which allows international students to stay in the US for at least one year if they find a job related to their studies. For students planning to work in the US long-term, OPT is seen as one way to bridge the gap between a student visa and a work visa.

Some international students choose to start their OPT before completing their studies in hopes of finding an internship that will lead to a full-time offer. But Erin strategised by saving her year on OPT for after graduation.

I graduated, and for the first time I felt like I had no path

Her OPT starts October 1, but companies she was interviewing with have frozen hiring or limited their recruiting to US citizens. Erin and her international classmates looking to start their careers in the US are now entering the worst job market since the Great Depression, trapping them in a limbo somewhere between unemployment and deportation.

“I graduated, and for the first time I felt like I had no path,” she said.

Compounding foreign students’ uncertainty is the unclear future of OPT under the Trump administration. “It’s very possible that [President] Trump could completely cancel OPT as well, so that’s something to think about.”

Students with a Chinese background such as Erin have had to weather Donald Trump’s polarising immigration rhetoric, as well as inflammatory remarks about the pandemic’s origins. Many now fear anti-Asian sentiment in hiring. “I have a very obviously Asian name, so to a certain extent I have to think about racial bias when it comes to everything,” Erin said.

“The US, especially New York, is meant to be this immigrant paradise, where it’s the American dream to be able to work there from nothing,” she said. “It’s really increasingly difficult . . . to remain and to continue your education and your career in the US.”

After a decade working in private equity and investment banking, Yasmina Mekouar, a 31-year-old student originally from Morocco, enrolled in the University of California’s real estate and design programme.

“In my last job I was working at a PE fund that focused on fintech in emerging markets. I had originally joined them to help them raise a real estate private equity fund for Africa. That didn’t materialise,” she said, “But I’m passionate about real estate and I couldn’t really get the kind of experience I wanted [there].”

“I wanted to learn from the best so I came here.”

The year-long programme was supposed to end in May, but the pandemic forced Ms Mekouar to delay her graduation.

“One of the requirements for my programme is to do a practical dissertation type of project,” she said. “And for mine and for many other students’, we needed to be in some physical places, we needed to meet people, do a bunch of interviews, and of course, when this happened in March, a lot of the professionals we wanted to speak to weren’t around or not really willing to meet over Zoom while they were trying to fight fires.”

While Ms Mekouar is confronting many of the same challenges other international students are dealing with right now, she remains optimistic.

“Everybody is facing some sort of uncertainty as they’re graduating, but we’ve got the additional uncertainty that we’re not even sure that we’re applying [for jobs] in the right country,” she said. “But I don’t think international students are faring the worst right now.”

The last time she graduated was in 2010, in the wake of the global financial crisis. “The situation was a bit iffy,” she said, “but I learnt more probably in those few months than I had ever before — when things are going wrong, you just learn so much more.”

With her experience navigating the aftermath of the financial crisis, Ms Mekouar is trying to help her classmates “see behind the noise” of the pandemic and identify opportunities for growth when “everybody else is thinking it’s the end of the world”.

Ms Mekouar is hoping to work in the US after graduation, but if she has to leave, it could mean progress for her long-term career goals. “My dream after all of this was to start my own development company in [west Africa]. So it might accelerate those plans. Even though it’s a tough time, I might as well start.”

Explore the series
READ MORE
US graduates in crisis: ‘Entry level jobs are not safe at all’ 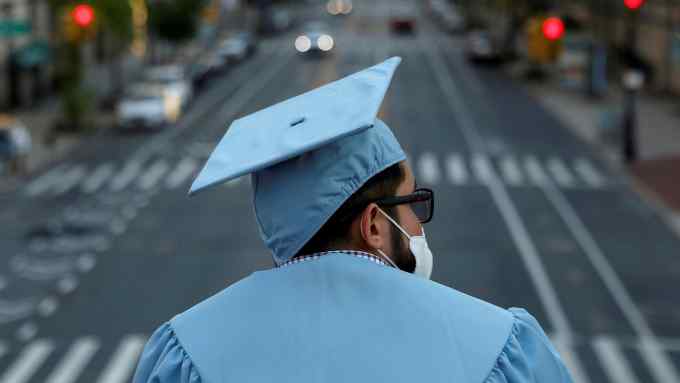