Facebook has taken down a disinformation campaign that it says was connected to Roger Stone, the longtime associate of Donald Trump sentenced to prison earlier this year for interfering in a congressional investigation, and the far-right hate group Proud Boys.

The social media company on Wednesday said it had found a network of more than 100 fake Facebook accounts and pages posing as Florida residents that pushed narratives around the US 2016 election, Mr Stone’s 2019 trial and, more recently, local politics in Florida, where Mr Stone is a resident.

Facebook said that its investigation “linked this network to Roger Stone and his associates”, as well as Proud Boys, a hate group that the platform banned in 2018. The network spent more than $300,000 on advertising, it said.

Mr Stone’s Instagram account — which Facebook said it would ban alongside his other accounts across the platform — was at one point managed by Jacob Engels, a Proud Boys member. The group came into the spotlight last month after Facebook culled accounts connected to it which discussed sending armed agitators to the protests following the killing of George Floyd.

Mr Stone was convicted last year of lying to Congress about his efforts to contact WikiLeaks during the 2016 presidential election. His case has since been at the centre of claims of undue political influence at the Department of Justice.

Mr Stone was ultimately sentenced in February to 40 months in prison. He is set to report to jail next week after the judge in his case declined to delay the start of his sentence until September.

Mr Stone has made a last-minute appeal to a federal appeals court in Washington and has also publicly called for Mr Trump to either commute his sentence or pardon him. In a Fox Business interview last month, Mr Stone said he wanted to be free to help with the president’s re-election battle.

While many of the posts focused on Mr Stone — promoting his books and later proclaiming his innocence — the network was also used to attack opponents, according to an analysis of the content by media monitoring group Graphika.

A meme featuring the personal details of the judge who temporarily halted Mr Trump’s travel ban in 2017 was posted and reposted by accounts in the network, telling followers to “call or email me”.

The network also ran a systematic campaign against a Florida senate bill on water quality and land ownership. Accounts posted messages directly to elected officials, telling them to vote against the bill, as well as sharing critical posts to other pages. The bill passed in 2017.

Facebook executives said a “small portion” of the network shared posts about the hacked information posted on WikiLeaks.

FT Swamp Notes
What I learnt from lunch with Roger Stone 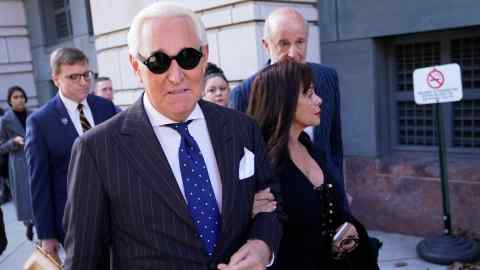 In April, search warrants from Mr Stone's case, released after US news outlets sued, said that his assistant had bought “a couple hundred fake Facebook accounts” as part of an effort to push content published by WikiLeaks.

The assistant told investigators that the accounts were to be used by bloggers working for Mr Stone to build what appeared to be a real network of Facebook users.

Mr Stone’s legal team did not immediately return an emailed request for comment.

Separately, Facebook announced the takedown of another disinformation campaign originating in Brazil, featuring close to 100 accounts and pages, which it linked to employees in the offices of elected officials, including Brazil’s president Jair Bolsonaro.

These accounts posted “criticism of the political opposition, media organizations and journalists” as well as narratives around coronavirus, Facebook said.

Two other campaigns were run by PR and advertising agencies, in a sign of the growing “disinformation-for-hire” market. One, which spent about $1.4m on advertising on Facebook, was attributed to “political consultants and former government employees in Ecuador”, and Estraterra, a Canada-based public relations group.

The other, a Ukrainian campaign, was linked to Postmen DA, an advertising agency in Ukraine, and spent nearly $2m on ads.