In the middle of last year, just as the world’s biggest clothing retailers were beginning their annual barrage of pre-autumn knitwear advertising, the Japanese fashion retailer Uniqlo took its campaign in an unexpected direction.

With a flourish of nerdishness, Uniqlo released a commercial about the groundbreaking industrial process behind its new seamless knit-dress collection. This was new territory for apparel-makers, who are more often at pains to downplay how their products are made. In a hat-tip to one of Japan’s lesser-known engineering marvels, the closing shot lingered on the MACH2XS Wholegarment knitting machine that makes the clothes.

The advert was quirky and eye-catching, but the campaign was more than a gimmick. The machine, made by the Kansai-based precision engineering company Shima Seiki, is at the heart of what both the company, and a handful of key customers such as Uniqlo and a number of large Chinese outsourcers, view as a genuine manufacturing revolution. It is also seen as part of the answer to the problem of waste in the garment industry — a special abhorrence in the parsimonious Kansai region, according to Shima Seiki’s president, Mitsuhiro Shima.

Just as the development and refinement of 3D printing machines is seen by some as the precursor of big changes in manufacturing and distribution, the idea of “3D knitwear” pioneered by Shima Seiki also carries the potential to shift the geography of the clothing industry, allow for more factory automation and accelerate the cycles for new design.

The machine produces an entire garment — including the arms, collars and other parts that would normally be produced separately and sewn on — on a single machine using a single thread. By streamlining production so aggressively, say its makers, the Wholegarment machine addresses two of the biggest challenges for manufacturers: waste of material and, particularly in Japan, the shrinkage of the labour force due to the country’s declining population.

For Uniqlo, which has embraced the machine’s potential and has spent the past three years building an army of them, the Wholegarment technology, when combined with greater volume and accuracy of customer data, offers the prospect of customisation. Mass-market garments such as dresses and suits will theoretically be produced to the exact size of the end customer.

“Uniqlo has been putting a lot of effort into building a new production system based on the latest manufacturing technology for knitwear, while at the same time achieving joint product development with Shima Seiki,” says Shuichi Nakajima, group officer for production at Uniqlo’s parent company, the Japanese fashion group Fast Retailing. He says Uniqlo’s collaboration with Shima Seiki and their machine was part of a broader quest to improve quality and design in supply chain processes.

Shima Seiki began developing its Wholegarment machines in 1995 and has continued perfecting them ever since: in the financial year to March 31 2019, the company sold 1,521 machines worldwide. Liu Jingyuan, an analyst at Goldman Sachs who follows sales of Wholegarment in Asia, forecasts that annual sales will be roughly double that in the financial year ending March 2021. The main bottleneck, argues Mr Liu, will be parts shortages rather than final demand.

Supply capacity shortages, technical issues and staff training are areas that Shima Seiki will need to address in the near term, Mr Liu advised in a recent note to investors, adding that China’s apparel industry is facing challenges regarding labour shortages, high costs and environmental protection. “We believe Wholegarment machines offer solutions to these,” he said.

Shima Seiki’s machine — which others have tried and failed to mimic — is in the company’s factory in Kansai’s textile heartland of Wakayama, just south of Osaka. Inside the factory, engineers point to one of the world’s most sophisticated glove-making machines, a device that produces an entire knitted glove in a few minutes from a single piece of yarn, significantly reducing waste. From that arose the idea of making larger, seamless garments the same way.

That conceptual leap, explains Mr Shima, was the key. Companies such as Uniqlo, H&M and Zara have pushed the boundaries of fast fashion and cheap mass production of high-end clothing. Over the past 20 years, the volume of delivered products has doubled, while unit prices have more than halved. The benefit of this, says Mr Shima, whose company also produces conventional fabric-making machines, is that people can buy cheap clothing.

The downside is that about 20 to 30 per cent of fabric sold in solid colours goes to waste in the manufacturing process, he says. “For fabric with a pattern, the waste level is up to 50 per cent. About 30m tons of yarn — or 30 per cent of the annual total — is thrown away.” 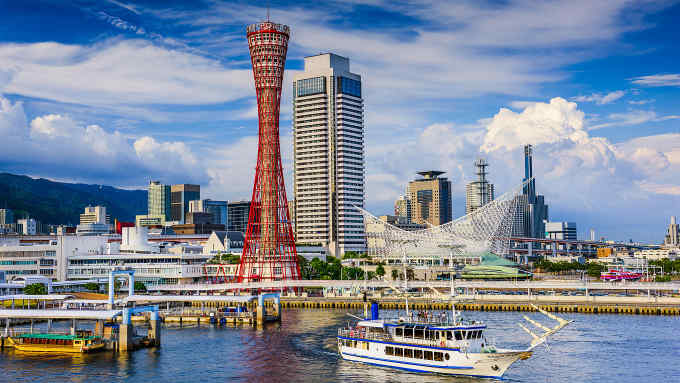 Japan’s historic Kansai region is staging a comeback. We look at how innovation in Osaka, Kobe and Kyoto is shaping the whole country’s future. Plus: a floating medical tech hub, plans for a billion-dollar casino, and a jumper made from one single thread