What makes Japanese eyewear so good?

The country’s glasses remain unmatched. We find out why

The assurance of “made in Japan” suggests a certain level of myth as much as quality. From the Damascus steel of a Shun knife to the advanced polyesters at Comme des Garçons, it connects heritage obsession with forward-thinking technology.

One area in which Japanese manufacturing particularly excels is in its eyewear, which features the best of its tradition and dazzling engineering, as well as a difficulty of execution that can seem almost wilfully deliberate. “When we visit our makers in Japan, we get to see incredible things,” says Cody Cho, vice-president of the LA-based brand Dita, which recently opened its first London flagship in Knightsbridge. “It’s always a mix of the old world and the new – there are men using Toyota machinery from the ’30s, and then you have guys immersing titanium sheets in water and using lasers to cut into them.”

Dita, founded in 1995, is just one brand that relies on Japanese savoir-faire to create the very best in eyewear. Its Epiluxury line of frames (from £1,300), launched in 2019, represents a flamboyant experiment in engineering, each with three interchangeable temples (the two arms of the glasses, which extend behind the ears). You can swap them for an opulent material for a swanky evening event, or a snug cable version if you’re riding a rollercoaster.

Like the extraordinary selvedge denim woven in Kojima, it’s the materials used in Japanese eyewear that make them so impressive. Pick up a pair of Dita Mastix frames and you can tell the acetate is special, with a higher gloss than its European equivalents: it’s a plant-based cellulose originally developed to replace ivory, and the Japanese have elevated it sky-high. “We use a special variety that is highly compressed so that it’s structurally very strong, but also thin,” says James Kisgen, who relaunched the Matsuda brand in 2012. “Japanese acetate is also aged for a long time, so it has a deep, rich colour.”

In the ’80s Mitsuhiro Matsuda was as famous as Rei Kawakubo, Issey Miyake and Yohji Yamamoto as the face of Japanese fashion in the west. But while his clothing label is now consigned to the realm of vintage dealers and collectors, his eyewear – originally marketed under the brand Nicole Co – has won over a new generation of customers. The aesthetic still has an essence of the ’80s, but in the most stylish way: think of Ray Petri shoots in The Face, or Jean Reno playing a louche Parisian. Many of the designs are updates on original frames, but tweaked for a more comfortable fit, in lighter materials. There are also wholly new designs, featuring intricate decorative detailing true to the original Matsuda aesthetic, but “our bestselling frames are actually the extremely simple 10103H [priced at £489]”, says Kisgen. “They are from our Heritage line, but as well as being popular 40 years ago, they are based on the pince-nez, so they were in fashion 120 years ago too.”

One of the strongest heritage brands in the market is Masunaga, founded in 1905. “In 1933 the brand presented three solid-gold frames to the emperor of Japan when he visited our base in Fukui,” says design director Yasunori Masunaga. “Our Masunaga GMS series is inspired by those frames. In terms of recent designs, the Chord series is particularly popular. We are unique in that we are the only optical company in Japan with a factory that covers every aspect of the production process.”

The story of Japanese eyewear is also the story of titanium. Many of the Matsuda pieces would have originally been created in Monel, a metal alloy. Titanium is much stronger and lighter, and became popular in Japan in the 1980s when the artisans of Sabae – the city where the Japanese eyewear industry was founded in the early 20th century as a sideline to support farmers off-season – worked out how it could be machined successfully. “When I find pirated versions of these in markets, they weigh a ton,” says Cody Cho, waving a pair of Dita Flight.006 frames. “When you wear our original, you barely know you have them on.”

Such advances in technology explain why western brands such as Nine Eyewear in Denmark and Mr Leight in California continue to outsource manufacturing to Japan. Many of the most beautiful frames made by Jacques Marie Mage are realised there, having started their life being sketched by founder Jerome Mage. “They keep their old machines alive and work in a really traditional way,” says Mage. “If you go to Italy, all their machines are new, and it’s all automated. The Japanese are about bettering the process, not the machine they use. You can feel each piece is handcrafted, but it’s so subtle.”

Of course, eyewear has to be handsome as well as innovative. This year’s Japan Eyewear Award winners included chic 3D printed Masakï Matsushïma frames, while the -3106 frames by Design88, incorporating multiple layers of coloured coatings, are intended to weather over time, the scratches becoming more and more obvious. It’s eyewear as future heirloom.

HTSI
The brands behind the great glasses revolution 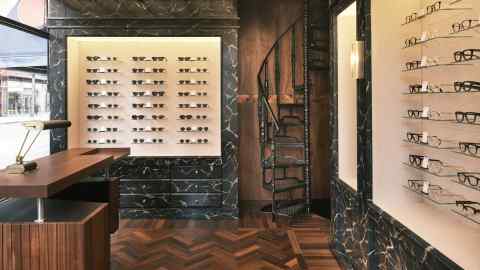 Another winner in the “Product” category at the iF Design Awards this year was the Minamoto range, launched in Sabae last year by Charmant (from £186). Like many of the newer players in the Japanese eyewear field, its imagery is rooted in history. “We have a private museum in Sabae,” explains designer Nicolas Berne, “and I have spent a lot of time studying Japanese eyewear from the 18th to mid-20th centuries. We want to blend handcrafting with minimalism.”

Then there are the landmark designs themselves, such as the IM-101 series by Issey Miyake, which originally debuted in 1985 and was made famous by appearing on stars like Jean-Michel Basquiat. The simplicity of its circular lenses and the straight bar across the top are reminiscent of the Bauhaus. The original frames were made in-house at Miyake (using nickel alloy), but a re-edition in 2018 was produced by Kaneko, updated with titanium – the result of an ongoing licence deal signed in 2015 between the two. Despite the Hiroshima-born designer’s recent death, they will continue to produce new designs under the name Issey Miyake Eyes.

Recent frames were inspired by the Dutch Elementarist movement of the 1920s, aligned with the spirit of de stijl. Once again though, they are typically Japanese – elements from the past, refashioned into something by modern means, designed for the future.