Accept & continue
Manage cookies
How To Spend It Property

Where do you sit on the ‘mappiness’ index?

Health and wellbeing ratings are now major factors when it comes to buying a property. Here are the happiest places around

Measuring happiness is subjective, but that hasn’t stopped a host of public and private bodies – from the United Nations to American asset management company Mercer – from giving it a go. Wellness and wellbeing are increasingly considered an indicator of national performance. Last year, global estate agent Knight Frank published its own index of domestic bliss for the property market, ranking 40 global cities on criteria such as work-life balance, access to green space and hours of sunshine.

“The Wealth Report Attitudes Survey shows that 80 per cent of UHNWIs [ultra-high-net-worth individuals] are dedicating more of their time and money to wellbeing,” the report concluded as it ranked Norway’s Oslo top of the index, followed by Zurich, Helsinki and Vienna. Madrid also appeared in the top five. The highest-ranking city for Australasia was Sydney (which was placed seventh), and in North America, Montreal ranked ninth. In Asia, Singapore came in 10th, and from the Middle East, Dubai arrived in 15th place.

In many ways, the crisis has brought these criteria to the fore. “The pandemic hasn’t essentially changed what people are looking for, but they have had the time to examine their lives and decide what really matters,” says Liam Bailey, global head of research at Knight Frank. “And those with the luxury of a secure income have been able to put these priorities into action.”

One must-have on this list is the provision of green space, frequently used for rewilding or as a kitchen garden, which is reflected in the much-publicised urban exodus experienced in the US and UK. “We’ve never sold so many country houses in the £2m-to-£5m bracket as we have over the past year,” Bailey confirms. Demand is strong but there are gems to be found, including a Grade II-listed Georgian house in Gloucestershire, encircled by 7.5 acres of garden and woodland, on sale through Savills for £2.2m. For bucolic splendour stateside, Houlihan Lawrence is marketing a six-bedroom house with 3.85 acres in Greenwich, Connecticut, for sale at $7.495m.

Even omitting the catalyst of a crisis, long-term research into happiness indicates that direct access to nature has a positive mood-altering effect, evidenced by the 66,000 participants who monitored their own mental state on “mappiness”, the happiness mapping app, created by Dr George MacKerron, who is senior lecturer in the economics of environment, energy and climate change at the University of Sussex Business School, and Professor Susana Mourato of the London School of Economics. “We found a clear link between subjective wellbeing and the natural world, with participants experiencing significantly higher levels of happiness near nature and water than in built-up areas,” MacKerron explains.

Fortunately for die-hard urbanites, fast-tracking a move to the country is not the only route to nature – many of the cities that regularly rank highly on happiness tables, such as Zurich and Vienna, have dedicated more than 40 per cent of their public realm to communal greenery. In the latter’s leafy northwest corner, Knight Frank is currently selling apartments in 1190 Vienna, a development located between rolling vineyards and the metropolis, from €1.49m.

In Milan, a city not particularly known for its verdant public past, the wealthy business district of Porta Nuova has quickly become celebrated for its eco-positive approach to regeneration. Here, over the past 15 years, a disused railway yard has been redefined by a creation of a botanical park, Biblioteca degli Alberi, and twin “forest” towers, Bosco Verticale. Residents in the towers (where apartments are available from €2.25m through Residenze Porta Nuova) cohabit with some 900 trees, 5,000 shrubs and 11,000 perennial plants, introduced by the Italian architect Stefano Boeri to mitigate smog and produce oxygen. The adjoining park, envisaged by Dutch designer Petra Blaisse of Inside Outside studio with “forest rooms” and some 135,000 plants, has acted as a magnetic refuge for the city’s many residents.

“People have flooded here just to be in touch with nature,” says Kelly Russell Catella, sustainable innovation committee chairman at COIMA, the property management company that has been at the forefront of delivering Porta Nuova’s green and pleasant aspect. “In the past, happiness was seen very much in the form of luxury goods. Now it’s the opportunity to be healthy, breathe fresh air, and spend time with the people you love.”

Lockdown has also helped to highlight the advantages of the “15-minute neighbourhood” – a self-sufficient zone where most residents’ needs are located within a short walk or bike ride of their home. This age-old concept has been given new credence by French-Colombian academic and scientist Carlos Moreno, a specialist in systems and innovation at the University of Paris 1 Pantheon-Sorbonne, and Paris City Hall’s special envoy for smart cities. Moreno believes that urban quality of life is vastly improved if it meets six key social functions – living, working, supplying, caring, learning and enjoying – and that the greatest happiness for the greatest number lies in our ability to access amenities from schools to hospitals, restaurants to culture, within 15 minutes of our homes.

Many older cities, of course, have evolved precisely on this model – London, with its web of villages, being a prime example. “Some of the UK’s most sought-after – and hence often most valuable – spots, such as Kensington and Notting Hill, are based on walkability,” says property consultant Gail Mayhew, who is a member of the Building Better, Building Beautiful Commission, a group advising the UK government on how to promote and increase high-quality design.

Mayhew and her colleagues have also identified factors they claim contribute to urban delight, looking at both contemporary and historic examples of best practice – from 19th-century triumphs such as Notting Hill (where Domus Nova is selling a five-bedroom house in Chepstow Villas for £15m) to the experimental new town of Poundbury, built on Duchy of Cornwall land in Dorset, where the Prince of Wales has set out to establish “an attractive place to live, work and play”. (Savills is selling a three-bedroom apartment in Poundbury for £1.7m.)

“We found that the most successful development is built on a human scale and is sympathetic to the natural environment, with a good social and commercial mix,” says Mayhew. “For a community to succeed, it’s also critical to have stability, and there needs to be a range of housing so residents don’t have to move away when circumstances change – for example, when they have children. This is at the heart of what community is about.”

In the past, happiness was seen in the form of luxury goods. Now it’s the opportunity to be healthy and spend time with loved ones”

The State, of course, can take on an interventionist role in furthering happiness, though few do it as comprehensively as New Zealand, which, in 2019, committed to its first “wellbeing” budget, devoting NZ$455m (about £240m) over four years to a frontline service for mental health, among other measures. In the Middle East, Dubai created its own Minister of State for Happiness, tasked with harmonising government plans, programmes and policies to achieve a happier society, back in 2016. “Focusing on happiness is both feasible and fully justified. It can be developed and its achievement linked to material objectives,” runs the official government line. “Studies have shown that happy people produce more, live longer and drive better economic development in their communities and countries.” 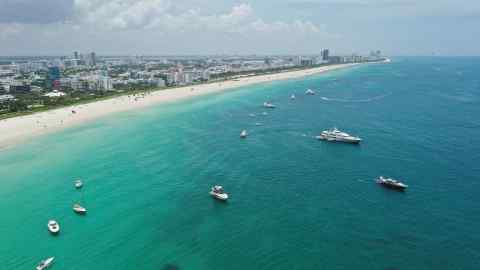 Dubai’s Wellbeing Academy has now trained 60 “chief happiness officers” to implement the national programme for Happiness and Positivity, and this year, as well as vaccinating its citizens more speedily than almost anywhere in the world, it supported their mental health through virtual support groups and speaker sessions. “Dubai has such a mix of nationalities, the government has wanted to make it a great place to live and call home,” says Maria Morris, head of residential in the Middle East for Knight Frank, which is offering a five-bedroom villa for sale on Frond F, Palm Jumeirah for £14.613m. “It is trying to foster a sense of community and, as people here spend a good deal of time outdoors, it places great emphasis in planning for wellness, introducing running tracks and the large Crystal Lagoon, filled with filtered water, where people can enjoy sports such as kayaking.”

Dubai, of course, benefits from other natural ingredients, which the mappiness app identified as likely to raise the spirits – namely “warm, dry, sunny weather” and waterside surroundings. These are, of course, characteristics it shares with Florida, which has witnessed an influx of well-heeled new residents in recent months, with real-estate brokers in Miami-Dade County recording their busiest season ever in 2020. (The lack of personal income tax in the state is, no doubt, a further contributor to the joy.)

Supermodels such as Cindy Crawford have stuck to the tried-and-tested coastal attractions of Miami (where CMC Real Estate is selling the duplex penthouse in Downtown Miami’s Brickell Flatiron Condominium, for $9.4m), but a more discreet elite has targeted Windsor, the residential enclave created by Canadian retail billionaires Hilary and Galen Weston. Located on the northern end of a barrier island off the coast of Vero Beach, the former citrus grove of 172 hectares has been transformed, through the Westons’ careful stewardship, into a picturesque community of Anglo-Caribbean architecture, with its own seaside village, as well as sports and leisure venues. Part country club, part networking campus for conservation-conscious philanthropists, Windsor (plots from $750,000 and houses from $2m, through Windsor Properties) has also proved appealing to younger buyers. “The past year has shown people they can do their jobs just as well from here as from anywhere else,” concludes Elizabeth Hanley, president of Windsor Real Estate Inc. “We’re a 15-minute drive from a private airport, 1.5 hours from Orlando and Palm Beach, and residents can be back in New York in three hours.”

Get alerts on Property when a new story is published