Assured luxury from one of Paris’s most storied houses, while Thom Browne shows nonsense with a message

The Hermès show in Paris for Spring/Summer 19 breezed by, and was transporting. The show was outside, in late evening sun. It was like you were sat in some resort café all flustered from unfamiliar heat, while made men more glamorous than you, more wealthy, more assured, sauntered past. Want to be them?

Zip-up blousons were cut from lambskin. Occasionally that lambskin had been rubberised for functionality. Three-button cotton drill or linen jackets were lightweight and looked easy to throw on. Some of the pants had drawstring waists. Many looks had a particular colour combination: pale blue with putty, orange with brick.

Models were young, as they are at most menswear shows. Towards the end, many were dressed in cotton short shorts. The reality of the brand’s customers is not young men. How would CEOs look with their legs bared? But then transport yourself again. Think CEOs on their respective yachts. Suddenly it all makes sense.

This is my final dispatch from the European men’s spring/summer 19 shows. It has been a season of power plays, with two big reveals left: Riccardo Tisci’s first collection at Burberry, and the introduction of menswear at Céline by Hedi Slimane. Both will take place in co-ed shows during womenswear.

But not all collections were about conglomerates and their search for their next billion dollars of profit. Thom Browne staged a show that looked like a joke, but which then revealed its resonant message. In the middle of the catwalk was a small gnome’s house. In it sat a Thom Browne gnome, looking happy as Larry. The catwalk was cut grass, and all around were baskets of fake flowers and balloons.

Models came out in candy colour versions of Thom Browne classics: shrunken suits, cricket sweaters, shorts as a given. First the looks came out clownishly oversized, then a more everyday version appeared. A little yellow zip-up rain mac looked fun to wear. A shrunken chunky orange-and-white knit cardigan was excellent. As the models walked by, the gnome shared a moment with other gnomes who were mowing the grass, or stood by his picket fence, waving occasionally at the crowd. I waved back.

That picket fence — it was painted in rainbow colours. The day of the show was Pride in many cities around the world. At the end, models wearing the pairs of looks came out hand in hand, or arm over shoulder. “It was just ridiculous and nonsense,” said Browne afterwards, “pure fun.” But often in queer communities, nonsense is often used as a tool to make a serious point. Browne was reaching for extreme idealism. “It’s the world where everybody gets along and loves each other,” he said. I was moved. Sometimes, that’s enough. 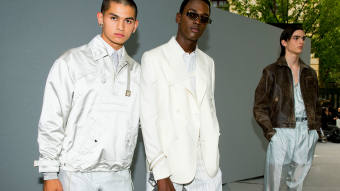