The first black woman to own a Chelsea gallery, she wants her artists to excavate and challenge reality

Nicola Vassell is a veteran of Art Basel Miami Beach. Shortly after the Swiss art fair launched its American edition in 2002, she made her inaugural pilgrimage as a junior member of the team at New York gallery Deitch Projects.

She has attended the Florida fair yearly since — as she climbed the ranks at leading galleries, formed an art advisory and curatorial consultancy, and finally, last year, founded a gallery of her own in New York City’s Chelsea district. “It’s full circle: I cut my teeth on this experience and now with my team I’m back on my own terms, showing work that we think will resonate,” says Vassell.

Her eponymous gallery on Tenth Avenue, the first gallery owned by a black woman to take root in Chelsea, opened its doors in May 2021. The inaugural exhibition featured photographs by Ming Smith, who will be the subject of an exhibition next February at New York’s Museum of Modern Art organised in conjunction with The Studio Museum in Harlem.

Nicola Vassell Gallery has since mounted 11 shows, most recently Light Forces, an intergenerational pairing of work by American sculptor Fred Eversley and the late Canadian painter Rita Letendre. “The gallery programme is rooted in a sense of wonder, but primarily, we are offering discourse that reframes the thresholds of the history and future of art,” says Vassell. “We are interested in science as much as sociopolitical issues, but we also want art viewing experiences to be potent and magical.”

For its inaugural turn at Art Basel Miami Beach last year, the gallery presented Color Vaults, which drew out the cosmic resonances in high-polish lens sculptures by Eversley — a former Nasa engineer — and irregular gemstone-studded panels by up-and-comer Alteronce Gumby.

This year’s display in the fair’s Nova sector, which is devoted to works created in the past three years, pairs work by Trinidadian painter Che Lovelace and Barbados-born, Scotland-based interdisciplinary artist Alberta Whittle. The booth is titled The Enigma of Arrival in reference to the 1987 novel by the late Trinidadian-born British Nobel laureate VS Naipaul, a canonical figure in postcolonial studies.

“As a woman from the West Indies, I find that whenever I visit Miami, I am pulled towards the Caribbean; I feel the magnetic force of the islands,” says Vassell. “Our programme travels down a path that considers the Caribbean context in all of its postcolonial, post-imperial sovereignty. I want to show work by artists who embody that spirit and reveal that certain notions of self and being, which an entire citizenry was taught to refute, are actually elemental and nourishing.”

Whittle, who is representing Scotland in the Venice Biennale, makes media-spanning work that frames collective care as a counter to anti-blackness, and community as a foundation for exploring freedom. At the fair, Whittle will present two large textile assemblages that consider Naipaul’s reflections on the relationship between land and history — “what stories are beneath the soil, roots and rocks,” the artist says. As they elicit an excavatory understanding of history, these new figurative works also engage with the transformative possibilities of masquerade and carnival.

“For me, Caribbean carnival or Mas is a special way to reimagine power because of its roots in colonisation but also how its foundation is based in Indigenous practices,” says Whittle. She notes that Lovelace’s paintings, which will appear alongside her assemblages, speak about carnival and colour with a distinctly Caribbean palette.

The five paintings by Lovelace slated for display in Miami, all from 2022, are each composed of four panels in a panoply of bold colours. The Trinidadian artist depicts the people, flora and fauna to which the island is home: bathers and swimmers, palm trees and fruit trees, ibises in flight.

“My practice roots itself in a meditation and often celebration of the bodies and activities of people here who constantly fascinate and inspire me, just as the physical and natural environment offer forms and configurations that are laden with an identity,” says Lovelace. “All considerations, social, political, aesthetic and otherwise emanate from this position of ‘place’.” Together, Vassell says, Lovelace’s and Whittle’s works tap into the psychology, mythology and day-to-day reality of life in the Caribbean and within the Caribbean diaspora.

Vassell herself was born in Jamaica, and moved to New York at the age of 17. She was modelling, writing and studying art history and business at New York University when she met art dealer Jeffrey Deitch, who offered her an internship. She rose to the role of director at Deitch Projects, after which she transitioned to a directorship at the mega-gallery Pace, where she worked closely with Light and Space artist Robert Irwin and learned about the operations of a blue-chip gallery. “It was exciting to find myself in that ecosystem,” Vassell says.

Finally launching her own gallery enabled her to consolidate all this varied experience. After the fair has wrapped, what’s next? On the docket for 2023 are international and domestic art fairs, including a solo booth at Frieze Los Angeles, and an ambitious programme that will kick off with a solo show of work by Brooklyn-based artist Julia Chiang. “It’s a continuous dance, right?” Vassell says of her ongoing journey. “You try, you fail, you get up, you fail again, then you totally succeed.”

READ MOREArt in the Americas
The Design Miami fair is maximalist, colourful — and provocative 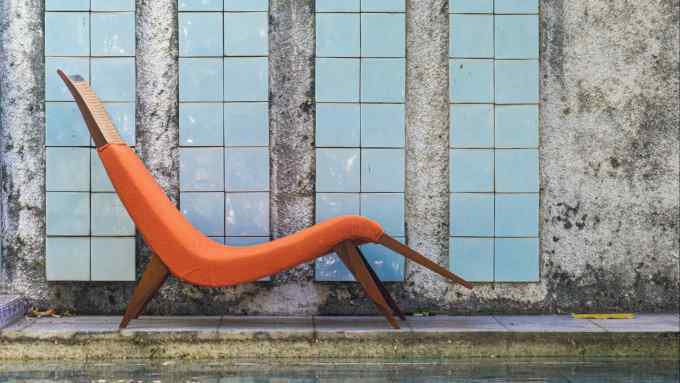