‘We packed fast’: those who left Ukraine, in their own words

More than 2mn refugees have fled to Poland. Photographer Michal Chelbin went there to make their portraits for FT Magazine

Arrived from Sarny in western Ukraine, with her mother Tatiana Kalushick, 37, Alina Mizjurko, 39, and Alina’s father Nikolaj Grucjuk, 72. Hosted by Karolina Godlewska, 39, and her dog Draco

Tatiana says:
“Alina and I know each other from childhood. I was afraid to come to Poland alone with my kid. I felt more safe to come with my friend and her father. My ex-husband lives in Kharkiv. When war started, he called us and said that it is unsafe there and that a lot of people are dying. He said that on the TV they don’t show what is really going on. I ran to Alina and said, ‘War has started, we have to do something.’ After a few days we decided to leave Sarny and came here.”

Karolina says:
“I watched the news in the evening and saw that war is happening. I was crying the entire weekend, and then decided I cannot cry any more and I must do something.”

Arrived from Chernihiv in northern Ukraine. Hosted by Maciej Zwierzyński, 38, and his wife Zuzanna Zwierzyńska, 32

Olga says:
“We expected the baby to come around March 8 but as a doctor I know it can be two weeks early. And that’s when the war started. When we heard the sirens, we went to our neighbour’s basement. When I heard that a mother gave birth in the basement of a hospital, I understood that I don’t want to be in the same situation.”

Maciej says:
“My office is responsible for preparing places for Ukrainian refugees. I was there and Olga came with her daughter, and we saw she was in her 39th week of pregnancy. I called my wife at 2am and asked if I can bring them to our house.”

Anastasia and Sonia arrived from Dnipro in central Ukraine. Hosted by the Świderski family

Anastasia says:
“My sister called me at 6am, February 24, and asked me if I am alive. I was shocked because I didn’t know what was happening at all, I didn’t listen to the news. My daughter was supposed to have a concert in the kindergarten that day, and she’d just woken up. We never watch the news on television, but after she called we turned it on to see what she was talking about. We saw that they started shooting and bombing all over Ukraine. I was shocked and didn’t know how to react. I started crying. We called a relative that has connections with the army and asked what to do, and she said that we have to leave the city.”

Marcin says:
“It was mostly my wife’s initiative [and] when Anastasia came to us, she asked why we are doing this, and it’s hard to explain. It’s something that feels so natural to us. Maybe because of ­historical reasons, that we thought that in the past, as a nation, we were abandoned during the war. So right now we feel this natural solidarity with this other country that is kind of in the same position — that there is an aggressor, and the rest of the world can’t really intervene, or they don’t want to. And I think that this is something that we as Polish people feel quite familiar with . . . There was no calculation. We didn’t even think it through that well.”

Arrived from Lutsk in north-western Ukraine. Hosted by Bernard Korona, 54, and his wife Malgorzata Ciszewska-Korona, 54

The twins say:
“One day we decided we needed to go. Our friend went alone to Poland, and he said that the Polish people are very welcoming and helpful. We packed fast and left Lutsk, where we lived and studied. Our parents and older brother stayed in Ukraine. We crossed the border on foot, then reached Chelm. And from there we were picked up by a volunteer Marek and with him we arrived in Warsaw.”

Bernard and Malgorzata say:
“It is necessary to help [because] they are still teenagers, and came alone, without parents. The guys spent the night with our friend, then stayed with us. And now they will live with our friends, who have a big house, and their children. So Vitalii and Vadym will not be sad, alone.”

Denys and his mother Natalia Rassamakina, 43, arrived from Kyiv. Hosted by Aleksandra Artymowska, 41, her husband Michal, 38, and their children Zosia and Janek

Natalia says:
“My work colleague sent a message that she was in Warsaw. It gave me motivation that we can also leave Kyiv. We checked for train tickets, and the closest date was March 5 . . . but we decided to go to the station and find any train that goes to the west.”

Aleksandra says:
“Taking in a Ukrainian family was the easiest thing to do. I can’t imagine myself in this situation. It would have been super-difficult for us. So it was just an obvious thing.”

Arrived from the Ivano-Frankivsk region in western Ukraine. Hosted by Mateusz Czuchnowski, 35, his wife Maria Wachowiak-Czuchnowska, 30, and son Teodor, 1

Tetiana says:
“We left February 25, so the kids don’t know that there is now a war in Ukraine. It will be better for them that they will not know about this horror. My husband’s brother told me he was going to Poland, taking his kids to their mother who works here. So I decided to go with him. My husband also works in Poland. He said that if I don’t come to Poland, he will come back to Ukraine and fight. It was an ultimatum.”

Maria says:
“A friend of a friend was going to the border and asking the Ukrainian volunteers at the border if they knew someone who needed a place to stay. They found Tetiana . . . and she agreed to come.”

With thanks to Katarzyna Dzierzawska and Yasmin Harel at the Polish Institute in Tel Aviv and Dorota Kwinta and Maria Wojdan at the Adam Mickiewicz Institute in Poland. Photographer’s assistant: Marek Kita; co-ordinator: Joanna Tatko. Shany Littman/Ha’aretz

Explore the series
READ MOREEdward Luce
Biden, Putin and the danger of Versailles 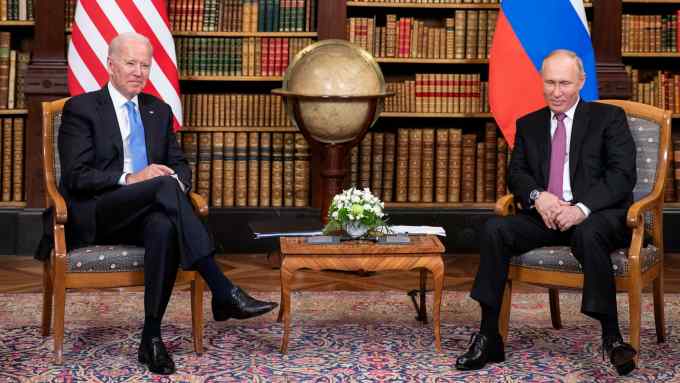