Germany’s coffers are overflowing but optimism is wearing thin

Europe’s biggest urban development scheme is under way in the German city of Hamburg alongside the busy Elbe river. In place of old warehouses and docks, construction companies are building offices, flats, shops, bars and hotels which will one day serve 12,000 residents and 40,000 workers.

There have been some setbacks but Hamburg is ploughing on with its master plan. With a growing population and dynamic industries, the city’s economy has plenty of momentum.

What is true for Hamburg is true for Germany. Despite political and economic turmoil in many parts of the world, Europe’s biggest economy is humming.

Exports are at record levels, while domestic consumption is strong with wages rising and unemployment at its lowest level since reunification 25 years ago. Many Germans are grumbling about the potential costs of 1m newly-arrived refugees but that is not stopping them from buying cars, foreign holidays and kitchens. Low interest rates are feeding surges in the housing market in big cities such as Berlin and Munich, as well as Hamburg.

“Germany is at the moment in a good economic position,” chancellor Angela Merkel said last month with typical understatement. “That helps us with managing [our] problems.” The government has raised its forecast for growth in gross domestic product to 1.8 per cent for 2016, from 1.7 per cent last year. The government’s coffers are overflowing, with bumper tax revenues set to generate a fiscal surplus for the second year running.

All this assists Ms Merkel as she presides over Germany’s turn at the helm of the G20 group of world economies and prepares for next year’s parliamentary elections. She is widely expected to stand for a fourth term. 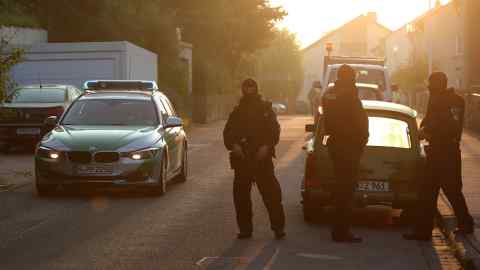 Not everything is plain sailing, however, even at home. Germany frets about Deutsche Bank, its struggling big lender, and has still to see the end of the scandal surrounding carmaker Volkswagen, its largest manufacturer, after it admitted cheating diesel exhaust emissions tests.

Other problems are lurking for the future, including growing skilled labour shortages, an ageing population, a creaky transport infrastructure and technological change that could undermine some of Germany’s competitive advantages. “This is a golden age for German industry,” says Martin Lück, chief investment strategist for Germany at BlackRock, the US-based investment group, “But I am worried about the medium term.”

Perhaps the most serious challenge is rising populism, which is making itself felt not only in anti-immigration sentiment provoked by the arrival of around 1m refugees since early 2015, but also in support for protectionism. Ulrich Grillo, head of the BDI, the German industry association, has called for political action against “globalisation bashing”.

Populism has undermined even support for the dominant Ms Merkel. The rightwing populist Alternative for Germany (AfD) party has helped to reduce backing for the chancellor’s ruling centre-right CDU/CSU bloc down from 41 per cent in the 2013 election to about 32 per cent in recent opinion polls.

This is a golden age for German industry. But I am worried about the medium term

Barring shocks, the CDU/CSU is expected to win the 2017 elections and lead a new coalition government. “Merkel at risk? Probably not,” says Holger Schmieding, strategist at Berenberg Bank. “She has no obvious rival or successor. Even without Merkel, any conceivable coalition in Berlin would be solidly pro-EU and pro-euro.”

That said, the aura of invincibility surrounding Ms Merkel has gone and with it much of the likelihood that the government will engage in radical market-oriented reforms of the kind which revived a stagnant German economy a decade ago. The biggest economic policy moves of the current parliament have been a compulsory minimum wage and hefty pensions handout.

The finance ministry calculates that Germany can afford such largesse, even if it is uncomfortable with the example it sets for weaker eurozone economies. Finance minister Wolfgang Schäuble is on course to cut the ratio of public debt to gross domestic product from more than 80 per cent six years ago to 60 per cent in 2020 — the eurozone’s planned ceiling level. The budget is generating surpluses, so the government is implementing tax cuts and hinting at more after the election. But handouts are kept under tight control. Berlin continues to resist pressure from the IMF, the European Commission and others to boost public spending and reduce the current account surplus — and so help invigorate other euro zone economies.

Ludger Schuknecht, the finance ministry’s chief economist, says the idea that public investment in Germany will somehow create demand in Spain is mistaken. “Experience shows that this does not work.”

Berlin is sticking to its sceptical view of the European Central Bank’s easy money policies. While the government benefits from near-zero interest rates in its debts, savers are angry that their deposits generate little income and German banks chafe at their wafer-thin margins. Mr Schäuble has even blamed, in part, the AfD’s rise on ECB president Mario Draghi.

Merkel at risk? Probably not. She has no obvious rival or successor

One group of buyers — Chinese investors — is so keen that Berlin has raised objections to them. In the first nine months of 2016, they bought 41 German enterprises worth $11.29bn — more than the cumulative total for all previous years, according to Dealogic, the data company. Officials insist that Germany remains open but are pressing Beijing for reciprocal rights in China.

While one or two interventions do not make a trend, growing calls for protectionism in Germany and the EU could encourage Berlin to scrutinise deals with China more closely. The difficulties that have arisen negotiating the planned free-trade deals with Canada and the US — Ceta and TTIP — also do not bode well for free trade and investment. As the BDI’s Mr Grillo says, “nationalism, protectionism and isolation” are on the rise, including in Germany.