Top tables to book, from Surry Hills to Beverly Hills

Singapore in the swing

Bouncing between Indonesia and Singapore last August, I found myself, lucky me, booked in for a night at Raffles, which underwent a comprehensive lift in 2019. Butcher’s Block is a new arrival to its fairly famous line-up of eating-drinking venues; and while it may not have the history or chops of The Long Bar or Tiffin Room, it impressed me the most of all of them. The room is sexy and pretty, with a pronounced lean towards the clubbish; dark-blue lacquered walls and ceiling, back-lit canteen shelves, the requisite open wood-fire kitchen that’s buzzing with sauciers and line cooks, lots of brass and copper detailing.

Chef de cuisine Jordan Keao is Hawaiian-born, and he brings the state’s traditions of farming and hunting to a menu that alternates macho (but never unsophisticated), prime cuts and potato paradigms with clever grazing treats – grilled baby corn with black-bean preserve, zingy lemon-chilli grilled kale with burrata, and an Australian riff on lamb tacos (with salad leaves standing in for tortillas) that instantly made the “Plates I’d Fly For” list. It’s eminently party-friendly – superb playlists, a neatly edited wine list with lots of magnums and jeroboams, and a couple of long, large-group tables. butchersblock.com.sg; raffles.com, from $1,000

Sharan Pasricha and Eiesha Bharti Pasricha hit on a golden formula when they revamped Gleneagles in Scotland some years ago; modelled broadly along country-house hotel lines, but brimming with sophistication – interiors, food and drink, and service that would play as successfully in Paris as it does here just outside Dundee – it was a winner more or less from day one.

Their new Edinburgh hotel, Gleneagles Townhouse, inverts the formula: grand country styling in an urban centre. The Spence, its all-day bar and restaurant, practically begs you to live a little from the moment you’re seated: shoot a couple of oysters (Argyle Rock, naturally), accept that top-up of Charles Heidsieck (or a negroni sbagliato, or a hibiscus G&T) and flag down the dessert trolley (how we love one of those).

The buzz is all-day-long and the soaring dome above and extravagant swags of velvet and silk all around you sanction any and all festive inclinations. gleneagles.com/townhouse, from £495

True, it’s not French. But the outpost of Langosteria that sits high atop La Samaritaine – which contains Cheval Blanc Paris, part of LVMH Hotel Management – has everything else to recommend it. Since he opened his original restaurant in Milan in 2007, Enrico Buonocore has been wowing patrons with exuberant but refined interpretations of the Italian seafood canon (the spaghetti with bottarga, raw prawns and lemon is a life-changer).

All that virtuosity is on show in the open kitchen here, where extrovert Italian chefs seem to be having as much fun as diners do (which is a lot, judging by the decibel levels). The room – low ceilings, wood-panelled walls, a long, long travertine bar for sexy tête-à-têtes – is contemporary perfection; and the Paris views out of its walls of windows are some of the best to be had anywhere. langosteria.com; chevalblanc.com, from €1,750

Summer’s coming to Sydney (if La Niña ever decides to pack it in, that is); so is the festive season. That means it’s al fresco revelry time, in which stakes Sydneysiders pretty much wipe the floor with the competition. Opened just in time to accommodate the more discerning class of Emerald City party person is Kiln, 18 floors up in the sky in the Ace Hotel, which itself debuted earlier this year. Chef Mitch Orr has put in time at Lyle’s in London and Osteria Francescana in Modena, and he knows his way around a robata and a sous-vide poacher, the seafood of Korea and tomatoes of Vesuvius.

Thus Asia and southern Europe mix dynamically in both food and cocktail menus: pair your tuna tartare, radish and turnip kimchi with a tomato & ricotta tartlet, after a Japanese berry highball (whiskey, bitters, lemon, shiso and soda). The interiors, by Melbourne powerhouse Fiona Lynch Office, use material salvaged from the hotel’s construction, pine from Tasmania, and stone quarried locally – they’re warm and appealingly edgy, and a nice compliment to the skyline perspective all around. kilnsydney.com; acehotel.com/sydney, from $290

And finally, one to mark for the spring 2023 celebrations: a storied New York institution is heading west to set up shop at the Maybourne Beverly Hills, Claridge’s rather fabulous West Coast little sister. Dante NYC (a MacDougal street bar stalwart for every generation of downtown scenester since, well, Prohibition) subtly reinvented itself in 2015 and has emerged as one of Manhattan’s favourite contemporary watering holes, with classic cocktails, modern Mediterranean food and a bustling scene.

Dante Beverly Hills will take up residence poolside on the Maybourne’s rooftop, serving its many elaborations on the negroni (bianco, chocolate, frappé – yes, really, frappé, and don’t knock it til you try it) as well as pizzas, roasted birds and more from a wood-fired oven in the kitchen. It’s almost impossible to imagine this being anything but an absolute roaring success. maybournebeverlyhills.com, from $895 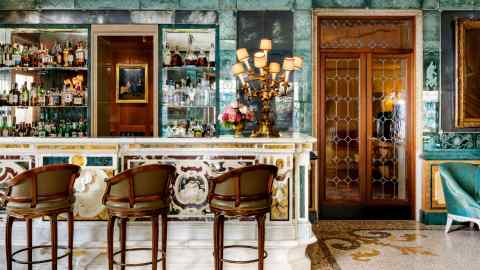