Changing face of Cuba is worth watching for investors

Just over 10 years ago I wondered in this column whether the next great frontier investment opportunity might be Cuba.

At the time there were tentative signs that this famously socialist economy (Jeremy Corbyn is a big fan) was beginning to open up to the evil capitalist global system. The problem was that although the US government was no longer actively hostile, relations with its northern neighbour were still a tad frosty, fraught with history and bad intentions. I worried at the time that this might be a slow, risky game and suggested taking a look at Ceiba Investments, a Cuban property investment company incorporated in Guernsey.

Ten years on and there’s been modest but steady progress. The Castros are no longer running everything and the “election” of Cuba’s new president Miguel Díaz-Canel offers a glimmer of hope that reforms might be about to speed up. Recent reports suggest that Cuba’s constitution might even include the confirmation of economic and social reforms.

In the world of investing, that small fund has grown. It is now a £130m fund that is looking to list on the London Stock Exchange, backed by asset management giant Aberdeen Standard. Yes, you read that right. A Cuban investment fund will soon be available to London-based capitalists. By my reckoning, this listed fund will be the only way adventurous investors can play the Cuban reform theme. How times have changed.

Crucially, the fund has delivered solid returns to its shareholders over those intervening 10 years. Annualised returns over the past five years have been 15.17 per cent in dollar terms and 19.48 per cent in sterling. Over 10 years returns have been 6 per cent a year in dollar terms and 10 per cent in sterling. It’s also worth noting that a decent chunk of those returns have come from a solid dividend yield of 4 per cent or more, which is still the target payout after the fund lists in London.

I have no crystal ball about Cuba’s prospects, but it seems to me that its new leadership will try to pioneer an approach that borrows some elements of the Chinese and Vietnamese reform programmes, while preserving a fundamentally socialist economy.

Foreign investors, especially the Spanish and Canadians, are already swarming over the economy, especially in tourism, but they’ll probably still be forced to enter via joint ventures with local state enterprises. The informal economy will also slowly formalise, but state-owned enterprises are likely to continue to play an outsized role.

The real growth opportunities for foreign investors will probably be in hard assets such as hotels and office blocks. This is where Ceiba plays. In effect, it looks and feels rather like a real estate investment trust that owns hotels and an office complex and pays a generous dividend. But Reits are viewed largely as income opportunities and the managers behind Ceiba think they can deliver more capital gains by reinvesting in their existing assets to improve yields. 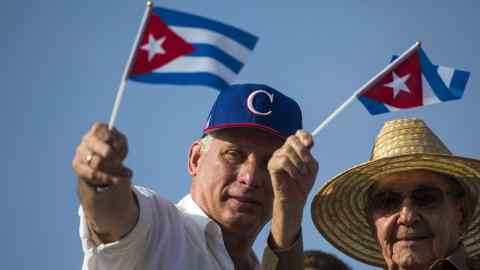 Tourism will play a big role. Cuba reported 4.7m tourist arrivals in 2017, an increase of 16.2 per cent on the previous year. The travel sector already accounts for just under 10 per cent of total GDP and 12 per cent of all employment.

The Ceiba investment portfolio reflects this bias. It part-owns four profitable hotels: a 400-room five-star hotel in Havana and three hotels comprising 1,438 rooms in Varadero, all operated by Meliã Hotels, Spain’s largest hotel company, which has an equity stake in the hotels.

There are presently close to 140 four- and five-star hotels in Cuba, most of which are wholly-owned by Cuban state-owned companies. Of these, only 15 are owned by joint venture companies and the Meliã hotel in Havana is, according to the fund managers, only “one of only three operating joint venture hotels in Havana”.

Alongside these hotels, the fund also owns the largest mixed-use office and retail commercial centre in Cuba. The Miramar Trade Center in Havana comprises six buildings and 600,000 sq ft (56,000 sq m) of net rentable area, 100 per cent let with a waiting list.

Who can predict what [president Trump] might do? But he has already signalled a toughening of embargoes

There are, of course, some very obvious risks. Cuba could reverse its liberalisation initiatives and clamp down on the private sector. Then there’s US president Donald Trump. Who can predict what he might do? But he has already signalled a toughening of embargoes. Sebastiaan Berger, chief executive of Ceiba Investments, says: “The areas we invest in have been profitable under a range of US presidents, so I think it will depend on how drastic a change in policy we’re talking about.”

My hunch is that, as with many big Trump ideas, the reality will be a little less radical than the tweets.

It’s also worth noting that the managers are now part of the big Aberdeen Standard Investments group and the new fund listing is looking to raise up to £100m but only via institutional and high net worth investors.

It is listing on the specialist funds segment of the London Stock Exchange, which means most retail investors won’t be able to participate in the new issue of shares but will be able to buy shares in the secondary market. According to the managers, the aim is to publish the prospectus within the next two weeks and for the fund to list by mid-September. But this is only a provisional plan and “events” could derail this timetable.

If they do not, though, I think the Aberdeen-backed Ceiba fund warrants closer attention from adventurous types. Its past returns are solid and the income yield is attractive. Crucially, it offers the real holy grail of investing: a low correlation bet on global equities, by investing in a country that wants to keep its distance from the global capitalist system.

David Stevenson is an active private investor. He has interests in securities where mentioned. Email: adventurous@ft.com. Twitter: @advinvestor