Idris Khan on his spiritual heritage and the power of colour

Idris Khan is riding the crest of a wave. Still only 41, the British contemporary artist has been displayed in institutions including the British Museum in London and the Whitworth in Manchester. In November, he unveiled a significant public sculpture, 65,000 Photographs, on London’s South Bank.

As well as being supported by two top dealers, Victoria Miro in London and Sean Kelly in New York, he received an OBE in 2017 — a year after he unveiled a vast public war memorial in Abu Dhabi.

His personal life also looks rosy. Khan is married to the sculptor Annie Morris, with whom he has two young children, as well as sharing a gracious, white-walled studio in Newington Green, north-east London. It’s there that we meet; Khan — tall, lean and bearded in dark jeans and zip-up jumper — walks me through Morris’s studio, which is dotted with frail, vibrant towers of spheres, into his own space.

A surprise awaits. Khan’s one-dimensional works have traditionally been starkly monochrome, often shimmering with lines of tiny text. But these paintings are done in deep, glowing blues, sometimes alive with whirling gestural strokes. Here and there, black musical notes erupt on to the white space, as if determined to be heard over the abstract roar.

To my eyes, these works, entitled Large Rhythm Paintings, are as powerful as any Khan has made. Yet when I exclaim my appreciation, Khan responds with modesty. “I’m always learning,” he says. “I don’t want to seem overconfident in what I do.” He goes on: “All these things are a progression.”

A clutch of Khan’s blue paintings have already been seen at Sean Kelly’s New York space last May. Now they are to take centre stage in a solo booth with Victoria Miro at Frieze Los Angeles. The shift in style began when Khan started working on gesso panels, which he sanded back to create what he describes as a “beautiful smooth surface”.

Khan points to two paintings on the other side of the room, featuring black-blue panels — plain at a distance but laden with illegible text when you draw near. Their intensity casts a spell over the space, as if Mark Rothko had found inspiration in a Renaissance Madonna.

The Large Rhythm Paintings emerged from Khan’s long-held fascination with musical scores. First, he colours scans of the scores with washes of watercolour paint, before photographing the results. Then he paints over each C-type print with an ultramarine oil stick, using fluid, gestural strokes — a process he describes as “writing over writing”. It’s as if Khan is speaking more freely from his unconscious than ever before.

As for the blue, Khan says at first that it was prompted by “being married to a sculptor who used it all the time”. But there’s more to it than that. Having worked for so long in monochrome, Khan was finding himself increasingly frustrated, “because we don’t see in black and white.” What he wanted to find, he says, was a colour that could “give me that same feeling, that spiritual quality” as his work in black and white.

Khan’s spiritual heritage is a significant strand in his work. Brought up a Muslim — he’s no longer observant — he grew up in Walsall. His Pakistan-born father was an orthopaedic surgeon, his Welsh mother a nurse and amateur pianist. His Islamic roots manifest themselves in various ways.

Early on, Khan developed the idea of photographing the pages of texts he loved, such as Beethoven’s piano sonatas and Roland Barthes’ Camera Lucida, then compressing them into abstract images, layer upon layer. Then his father suggested he do the same with the Koran.

The work, made in 2004, won critical acclaim. When Khan took it to Karachi to show his family, he also showed it to religious leaders, who were taken by its beauty.

Khan says he enjoys being able “to dip in and out” of his heritage. Aware that he possesses the “empathy” to work with Islam, he’s also conscious that his identity acts as a “licence” to make certain kinds of work.

He doubts that “someone with a western name could have made the Koran piece”, for example, or been commissioned, as Khan was, to build a memorial to the war dead of the United Arab Emirates. That sculpture, unveiled in 2016, is constructed from seven aluminium-encased steel tablets; 23m high, they are cast with poems by emirs of the UAE.

The country is known for its problematic record on human rights and treatment of migrant labourers, and also participated in the Saudi-led coalition that has led attacks against the Houthi population in Yemen, causing brutal civilian suffering since 2015. Did Khan have qualms about any of this?

He tells me that when he accepted the project, he was “very aware” of the country’s issues with human rights. But he was also intrigued by the challenge of creating “a big sculpture” — the memorial comes in at a whopping 42,000 sq m — and made every attempt to verify that the contractors working on his project received decent treatment. Ultimately, the artist hopes the work will be understood as a monument not just to the region’s soldiers, but “to anyone who has ever lost anyone”.

The subject has a personal resonance. In 2010, Khan lost his mother when she was just 59 years old. A little afterwards, he and Morris suffered a miscarriage. “It was like a loss and new life, and that was taken away from us as well,” he reflects, sucking in his breath at the memory.

His work, which had expressed notions of erasure and impermenance, now took on a new, private intensity. “I would come into the studio and write down all the feelings I was going through,” he recalls. “I started making rubber stamps of that text and stamping and stamping . . .” he pauses. “It was a cathartic process, like chanting.”

Like any good abstract expressionism, the new paintings succeed in conveying profound human feeling while also refusing reductive explanations. Khan gestures at the pristine white paper sandwiched between the bands of colour: “For me, the most present thing in the paintings became the spaces between the painting.” 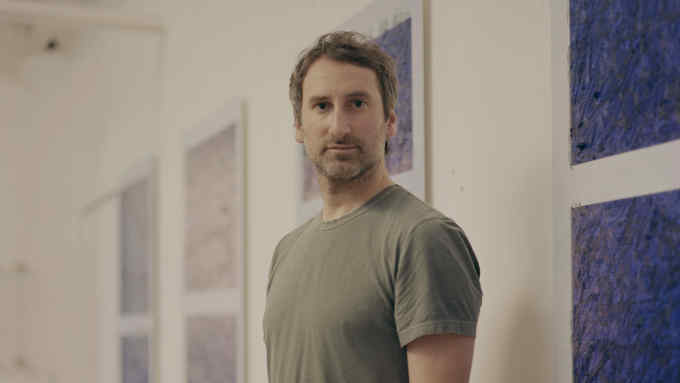