Carmakers’ designs on patents for the future

A technical revolution is driving differing approaches to protecting innovation

In 1959 an engineer at Volvo patented a device with the potential to transform driving — the three-point seatbelt.

The carmaker then did something extraordinary. Rather than guarding the technology closely and using its innovation to give it a competitive edge, it released the design into the public domain.

“Thanks to its decision to share the invention in the interest of improving traffic safety . . . the three-point seatbelt is estimated to have saved a million lives globally,” Volvo said this year.

More than half a century later, the car industry faces a similar dilemma over whether such advances should be shared.

Many companies have spent vast sums developing proprietary technology, from electric driving systems to autonomous capabilities. Some patents are for competing nascent technologies.

With limited capital and huge spending commitments, manufacturers can only afford to place so many bets — and they want them to succeed. Now, a wave of open patents is sweeping the industry.

“None of those companies are doing it because they want to help other companies to thrive at their expense,” says Nigel Swycher, chief executive at Cipher Automotive, which compiles patent data across the industry. “They want to help them thrive so they can thrive also. It’s an interesting dichotomy.”

Among the best known examples is Toyota’s decision this year to open up its hybrid driving patents. 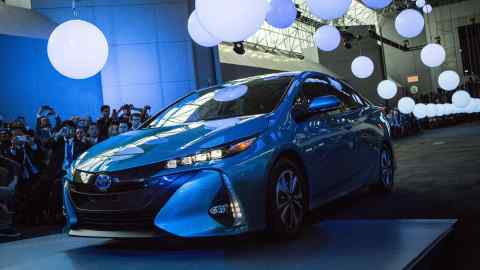 Whereas competitors could previously license the systems for a fee, now anyone can use the technology for free as long as they tell the automaker first.

“Based on the high volume of inquiries we receive about our vehicle electrification systems, from companies that recognise a need to popularise hybrid and other electrified vehicle technologies, we believe that now is the time for co-operation,” Shigeki Terashi, executive vice-president of Toyota, said in April.

The move will hurt Toyota in the short term — it was previously receiving royalty revenues from about 50 companies. But in the long term it wants to improve the survival chances of its own hybrid technology, in which a motor and battery work in sequence.

As regulators tighten emissions rules, some electric car options risk being squeezed out of existence. Toyota’s hybrid vehicles can only drive a very limited distance when solely using electric power, something that may lead to such cars being banned under proposed rules coming into force in the UK in 2040.

BMW is rolling out a system whereby its plug-in hybrid cars will automatically switch to electric-only power in city centres, in part to convince regulators of the merits of its technology, after the UK and others rolled back incentives for plug-in hybrids.

Pauline Debré, a partner at Linklaters in Paris who specialises in patent litigation, says that while it is “very counterintuitive” for patent specialists to open their innovation pools, “giving it to anybody for free helps to impose your model and your technology”.

Nowhere is the battle fought more fiercely than over designs. The industry is riddled with examples of Chinese companies that have copied western designs, prompting complaints from foreign carmakers. Honda, BMW and Fiat have all fallen prey to design copying by Chinese companies. 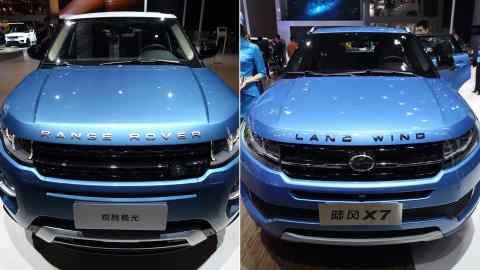 JLR has also used patents to protect its own vehicles closer to home. When Ineos, the chemicals group run by British billionaire Jim Ratcliffe, wanted to make its own off-road vehicle, it first tried to buy the designs for the Land Rover Defender from the British carmaker.

JLR pushed back despite suspending production of the Defender in 2016, and filed several sets of patents to safeguard its designs, stretching back to the vehicle’s first iteration in 1948.

On the surface, it was an unusual move — patents rarely protect a car’s shape. But for vehicles such as the Defender, the rugged, flat-sided design is core to their appeal. “[The] Defender will always be instantly recognisable as a Land Rover the world over,” said the carmaker, which is planning to release the latest iteration of the vehicle next year.

For other brands, the design can be a key part of the technology behind the vehicle itself. Dyson, which is trying to get into the car industry, filed its first patents for a vehicle about two years ago. It had already secured IP protection for a range of motor and battery technology — what it was seeking to protect was the shape of the car.

A heavily sloping windscreen and unusually large wheels may not seem critical elements to its planned car but the company believes these will help boost its efficiency, helping eke out the greatest range from a single charge of its electric battery.

“The whole point of an electric car is that it doesn’t waste power,” founder James Dyson told the Financial Times.

And in a memo about the car to staff, he highlighted the move to protect the designs.

“The vehicle will include fundamentally new technologies and make some inventive leaps,” Sir James wrote. “It is therefore important that we protect it with patents.”