Amazon gets its new HQs but what do the winning cities stand to gain?

The circus is over; Amazon is coming to town. More than a year after launching its quest for a second North American headquarters, or “HQ2”, the company has finally decided on a location for a new home. In fact, it has decided on two: Long Island City (LIC) in Queens, New York, and Crystal City in Arlington, Virginia, just over the Potomac from Washington DC.

The subtext to the contest was that a nod from Jeff Bezos’s empire could reshape an area, or an entire city, with regenerative force: jobs would come; house prices would rise. Already, say estate agents — glee scarcely contained — inquiries are spiralling. “The amount of calls I’m getting right now is crazy: people wanting to open a gym, a salon next to Amazon. Everyone’s trying to get in right now,” says Rick Rosa, a LIC-based agent with Douglas Elliman. He adds that even “Manhattanites who weren’t keen to leave the island will think about it now”.

Across the water, those Manhattanites will find a neighbourhood in flux, where great glass towers cluster by the riverside and one-time warehouses host breweries and bowling lanes. Amazon’s arrival is part of an ongoing renaissance for the area, says Elizabeth Lusskin, president of the Long Island City Partnership, a local development corporation. “All of that development was going to happen anyway,” she says, but having an anchor tenant has accelerated it.

Before Amazon’s announcement, LIC was already the city’s fastest-growing neighbourhood, with 1,436 new housing units approved in the year to July 1. In Corte, a new development in the north of the neighbourhood, a $1.395m, two-bedroom apartment was listed on Zillow on November 18, five days after the HQ2 decision was announced. Within two days an offer was made.

In Galerie, another project nearing completion, the majority of apartments — which range in price from $570,000 to $2.3m — are pending sale. The penthouse remains on the market, on sale for $2.15m with Halstead Property.

With transactions slow and sales prices falling in many areas of the city, Rosa says the news “couldn’t have come at a better time. It’s no secret that the market’s been down across the board. Buyers have been a lot more aggressive. Now the ball is on the seller side.”

In Crystal City Amazon’s decision is having a similar effect. “Our phones have been very busy with inquiries from investors and speculators from across the country,” says Chrissy O’Donnell, a local estate agent. “It’s not going to be Silicon Valley — but there will be an improvement.”

Crystal City today looks like a 1960s vision of the future: cuboid office blocks and apartment buildings occupy a slither of land between the Pentagon and Ronald Reagan Washington National Airport; underground walkways connect homes to workplaces and shops; all is dressed in concrete.

Amazon will reportedly spend $2.5bn and create up to 37,850 jobs over the next 20 years. Even spread over two decades, that influx of employees will put pressure on the housing market. “There’s not a lot of housing in Crystal City, but there are plenty of outlying areas, [such as] Arlington or Alexandria. I definitely think we’re going to see an increase in house prices,” says O’Donnell.

An Amazon salary (new hires will earn a little over $150,000 on average, according to Amazon) will go further here than in New York: $799,999 buys a four-bedroom detached house just south of Crystal City in Alexandria, listed with Coldwell Banker.

For LIC, the windfall from Amazon’s decision will be 25,000-40,000 jobs over the next decade and a half, and at least $2.3bn in capital investment, according to the company. Lusskin is confident that new jobs in LIC will be taken up by locals. “There are people here who can do the high-skilled jobs. If they [Amazon] didn’t believe this was a well-seeded talent pool it wouldn’t have made the decision to locate here.”

While locals are likely to benefit from employment opportunities, a direct subway link from the Citigroup building — where employees will initially be based — to Midtown Manhattan means any new hires living on “Billionaire’s Row” need not up sticks. For Bezos — one of the world’s richest men — it’s a civilised 20-minute ride from home on Central Park West to the new campus. Failing that, he could always fly: the offer from New York to Amazon allows for the construction of a heliport in LIC.

The quid pro quo for such largesse, estimates New York Governor Andrew Cuomo, is that the city’s new tenant could help create more than 100,000 jobs and generate $186bn in total economic impact in New York alone. “The revenue-to-incentive ratio is 9-to-1”, according to the governor. That seems optimistic: for every dollar Amazon invested in Seattle, home to its original HQ, an additional $1.40 for the city’s economy was generated, according to the company.

As well as clamour about new jobs and economic growth, there are plenty who feel that the two most prominent cities on the eastern seaboard — which have offered billions of dollars’ worth of subsidies and tax breaks to the company — are selling themselves short and that the real winner of the competition is Amazon itself.

The “competition clearly looks to have been a cynical ploy to gin up pressure for more tax breaks on the finalist cities and states”, is the view of Good Jobs First, a watchdog group on economic development incentives, which estimates LIC and Crystal City have collectively offered incentives to Amazon worth in excess of $4.6bn.

A further sweetener is that LIC and much of the surrounding area to Crystal City are federal opportunity zones. Investors in these zones — which were revived in a tax reform signed by President Donald Trump last year — can defer payments of capital gains taxes until 2026 and reduce the percentage of gains liable to tax if they hold the property for more than seven years.

The battle for Amazon’s favour was routinely described as a beauty contest, but the way it unfolded was perhaps more like reality-TV show The Apprentice, with contestants parading their credentials in the hope of winning the favour of a rich businessman.

“I’ll change my name to Amazon Cuomo if that’s what it takes,” promised Cuomo. Another contender, Stonecrest in Georgia, offered to rechristen itself “Amazon, Georgia” if it won its bid.

In all, Amazon received 238 bids from across the US. The winners were not the ones that offered the biggest subsidies — Montgomery County in Maryland proposed $8.5bn — but perhaps America’s capitals of finance and government didn’t need to.

Down the contest’s final straight, it became ever clearer that the new HQ would not be in a place urgently in need of economic renewal, but somewhere that would best serve Amazon’s needs: decent transport, a ready workforce, cultural cachet. As the list was whittled down, out went dozens of submissions from flyover states, as well-established coastal cities rose to the top. The new HQs will be within 5km of the White House and the Empire State Building respectively.

“When the Amazon RFP [request for proposals] came out, those of us who know LIC said ‘whoa, we tick every box’. We are already what they’re looking for. We don’t have to change for Amazon”, says Lusskin.

If LIC was attractive enough in the first instance, that has not prevented the subsidies ratcheting up, leaving some locals, such as state Senator Michael Gianaris, feeling short-changed. “I’m not against the company and jobs per se, but against the ‘ransom’ being paid out to the company,” he says.

The Amazon blockbuster has overshadowed a drama playing out elsewhere in the US — in which terms agreed between a state and a company appear to be drifting from the original agreement. Could the same happen in New York or Crystal City? “Amazon” Cuomo et al will hope not.

In Wisconsin, considerable effort was expended to woo Foxconn — a Taiwan-based company which makes, among other things, roughly half of the world’s iPhones. In return for a promised $10bn investment in a factory and the creation of 13,000 jobs, Wisconsin — with state governor Scott Walker at the helm — initially offered a $3bn subsidy, which has since reportedly risen to more than $4bn, or around $315,000 per employee, dwarfing Amazon’s per-head subsidy.

The company maintains that the promised investment will eventually be forthcoming, but much of the assembly line work will be done by robots.

In the past month, Foxconn posted weaker than expected profit growth and Governor Walker lost out to his Democrat challenger in the midterms. 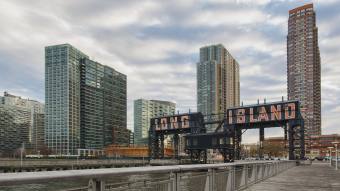 The US e-commerce company is to build major offices in New York City and Arlington, Virginia, after concluding its 14-month search for a second base with a split verdict