Demna introduces his latest ultra-luxe proposition for the house

It may surprise many that Demna, the Georgia-born artistic director at Balenciaga since 2015, spends most of his time mulling over how to perfect the armhole of a garment. Not, as the internet might suggest, the next streetwear collaboration, genre-defying fashion show or Duchampian take on a luxury accessory. “I am obsessed with the armhole and the shoulder – this is my primary preoccupation, even when I am on vacation,” he says.

Demna is an ideas man. He is also one of the most relevant designers today, challenging what we know about luxury with endless propositions, from “distressed” £1,000-plus sneakers to crisp-packet bags and The Simpsons. “I just let myself be like a factory, absorbing things, filtering them down and turning something into an idea,” he says. And yet he prefers the title of dressmaker over artistic director. Since his time at Maison Margiela and then Vetements, the design collective he co-founded in 2014 where he deconstructed and re-examined everyday silhouettes, he has explored the construction and gesture of an inventory of garments.

This month, Demna reveals a very pure manifestation of his vocabulary with a new Balenciaga line called Garde-Robe (French for wardrobe). The 65-piece line, which debuted at Balenciaga’s SS23 show at the Wall Street Stock Exchange in New York in May, encompasses what the house calls a “new era” of ready-to-wear: an ultra-luxe interpretation of wardrobe staples that sits between the mainline collections and haute couture in both craft and price. The offer rounds out Demna’s repertoire at the house following the launch of menswear in 2016 and the reintroduction of haute couture last year, a half century after founder Cristóbal Balenciaga shuttered his atelier.

Garde-Robe presents a chance for Demna to explore timelessness, expressed not just in the essence of the silhouette but through an elegant, sombre palette and a level of finesse, both outside and in. In this, it reflects the studied perfectionism of Cristóbal Balenciaga himself. “A good jacket is still a good jacket 10 years later,” Demna says, and in this debut, there are many: rigorously cut wool suit jackets (£2,250) and oversized raglan cashmere car coats (£3,450). There is much long-lasting appeal, too, in the line-up of silk and fine viscose hooded, pussy-bow blouses, a unisex slit pencil skirt – layered over large, tailored pants – and an ultra-fem, polkadot day dress emboldened by his trademark shoulder.

The collection channels the Wall Street energy of the show, particularly the Reagan era of big shoulders and big money. “I wanted it to be about power dressing because I’m very interested in it from an anthropological point of view,” Demna says. “Like, what does power dressing mean?”

To enhance this vision – and perhaps to demarcate the clothes from the streetwear tropes one might associate with Balenciaga, including a new Adidas collaboration revealed on the same runway – a new campaign starring the French actress Isabelle Huppert has been released. (Huppert is a distinct counterpoint to Demna’s former collaborator Kanye West, who opened the SS23 show in October and with whom Balenciaga severed its association later that month, following West’s antisemitic comments.) But the mood is less aspirational and more acidic: Huppert is cast as a toxic boss.

In a world of fantasy, Demna, who fled Georgia by car and eventually by foot in the 1990s during the ethnic conflict, is still a realist. “I come from a Soviet culture where we didn’t really have a right to dream or escape into fiction. Everything you see, that’s the truth… and I think it is part of who I am, whether I want it or not.” Reality – or a version of it – has long been his mode of expression. Be it when addressing the street, global conflict, climate change or capitalism, he has never subscribed to the luxury-as-fantasy marketing model. Even as a student, he says. “That is what I hated about fashion. I always thought, ‘Why can’t we talk about what matters: to art, to society, to consumers?’”

Certainly, there are those who find his message as the artistic director of a heritage house incongruous. But his approach has reaped profits. Parent company Kering does not release individual figures for Balenciaga in its financial reports, but chairman and CEO François-Henri Pinault stated in 2019 that the brand had surpassed €1 billion in annual sales and, according to market sources, revenue for 2021 was more than €1.5bn.

Still, while he says he has let go of the urge to explain his work, he admits to feeling frustrated when things are misunderstood or easily dismissed. Many were critical of the “trash bag” pouches he designed for the AW22 collection, or the aforementioned “destroyed” sneakers that retailed for $1,850. “Sometimes people get offended by certain things… but there is a reason for those things when we do them. It’s never accidental. I’m aware there will be a reaction, but I am not the kind of person that goes into a conversation with the audience. I think the best thing would be to agree to disagree and everyone can have their opinion.” What matters most to Demna is to examine and question things, in the same tradition of postmodernism. Without justification. “Really, being true to yourself and not caring about how it is going to work or are people going to love it. Is it going to sell? Am I going to get a bonus? So far, in my 13 years of career, I never had that,” he says. “But I have struggled to stay connected to myself. You have always to be grounded – fashion cannot take over my life.” 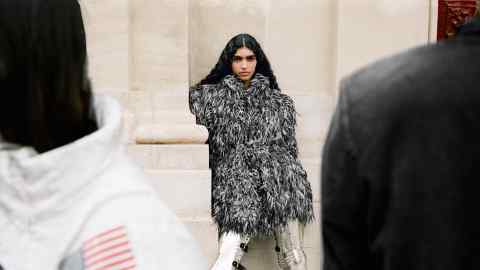 Since showing haute couture, Demna has stopped reading reviews. It was the haute couture experience, too, that helped to refine his current vision. “When I decided to work on couture, it changed my perspective on my vision of what I wanted to bring to Balenciaga,” he says. “It became a liberating pillar, allowing me to do other things in the ready-to-wear line… concepts I would hesitate to do before because I would need to balance the heritage with my own story.”

Garde-Robe has been a grounding influence. If ready-to-wear has seen him push his narrative further and reflect on current times, this collection has offered a change of pace like a meditative palate cleanser. The plan, for now, is to release a new range once a year. “There is not this urge to create something new all the time,” he says. “Let’s focus on making a perfect coat; a new version, in a new material – with a better shoulder. If I don’t have to reinvent a jacket every time or a shirt, I can perfect it.”

This article has been amended to reflect that, according to market sources, Balenciaga’s revenue in 2021 was more than €1.5bn