As ETFs helped push the price to record highs, Indian and Chinese consumers are selling the precious metal

Henry Sanderson in London and Benjamin Parkin in Mumbai

Warren Buffett always mocked people who invested in gold, calling it a useless metal that “gets dug out of the ground in Africa, or someplace” and a way of “going long on fear”. This year, however, the “sage of Omaha” joined investors including the world’s largest hedge fund Bridgewater Associates in buying into the latest gold rush, which helped push prices to a record high this summer.

During the second quarter, Mr Buffett’s Berkshire Hathaway bought a $565m stake in Barrick Gold, the world’s second largest gold miner. Shares in Barrick, which mines in Africa, Latin America and the US, have risen 37 per cent since the beginning of April. Also in the second quarter, Bridgewater invested in gold-backed exchange traded funds — which allow investors to buy physical gold like a stock — worth $316m, according to company filings.

Such interest from western investors has triggered a rise in the gold price from a low of $1,160 in the summer of 2018 to a record high of $2,073 an ounce in August, making the precious metal one of the best performing financial assets on the planet. Growing fears over the economic impact of coronavirus and negative bond yields have seen more than $60bn invested in gold-backed ETFs this year, 50 per cent more than in 2009 during the financial crisis.

The pandemic has convinced investors that gold belongs in their portfolios as a hedge against frothy equity markets, rock bottom interest rates and a fall in economic output. Some large investors want gold as protection against possible deflation caused by an economic slowdown or a converse rise in inflation as governments pump money into the system, according to David Tait, chief executive of the World Gold Council.

After initially falling in March as global stock markets collapsed, gold had rallied by 22 per cent by the beginning of August. “It has focused a lot of people who had historically looked at gold as the Armageddon trade,” says Mr Tait, “to look at it through a broader lens”.

Yet in gold’s traditional heartlands of India and China, demand this year has been at best tepid, with buyers in the two biggest consumer markets selling their gold holdings, or borrowing against them as prices hit record highs in local currencies. In China, gold is selling at a $53 an ounce discount to global markets due to the weakness in domestic demand and restrictions on exports of the metal.

With retail consumption a key signal of the commodity's strength for institutional investors, it is a divergence that could threaten gold’s rally if western demand wanes, as it did after the financial crisis when gold prices collapsed from a high of $1,920 an ounce in September 2011 to nearly $1,200 in 2013. Gold ETFs now make up 35 per cent of global gold demand compared with just 8 per cent a decade ago, but inflows have started to slow. The world’s largest gold ETF, the SPDR Gold Shares, registered withdrawals of money in September for the first time in eight months.

An abrupt halt to gold’s rally would hurt some of the world’s largest investors and remove one of the few bright spots in global stock markets outside of large technology shares. It would also lead to losses for retail investors who face an uncertain job market due to the pandemic and continued low interest rates on savings accounts. Gold prices have fallen 9 per cent since August’s high, while shares in gold miners have fallen by 13 per cent.

“One risk [scenario] here is that Asian buyers put a floor under the market,” damaging the confidence of retail investors who had bought gold-backed ETFs, says Adrian Ash, head of research at BullionVault, an online gold exchange. “But with demand being so abject in the big consumer nations where will that floor be?”

Popley Eternal, a jewellery megastore in a busy neighbourhood of India’s financial capital Mumbai that has traded for nearly 100 years, typically caters to the bustle of customers shopping for gold necklaces and earrings ahead of weddings and festivals. Items start at around Rs50,000 ($680).

But footfall has not recovered to pre-pandemic levels since the shop reopened in June after the country’s strict coronavirus lockdown was lifted. The three-month lockdown brought virtually all economic activity to a halt. Suraj Popley, the owner, says the company has cut its staff by around a quarter to 20, with sales so low that any item sold in the current environment is considered a “bonus”.

India and China combined account for more than half of global gold purchases. But demand fell by 56 per cent in India in the first half of this year, according to the World Gold Council and just over half in China, although Indian demand picked up in August.

In India the precious metal plays a uniquely important role in family, festive and religious occasions. The South Asian country holds the largest stock of gold in the world, according to UBS, with 25,000 tonnes owned by households and stashed in temples.

Even for investment, many Indians traditionally prefer to hoard the physical metal rather than buy into ETFs or other schemes. Gold jewellery confers status, while it can be bequeathed to children and pawned in times of need.

“There is an affinity towards gold,” says Terence Lucien, head of mutual funds at PhonePe, a Bangalore-based digital payments start-up owned by Walmart. “The way Indians have bought it traditionally, there have been people buying in excess.”

But demand for jewellery has plunged, hit first by the dramatic lockdown which forced retail outlets to close and now by the deep economic and public health blow the pandemic has dealt the country which has recorded more than 5.8m coronavirus cases and more than 92,000 deaths.

Weddings have been postponed as India records more than 80,000 new infections a day while the economic pain — gross domestic product contracted 24 per cent in the three months to the end of June — has reduced the appetite for ostentatious spending.

Shekhar Bhandari, head of precious metals at Kotak Mahindra Bank, says he expects demand to creep back up once the worst of the pandemic is over. “Have weddings been postponed? The answer is Yes,” he says. “Is the number of marriages over the [long term] going to decrease? No.”

The pandemic has, however, exposed a longer-term fall in demand for physical gold in the country of 1.4bn people, with rising financial literacy and access to products like mutual funds prompting many to diversify their holdings away from the metal. Consumer demand has fallen from an average of 900 tonnes a year from 2010 to 2015 to below 700 tonnes last year, according to UBS.

Several government schemes in recent years to channel demand into more financially productive assets, such as gold-backed bonds, have failed to stem the decline.

China, too, has been hit by a fall in jewellery purchases as a result of coronavirus restrictions, and a hesitation to buy gold at high prices. Demand in China hit its lowest level since 2007 in the first half of the year at 152.2 tonnes, according to the World Gold Council.

The social and economic disruption of the pandemic risks accelerating the decline of physical gold demand in India and China, undermining a vital consumer base for investors around the world.

This year, gold bars have been shipped from Asia to vaults in the US and London via refineries in Switzerland to back the rising demand for gold ETFs. But if western demand slows those volumes could start to weigh on the market, putting downward pressure on the price, according to Jeremy East, a Hong Kong-based former Standard Chartered banker.

“There’s no gold going into China and very little going into India this year,” Mr East adds. “That means the [western] ETF guys need to keep buying, [especially] if at the end of the year China and India are still not buying . . . That gold has got to find a home somewhere. The market needs more money to come in to keep absorbing this gold.”

Technology companies in India have sought to bridge the gap between physical and investment demand by offering “digital gold” apps. A variety of services allows consumers to buy and store the metal virtually before taking delivery of coins and bars if they wish to cash out.

Amazon launched a digital gold product in August, joining the likes of Mr Lucien’s PhonePe, Google and Alibaba-backed Paytm, which have in recent years launched their own offerings.

Varun Sridhar, chief executive of Paytm Money, says these products should help to shore up physical gold demand in India as appetite for purely virtual investments — like ETFs — remains limited. Paytm allows customers to begin buying gold for as little as one rupee.

“There’s a lot of emotion and sentiment to that yellow metal,” he adds. “A mutual fund doesn’t give you the satisfaction of wearing it at a party. I believe that over the next couple of decades, gold will continue to hold a very important place” for Indian consumers.

Yet demand for digital gold, though growing, remains nascent. Paytm says customers “who consider gold buying as a serious saving option” typically hold only between Rs3,120 ($43) and Rs5,200 worth of the metal on their platform.

Mr Popley, the Mumbai jeweller, expects a generational shift in demand as younger consumers instead opt for diamonds. He is preparing for the trough in demand to continue into next year. “People are not in the mood to buy much jewellery at the moment,” he says. They are “waiting to see what’s going to happen in the next three, or four, months”.

In China, consumers are also turning to new ways to buy, with two new gold ETFs launched in August. But the Chinese gold ETF market is only 3 per cent of the size of the US, with $4bn in assets. 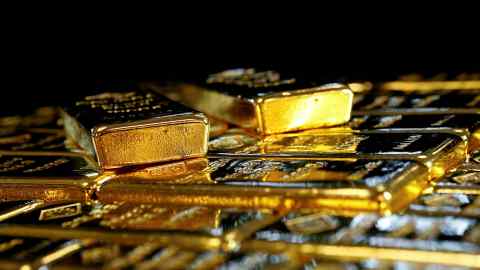 Chinese consumers prefer to buy gold bars that they store at home rather than ETFs, says Xiao Fu, an analyst at Bank of China International. “People in China still think about the traditional channels for buying gold such as jewellery or bars or coins,” she says. “And you can’t expect to make a lot of money in gold [compared with China’s equities market] so the younger generation invest in equities and bitcoin.”

Mr Tait says he believes new financial products backed by gold in India and China will grow “exponentially” over the next few years, aligning the markets with the west. That would better link Asia’s gold markets with Europe and the US, he adds.

For now, gold investors are digesting the impact of a second wave of coronavirus infections in Europe on the global economy. Instead of gold, many investors have flocked to the relative safety of the dollar.

Gold buyers are showing signs of fatigue, according to David Govett, a veteran precious metals trader. But with the upcoming US presidential election and no current end in sight for the pandemic, Mr Buffett’s change of mind on gold may not be a bad bet, Mr Govett says.

“Covid-19 cases are on the rise, governments are starting to panic again, economies are facing down the barrel of a second lockdown. All in all, it should be a perfect storm for gold,” he says. “There’s too much uncertainty in the world to be short gold.”