Dressing up again? Fashion tries to recover from ‘brutal’ crisis

Lauren Indvik in London and Leila Abboud in Paris

Within a couple of weeks of the Covid-19 shutdown in New York City, Diane von Furstenberg realised that the pandemic risked being an extinction-level event for her eponymous brand.

Nearly all of its stores were shut and retailers were cancelling orders for the colourful wrap dresses that have made the American designer a household name. The company was left with inventory it had already paid for that it couldn’t sell and a cash flow crisis so severe it began talks with potential investors about a partial or outright sale.

In the end, Ms von Furstenberg decided to lay off most of her staff and close all stores operated directly but one in New York’s Meatpacking District. In its new incarnation, DVF will probably continue to sell online and remain in China via a franchise agreement that includes more than 30 stores.

Coronavirus “forced me to reset a business model that is no longer relevant,” says Ms von Furstenberg. “As difficult as it is, it is also a beginning.”

The gradual end of lockdowns across Europe and the US is providing some much-needed respite for fashion retailers. In England, where shops reopened this week, long queues outside Primark and other stores hinted at the potential for considerable pent-up demand.

However, across the industry, from bargain stores on the high street to luxury brands such as Louis Vuitton, the impact of Covid-19 has been severe, upending an industry dependent on global supply chains, healthy levels of discretionary spending and tourism, and brick-and-mortar stores.

McKinsey has forecast the $2.5tn global fashion industry (apparel and footwear) will contract by 27-30 per cent in 2020, while the personal luxury goods sector — including fashion, accessories, watches, fine jewellery and high-end beauty — will be hit even harder, with sales down by 35-39 per cent. “Debt-ridden multi-brand retailers and cash-poor independent brands” were most at risk, it says.

On top of the slump in demand, the industry is desperately trying to adapt to the way the pandemic has shifted consumer tastes towards less-is-more. As many people have found themselves working from home, demand has shifted to yoga pants and leisure footwear, such as trainers and Birkenstocks. But will such casual looks stick around when Zoom meetings give way again to power lunches?

Fashion and luxury “have never experienced anything like this before”, says Thomas Chauvet, head of luxury goods equity research at Citigroup. “It was quite rapid, quite brutal and quite global.”

Nowhere has the pandemic hit harder than for UK high-street brands, many of which have for years been one crisis away from insolvency. Since the British government closed non-essential stores in mid-March, more than a dozen chains have entered administration, including Debenhams, Oasis and Warehouse parent company Aurora Fashions, Laura Ashley, Cath Kidston, Monsoon (owner of Accessorize) and Quiz.

In the US over the past four months, department stores Neiman Marcus and JC Penney have filed for bankruptcy; so have apparel brands J Crew, John Varvatos and True Religion. Brands such as Tommy Hilfiger owner PVH Corp and Gap have posted operating losses of more than $1bn each in the first quarter.

The same difficulties have been seen across the world. Earlier this month, Zara parent company Inditex announced it would close up to 1,200 locations, although the Spanish conglomerate has also seen a 50 per cent increase in online sales in the first quarter. It expects online to represent more than a quarter of total sales by 2022, compared to 14 per cent at the end of 2019.

For online fast-fashion purveyors such as UK-based Boohoo, the crisis has presented a rare opportunity. In May, the company raised £200m to snap up potential distressed assets, acquiring Oasis and Warehouse for £5.25m and the 34 per cent of Pretty Little Thing it did not already own.

With the new brands on its balance sheet, it is expecting a sales increase of 25 per cent in the current financial year. The resilience of its young customers, and the nimbleness of its supply chain, half of which is located in the UK, allowed it to pivot quickly to meet new demand for athletic styles and loungewear.

However, some online retailers have struggled during lockdown. Net-a-Porter’s business took a sharp hit after it decided to shut down its warehouses in the US and the UK for about a month to protect workers. Others have been slow or unable to upload new products to their sites, while soaring logistics costs put additional pressure on already unprofitable businesses.

Munich-based Mytheresa, the luxury online retailer, was one of the few able to keep operations running during lockdown. While the company’s sales remain depressed, it has seen a “strong recovery” in South Korea, China and Taiwan, chief executive Michael Kliger says. One bright spot, says Mr Kliger, is the number of new customers, particularly in Asia, who placed orders after brick-and-mortar stores shut down.

One of the few parts of the industry to prosper have been resale websites, as shoppers look for cheaper ways to get their fashion fix. Since April, second-hand shopping app Depop has seen “triple-digit year-on-year growth”, with usage up 150 per cent globally. For US rival Poshmark, the third week of April was its highest sales week ever.

The immediate pain from lockdowns was even more pronounced for luxury brands since they rely on brick-and-mortar stores for up to 95 per cent of their sales, according to analysts.

The pandemic has not only taken a psychological toll on luxury shoppers, who tend to splash out when the economy is healthy, but also decimated international travel that is key to the sector’s growth.

The larger companies are best placed to weather what some companies fear may be a prolonged period of depressed demand. LVMH, Kering, Chanel and Hermes all have strong balance sheets. It may prove harder for independent and young designer brands that do not have their own store networks, and those embroiled in turnrounds such as Salvatore Ferragamo and Burberry, especially if they carry debt.

The big conglomerates, already substantially larger since the last financial downturn, will become even bigger as they increase market share and their portfolios. While analysts expect luxury M&A will be relatively quiet in the short term, the market is likely to be “inundated” by financially distressed companies in the second half, says Mario Ortelli, managing partner of Ortelli & Co, an M&A advisory business. Citigroup’s Mr Chauvet expects Kering and Richemont to hunt for acquisitions, though they will be less interested in distressed assets, preferring to pay full-price for companies with the right market position and size.

Erwan Rambourg, head of consumer and retail research at HSBC, foresees a “swoosh-shaped recovery” for the sector, with sales declines bottoming in the second quarter and a steady recovery in the second half of the year.

Brunello Cucinelli, the founder of the eponymous high-end cashmere knitwear brand, thinks the rebound will come much sooner for the Milan-listed company. It has avoided any lay-offs, and is already seeing renewed demand in China.

“We were 2,000 people before the lockdown and we are 2,000 people today,” he says. The pandemic will be a shortlived crisis “that is only going to minimally change our plans”, he predicts. While the second quarter has been “painful”, he is expecting a positive second half.

Even after the pandemic-enforced lockdowns, luxury brands remain loath to push quickly into online for fear of eroding the exclusivity of the experience. While some brands such as Louis Vuitton and Gucci are more active online than in the past, there are still prominent refuseniks such as Chanel. The privately held French fashion house will not budge on its strategy to ban online selling for everything but its perfumes and cosmetics. 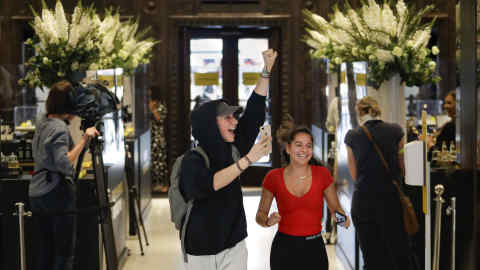 “We don’t intend, crisis or no crisis, to sell fashion, watches and fine jewellery online,” says chief financial officer Philippe Blondiaux. “We remain convinced that the in-person relationship between fashion adviser and client will remain central to the luxury experience.”

China, already the fastest-growing luxury market, will become even more vital to brands’ success. That will have an impact on both store networks — which will expand as Chinese consumers do more of their shopping in the mainland — and design.

Some fashion critics have predicted a return to minimalism and more discreet luxury in the wake of the pandemic, but others argue such designs are unlikely to resonate in China. While designers may show a more pared-back look on the catwalk, they often populate their Chinese stores and showrooms with a different set of styles.

“I laugh when someone tells me logos are dead,” says Mr Rambourg at HSBC. “That’s a very western comment. It’s fine to express yourself [stylistically] in China, to have product that is logo-heavy and bright and lively and playful.”

Paul Smith, the British designer, is unperturbed by the relentless growth of the conglomerates or the way that homeworking fashion is more casual.

Mr Smith, whose company turns 50 this year and who says he kept his Nottingham shop open during the coal miner strikes in the 1970s, when electricity was unavailable for more than half of the week, has reopened four of his five shops in France. While footfall is down 70 per cent at those stores, sales levels have already returned to 2019 levels. “That has nothing to do with modern technology, and everything to do with talking to people.”

There will always be demand, he says, for a well-made suit. “Quite a lot of people who enjoy clothes will want to dress up again.”