Its aim is to address the market’s gender imbalance

The number 30 has special significance for The Other Art Fair this year. To mark its 30th edition, the fair is hosting Not 30%, a second site dedicated to the work of 30 women artists. The new all-women fair shares the democratic principles of its sibling — offering artists the chance to sell their work without gallery representation — and yet it packs a distinct political punch, highlighting the underrepresentation of women in the art world.

Not 30% takes its title from data collected by the East London Fawcett group, which in 2013 reported on the gender disparity of the art market. Fawcett found that, despite female art school graduates outnumbering men, mid-career achievements reversed the bias: of the artists represented by London’s commercial galleries, and of the solo exhibitions at London’s major galleries, only 31 per cent were women. In 2016, the Freelands Foundation conducted the same research, and, depressingly, the figures remained the same.

“By the time you get to the gallery stage, when you want to see or buy art by women, they’re just not there, so where are they going?” asks Kate Bryan, arts broadcaster and head of collections for Soho House & Co, who has curated the fair.

“Collectors are predominantly wealthy white men — maybe they’re buying art to reflect themselves, or maybe they’re not seeing work by women because galleries aren’t putting it in front of them. It’s difficult to know.” For Bryan, Not 30% is both exhibition and manifesto. “It’s about raising awareness. We need to be noisy.” she says.

Not 30% is part of a broader trend to re-evaluate the position of women artists in the contemporary market. In 2016, the Saatchi Gallery’s first all-female exhibition, Champagne Life, showcased work from emerging international women artists, while earlier this year Victoria Miro staged Surface Work, a cross-generational exhibition of abstract painters from Paule Vézelay to Fiona Rae. The trend continues this autumn, with 21st Century Women at Unit London (October 6-November 3) — a group exhibition of British women artists, including Maggi Hambling, Jenny Saville and Chantal Joffe — and, at Frieze itself, an entire section, “Social Work”, devoted to female artists who challenged the status quo in the 1980s and 1990s. These exhibitions both redress and revise, reconsidering women artists previously overlooked as well as promoting those working today.

Not 30% aims to promote non-mainstream female artists for whom securing gallery representation has been difficult. Self-taught portrait artist Samira Addo, winner of this year’s Sky Arts Portrait Artist of the Year, will be shown alongside illustrator Hattie Stewart, known for her “doodlebombing” of women’s fashion magazines.

Yet it’s Sarah Maple who best captures the spirit of the fair. In a photographic self-portrait, the artist sits cross-legged on the floor, holding a placard that bears the fair’s name. With her thick eyeliner and tousled hair, she recalls Gloria Steinem’s iconic 1965 “We shall overcome” portrait. Maple’s is a protest piece, a call to arms for women artists facing inequality throughout their careers.

Though Bryan was anxious about ghettoising women artists, she insists the fair fosters an atmosphere of community. “I wanted to reflect the way women artists often work. It can be isolating: small galleries are closing, studio spaces fluctuate, and working from home means working alongside other commitments,” she says. “The fair is special because it’s about recognition and support. I want us to band together.” 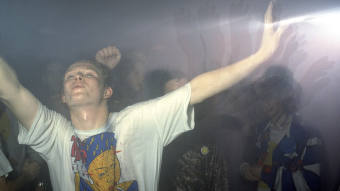