The second coronavirus lockdown dealt a smaller blow to the UK retail sector in November than the first nationwide shutdown as sales remained above pre-pandemic levels, despite a month-on-month decline.

Retail sales volumes last month were 3.8 per cent lower than in October, ending a six-month run of growth, the Office for National Statistics said on Friday. But the drop was smaller than analysts had expected and sales remained 2.6 per cent above February’s level.

The sector was subject to renewed Covid-19 restrictions — which varied in stringency across the UK — but gained support from consumers buying festive goods early and spending on DIY supplies ahead of a stay-at-home Christmas.

Retailers fared far worse in April, when sales plunged almost a fifth. November sales were 2.4 per cent higher than a year earlier and the ONS said survey evidence suggested that more than nine in 10 retailers had continued trading through the lockdown in some form.

The data adds to evidence that the UK economy has suffered less than feared from the rise in Covid-19 cases and associated restrictions in the last quarter of the year.

However, there was a stark divide between the worst and least affected, with sales at clothing stores down almost a fifth from October, while sales at food and household goods stores grew. Booksellers — which depend on customers browsing — were even harder hit, with sales down 40.3 per cent on the month before.

Helen Dickinson, chief executive of trade association the British Retail Consortium, said the headline growth figure “masks significant challenges for many businesses on high streets across the country, as sales have plummeted and they face the threat of rising costs they cannot afford”.

The Big Read
Crisis in retail: the UK town centres struggling to survive 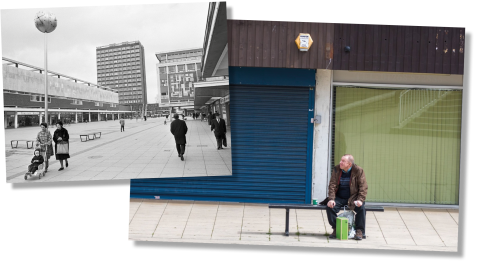 Yet retail’s resilience in November was not all due to online shopping. The proportion of online sales rose from 28.6 per cent in October to 31.4 per cent, but this was still below May’s peak.

Sales at food stores were up 3.1 per cent month on month, boosted by restrictions on restaurants and cafés and also by the number of “click and collect” users, the ONS said.

Sales at household goods stores continued to grow and were 15 per cent above pre-pandemic levels, with retailers reporting that people were buying DIY goods in preparation for the holiday, said the ONS.

Samuel Tombs, chief UK economist at consultancy Pantheon Macroeconomics, said that retail sales could rebound to a record high in December as people squeezed Christmas shopping into a shorter window.

But he added that pressure on high street retailers would build next year, with further lockdown measures possible in January, income support schemes set to end in April and the potential for people to switch back to spending on services once vaccinations were in full swing.

Sandra Horsfield, economist at Investec, said that with rising Covid-19 cases making tougher restrictions likely at the start of the new year, growth in 2021 could be weaker than expected “despite a much rosier longer-term outlook . . . as the rollout of vaccines gathers pace.”