How Argentina pulled off a deal in creditor impasse

Putting an end to what had become known as “the trial of the century” in sovereign debt restructuring was never going to be easy. So weary observers were left dumbfounded by the lightning speed with which a new government in Argentina defused a creditor dispute that had been dragging on since the country’s default on nearly $100bn of debt 15 years earlier in 2001.

A novel idea from law firm Cravath, Swaine & Moore was instrumental in achieving an important early victory for Argentina’s new president, Mauricio Macri, less than three months after the US law firm was hired in February to fix a seemingly intractable problem. Although the impasse had earned South America’s second-largest economy pariah status among international investors, by April Argentina had engineered a $16.5bn bond issue — the largest in emerging markets at the time.

“We stepped into this case with more than a decade of really negative history,” says Michael Paskin, the partner at Cravath in charge of the case. He explains that Argentina — and the lawyers representing it — had “entirely lost credibility” with the New York federal judge in charge of the case, Thomas Griesa. Furthermore, Mr Paskin’s groundbreaking plan to seek the lifting of court injunctions that had led to the stalemate situation he found when he took on the case ran the risk of contradicting numerous previous rulings. “One of the biggest hurdles was figuring out how to tread lightly on the history of the case,” he says.

For years, the populist government of Cristina Férnandez de Kirchner had repeatedly annoyed Judge Griesa, and refused to negotiate with the group of hedge funds — which she liked to call “vultures” — that were suing Argentina, with US billionaire Paul Singer leading the charge. The fiery then-president even derided Judge Griesa as “senile” when he held Argentina in contempt of court in 2014 after it defaulted on its debt for the second time since the turn of the century.

Everything changed when the business-friendly Mr Macri took office in December 2015. He was convinced that resolving the conflict with the so-called “holdout” creditors, which had rejected restructuring deals, was a precondition for mending the broken economy, since it would allow Argentina to borrow abroad again.

But injunctions slapped on Argentina by Judge Griesa — in exasperation at the Férnandez administration’s defiance — prevented the country from paying the rest of its creditors without also paying the holdouts.

That left Argentina stuck in a conundrum: while the court would not lift the injunctions unless Argentina paid the holdouts, the country could not do so without borrowing new money — which the injunctions prevented.

The crucial innovation that untangled the knot was Cravath’s motion for a “conditional vacatur”: this would suspend the injunctions, provided that Argentina fulfilled certain conditions — namely, repealing a law that prevented any government from paying the holdouts, and paying those holdouts that accepted Argentina’s offer by a certain date.

“There was no road map. It was not as if the injunctions had been set up to last for ever, but the exit was not at all clear,” says Mr Paskin, who maintains that the solution was “entirely novel”. “We are unaware of any court issuing an order to vacate longstanding injunctions upon satisfaction of conditions proposed by the defendant as prospective evidence of changed circumstances [that would justify the lifting of the injunctions],” he adds.

The court’s commitment to lift the injunctions if Buenos Aires kept its side of the bargain provided the clarity and confidence needed for Argentina’s congress to repeal a law that was blocking progress, for investors to buy new debt that would allow the holdouts to be paid, and for the holdouts themselves to accept the deal. 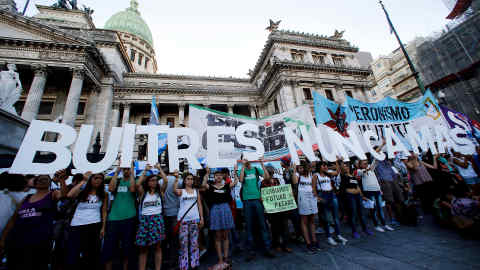 Cravath was not the only law firm providing creative solutions to the mess left by Argentina’s 2001 default. White & Case worked with a group of Italian creditors using protection provided by bilateral investment treaties, taking their case to the World Bank’s International Centre for Settlement of Investment Disputes (ICSID). Unlike a class-action lawsuit, this was a mass claim of a large number of investors — the original filing included more than 1m pages — that chose to submit individual claims jointly.

This not only validated the ICSID as a potential venue for sovereign debt cases, and for mass claims, but enabled the firm to broker a settlement that established a way to end the dispute amicably and contributed towards the final resolution of all Argentina’s outstanding sovereign debt. When the agreement was made on January 31, finance minister Alfonso Prat-Gay described it as the “first step in the normalisation of Argentina’s relationships with the international capital markets”.

Get alerts on Cravath when a new story is published