Benchmark US crude oil prices traded with negative prices for the first time in history on Monday, sending shockwaves through the global energy sector.

But what are negative prices and what do they mean for the wider industry?

US oil prices traded below zero for the first time ever, meaning producers or traders were essentially paying other market participants to take the oil off their hands.

It is the clearest sign yet that coronavirus, which has cut oil demand by up to a third worldwide, has turned the US oil market on its head.

The price crash came as the US benchmark oil contract, known as West Texas Intermediate, headed towards its expiry date for May delivery, the month when demand hit from lockdowns and travel restrictions is expected to peak.

Each month WTI future contracts, which trade on CME Group’s New York Mercantile Exchange, need to be settled with physical delivery of crude oil, giving a real-world link to one of the world’s most heavily traded derivatives.

Normally this happens each month without incident or drama. But Monday was different. Analysts believe a lack of available storage capacity at the WTI contract’s delivery point of Cushing, Oklahoma — known as the Pipeline Crossroads of the World — set off panic among traders holding derivative contracts, who found themselves with nowhere to put the oil.

WTI opened for trading on Sunday night at $18 a barrel. By the end of the day it had dropped to as low as minus $40 a barrel. 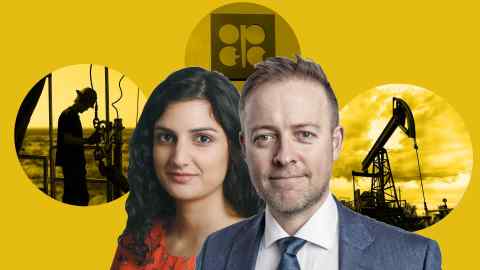 “With adequate storage in Cushing unavailable to those who need it, selling intensified,” said Ann-Louise Hittle at consultancy Wood Mackenzie.

“This issue is most intense for May WTI because oil demand is at its weakest, with full coronavirus containment measures in place across much of the US. Storage at the Oklahoma facility is expected to be full within weeks.”

As of April 10, Cushing’s tanks housed 55m barrels of crude, or 72 per cent of working storage capacity of 76.1m barrels, according to the Energy Information Administration. The remaining capacity was not necessarily available to those who had not already leased it.

CME Group said its market was functioning, adding that the negative price suggested that spot and futures prices were converging as designed.

“Today’s negative settlement price in the May WTI futures contract reflects both the global oversupply of crude oil and high levels of storage utilisation in the United States,” the exchange operator said late on Monday.

Traders with long-term leases were probably able to score huge profits. WTI contracts for delivery in June are still trading above $20 a barrel, even though they have fallen from near $60 at the start of the year. Get paid $30-$40 a barrel to take the oil, then sell it forward in the futures market for $20 a barrel.

What will it do to the sector?

Several casualties will be visible as the dust settles on Monday’s unprecedented price rout. They range from traders left holding contracts that lost almost $60 a barrel in a single day, to US industry executives who only a few days ago were hailing an Opec deal that was supposed to put a floor under the oil price. That floor was obliterated on Monday.

One day’s trading of a contract on the eve of expiry will not on its own cause significant damage to the US energy sector — but sub-zero prices will tarnish the commodity’s brand as a safe investment, especially among retail investors that piled into oil contracts in recent weeks.

But the biggest worry for the sector is the colossal imbalance in US supply and demand that underlies Monday’s flash crash. As the coronavirus lockdowns spread and unemployment rises, the US is now on its own producing 2m b/d more than its slowing refineries need, and lacks available storage to handle the excess, say analysts. Consumption has to leap higher, oilfields need to be shut sooner or new unknown storage capacity needs to be found faster.

Until the imbalance is fixed, prices will remain low and volatile, crippling the sector and forcing widespread distress on producers. The May contract’s capitulation is a nasty sign of a deeply dislocated market.

How will the main players react?

Sub-zero oil prices are an embarrassment for Saudi Arabia and Russia, which just over a week ago agreed the biggest co-ordinated supply cuts ever — and President Donald Trump, who pushed them to seal the deal.

Their powerlessness in the face of the demand collapse was plainly visible in Monday’s capitulation. Despite Opec delegates feeding rumours of deeper and swifter cuts and more talks among producer nations led by Saudi Arabia and Russia, they are unlikely to help.

Even a doubling of the Opec supply reductions, due to start in May, would do nothing to add storage capacity in Cushing now.

It is an embarrassment for Mr Trump, who set out to protect the US shale sector after being extensively lobbied by industry executives in recent weeks. After an agreement was reached between global producers he called it “a great deal for all”.

The federal government has some measures it might now pursue, including urging deeper cuts from Opec; tariffs on foreign oil imports; freeing up more storage capacity, including in the Strategic Petroleum Reserve (SPR); paying producers to keep oil in the ground; or extending financial support to oil companies. All have been discussed at various levels of the US government. 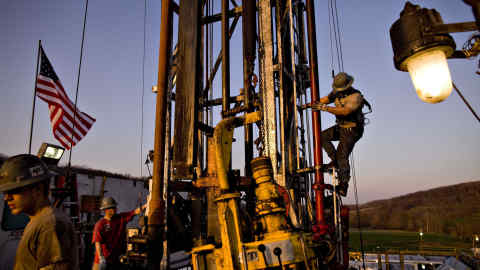 Mr Trump reiterated on Monday evening that he was looking at putting as much as 75m barrels of US oil in the country’s SPR, filling the emergency stockpile to the brim, but he has struggled to win funding from the US Congress.

In Texas, the price collapse may alter a recent debate in favour of a proposal to mandate production curtailments on companies operating in the state. A hearing on this idea was held last week and the Texas Railroad Commission will rule on Tuesday. “We now see an emergency pro-rationing measure as a viable outcome,” said analysts at Clearview Energy Partners in Washington.

Is this the bottom?

The May WTI contract was expected to suffer, as demand takes the biggest hit from lockdown measures in force across the US and coincides with a flood of supply and storage tanks at Cushing set to fill up. But the coming weeks will see swaths of the country still under travel restrictions.

Domestic production is eventually expected to fall sharply, possibly by more than 10 per cent, but it may not happen soon enough as producers endure a war of attrition. The June contract, which fell 15 per cent on Monday but clung on above $20 a barrel, is unlikely to be in the clear, even if some of the selling pressure eases.

Brent crude, the international benchmark, is better insulated as it is a seaborne crude, making storage less of an issue as long as traders can charter supertankers. Brent is trading near $26 a barrel.

But memories of Monday’s panic will not fade quickly for traders.

The industry is also watching for the knock-on effect on WTI-linked crude grades, as the benchmark contract is used to help price barrels from all over the region, including oil from Canada, Mexico and other US regional crudes.