A messy digital footprint can cost you a job

EMBA students must do more than just hide the embarrassing stuff

Social media has transformed the job market in just a decade. On one side are employers taking an increasing interest in the digital footprints of job applicants. On the other, are those applicants and employees who want to make sure they catch a recruiter’s eye because they are a good fit for the job — not because of a Facebook photo that is embarrassing, or worse.

These markets have generated a flourishing group of companies such as Fama Technologies, which uses machine learning to sift through online posts and identify undesirable traits and habits such as sexism, racism and drug use.

Online reputation consultants help people make sure their Instagram and Twitter accounts do not raise red flags in the first place.

“You can’t imagine . . . that your private life and your business life are perfectly separable for your prospective employers and partners,” says Michael Fertik, the founder of Reputation.com, a pioneer in the field of reputation management.

A 2017 survey by CareerBuilder, the US recruitment company, found that 70 per cent of companies used social media to screen candidates when hiring, up from 60 per cent in 2016 and 11 per cent in 2006. More than half of employers had found postings that led them not to hire a candidate for an open role, CareerBuilder says.

Fama Technologies says it has helped its corporate clients screen more than 11m pieces of publicly available content from employees and job seekers. About 14 per cent of the content examined raised flags for sexism or misogyny; 10 per cent raised alarms for bigotry, racism or hate speech.

Fama claims it is protecting the reputations of companies and improving hiring, potentially saving a company that employs 1,000 people more than $1m a year from increased turnover and less absenteeism by not hiring badly behaved employees.

In Europe, a tighter data protection regime has limited the extent of screening that employers can conduct while hiring. Guidelines published last year said companies would require a “legal ground” to check applicants’ social media profiles, specifying that the data collected must be necessary and relevant to their job performance.

But the practice is increasingly the norm in the US — and it is not just employers who may be digging into your internet history. The American Civil Liberties Union has asked the US government to disclose how federal agencies from the State Department and the Federal Bureau of Investigation to Immigration and Customs Enforcement are monitoring social media accounts, including those of immigrants and people applying for visas.

Online profiles have become weapons in political disputes: in the past year a number of high-profile people in entertainment and journalism in the US have been targeted by right-wing activists over old social media posts.

In July this year, Walt Disney fired James Gunn, the writer and director of its Guardians of the Galaxy film franchise, over old, deleted tweets containing distasteful jokes about paedophilia and rape. “The offensive attitudes and statements discovered on James’ Twitter feed are indefensible and inconsistent with our studio’s values and we have severed our business relationship with him,” the company said in a statement. Gunn, for his part, apologised on Twitter, saying “I used to make a lot of offensive jokes. I don’t anymore.”

Even without touching on controversial topics or making off-colour jokes online, the trail we leave as we move through an increasingly digital world can have long-lasting consequences.

“What’s changed in the last year or two is the average consumer is starting to care about this,” says Patrick Ambron, chief executive of BrandYourself, an online reputation management company. “Now everybody has a really big online presence compared to a few years ago. And even if you’re not active online, your friends are. There are thousands of images and social media posts going up and you’re being tagged.”

While many big reputation management companies target businesses struggling with bad publicity, or individuals caught in embarrassing and damaging scandals, BrandYourself has broadened its aim to not only help people manage bad search results, but also to suggest ways of building a robust and relevant digital profile.

“There are more tools that are helping employers screen better. Their goal is to use data to make better hiring decisions,” Ambron says. “Employers are not just looking for negative things — they want reinforcing factors as well.”

Making sure an employer can find LinkedIn or blog posts you have written about a topic in your career field or links to news stories you have shared on Twitter or Facebook demonstrates you are engaged in your industry — and can help buffer the impact of less flattering information.

Business education
How to build a positive online reputation 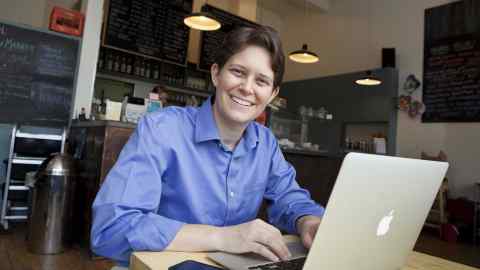 “Employers like to find this stuff, so you’re giving yourself an edge. And you are less vulnerable to something negative derailing things in future. Say after a bad breakup, the other person goes online and trashes you. If it has nothing to compete with it’ll go to the top of results,” Ambron says.

“Think about it as inbound marketing for your professional life,” says Fertik. “In the same way you put some thought into how you dress for the office and an interview, there’s no reason you should not be reflecting that care online.”

Online activity can also present the opportunity to show personal interests that can complement your professional presentation in your resume or CV.

“I would hire somebody in a heartbeat with strong opinions if they back it up with activism and work,” says Chris Allieri, founder of the public relations consultancy Mulberry & Astor. He points to his own involvement with animal welfare, including sitting on the boards of several animal protection organisations. “People look me up online and they know that this is what I support, it’s what I do.”

However, reputation experts caution that keeping the subjects you engage about on social media consistent with your professional presentation and industry remains important.

“I can’t tell you how many investors in venture have remarked to me over time that they notice a CEO or executive is constantly posting online about things not connected to his or her company,” says Fertik. “Setting aside who you are online, just the fact of how you are [behaving] online is meaningful.”

What you can do to improve your online persona and reputation

BrandYourself scans your Google search results and profiles on social networks including Twitter, Facebook and LinkedIn to develop a reputation score. This takes into account not only the negative impact of posts or pictures that could raise red flags, but also how well your online persona is “optimised” — how much it shows positive and pertinent information about you.

When I tried out the company’s free tool to scan my search results, my reputation score was 400, or “fair” — the yellow midpoint of its scale from “very poor” (red) to excellent (green).

“We didn’t find anything that could cause you to fail an online screening,” I was relieved to read. But, it added, “you don’t have any positive content that would impress during an online screening” — not a comforting assessment of the reach of my writing (or, perhaps, a damning evaluation of the FT’s search engine optimisation).

BrandYourself’s tool suggested several steps I could take to improve my score, such as freshening my LinkedIn page, rewriting my Twitter profile biography and setting up a profile page on BrandYourself’s own website. For a deeper dive I would need to upgrade to its $100 a year premium subscription. It is a business, after all.